What’s the best way to run OGS on an old computer? (In my case one with Windows8 and a very limited USB mobile broadband connection.)

I suppose this will start some sort of a flame war by the MS supporters, but I think most safety- and privacy- conscious computer people will suggest that you stop using Win-8. Because your computer is “old” (hardware specs are appropriate here to evaluate your options), it might not be able to run Win-10 (and the “privacy crowd” would most likely tell you not to run it even if your machine is capable).

So probably the best options are to try one of the easier to use Linux distributions, such as (and this is only a very brief set of possibilities) PeppermintOS 8, Mint 18.2, or Linux Lite (the links provided take you to the distributions home page. The distro’s forums (especially for PeppermintOS) is your best bet for getting assistance with discovering whether you hardware is capable of running the distro, with installing the distro and with using it (should problems occur because you have perhaps never used any operating system other than MS.

I have used all of these and find them easy for people new to Linux. PeppermintOS is my favorite, but this very subjective and your preferences are perhaps different.

I hope this helps.

While there are many arguments for or against any OS, OP was simply asking for the most reliable way to gain access to the site and never mentioned anything about security or privacy.

But to be fair, the OP asked for the best way to run on old hardware, and a legitimate answer to that question might be “change OS”.

And that would be a legitimate argument @GreenAsJade, I too believe Linux is a far better choice for computers getting on in life and am in the process of converting my old macbook to run off linux in the near future.
But @Musash1 didn’t mention Linux being “a better operating system for computers with low resources” but rather “most safety- and privacy- conscious computer people will suggest that you stop using Win-8”

True, I did not say specifically that Linux is “a better operating system for computers with low resources” – but that is what the second paragraph is about, if you read it again.

I will also stand by my other assertions until proven wrong.

Oh for Christ sake, the OP just want to play a game of Go and you suggest him to install a new OS?

And I don’t see why the OP can’t run OGS on his old Windows 8. Come on, we are not talking about some online RPG game involving heavy graphics. It’s just a flat screen opening in a normal browser. What is the big deal?

I think the big deal is that OGS doesn’t run in IE? At least, that’s what I think I read just the other day in a different thread…

In my particular case, Chrome appears to be fully compatible with all the site’s features but it has a tendency to run catastrophically slowly sometimes with repeated ‘Error submitting move’ messages all but destroying live games.

I suspected my connection was the problem but then I found that IE10 (preinstalled) was much, much faster. Approximately 5x ! and still worked well when Chrome would not. Unfortunately IE10 is not compatible with all OGS features. I learned this the hard way when I first started on OGS. For example; chatting in game triggers one of the buttons above the chat window when you press ‘Enter’ causing unintentional undo requests and passes. It’s also very hard to access the RHS menu during games and impossible to create a custom game.

Installing a new OS would not be my first choice but I am broadly interested to hear what does and doesn’t work well for other people.

Thankyou to all those who have responded so far and I hope this topic is also of help to others.

All is not in vain. I finally figured out what OP stands for. 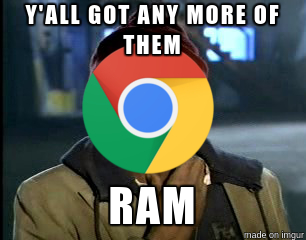 And since IE is usually not working, the next logical question would probably be have you tried Firefox?

chrome used up lots of resources when you have many taps and/or extensions running.

but I still find it OK on my old computer with only 2gb of ram and running windows 7, so unless yours is like 10 yrs old otherwise it should be fine.

close some tabs and uninstall the extensions you don’t need. call up task manager to see exactly what is holding you up. (on a blank tap press shift + escape). That should give you a clue.

and sometimes when I left the OGS homepage on for a long time (i play correspondence) waiting for other players move, some time due to memory leaks (some computer bug) the page may eat up lots of memory. in those cases just close the tap and then wait a few seconds and open it again.

If you continue to have problems with Chrome, Opera is much more lightweight and I believe it has better html5 compatibility than IE10 might be worth a try

In my particular case, Chrome appears to be fully compatible with all the site’s features but it has a tendency to run catastrophically slowly sometimes with repeated ‘Error submitting move’ messages all but destroying live games.

That’s horrible. That really shouldn’t happen, chrome is the most tested browser, with firefox a close second

If your computer is running windows 8 it can’t be that old, it should have way more than enough power to run things unless either I’ve done something bad like added a memory leak somewhere, or there’s some third party reason for bad performance on your computer.

If you open up “System Information” on that computer, can you tell me what kind of CPU you have, and how much ram you have? You can access this by by typing msinfo32 in the ‘Search’ box in the start menu. (I think it’s also accessible in some way through the control panel somewhere, but I forget the specifics)

Thankyou anoek. It is particularly useful to know which browsers are most tested so I’m not chasing my tail on that issue. As you say, my computer should and does have plenty of capacity. i5-3210M 2.5GHz processor with 4GB of ram. It sounds very much like the problem is primarily at my end and I now have some options I can pursue though some of them will have to wait until I have access to a more generous connection.

have you read and try my suggestions a few box up?
called up task manager when it is getting slow and it will tell you exactly what is holding you up.

Have tried, yes. Thankyou for the suggestion as it will be useful in future. Unfortunately on this occasion it only showed plenty of everything to spare. I have tried everything mentioned in this thread except a new OS. Firefox and Opera both failed to load OGS for me. At least now I can be very confident that the problem is at my end. My next port of call is to update my current OS but that will have to wait as my own connection only gives me 1G/month download. In the mean time Chrome sometimes works (as now) and IE10 provides sufficient back-up that I won’t default on any correspondence games.

My way solving similar problem:
I have Windows XP and computer form 2003 year. It becomes recently very slow (especially in internet - I use Firefox). Now I have installed (along with XP) Linux “Xubuntu” - it has very light graphic interface - and now i have “new computer” - it works almost so fast, as in 2003, when I bought it. And especially OGS pages opens almost immediately. And I still use Firefox.
BTW: After a couple of days and some simple installing work I almost stopped using XP. All old data are ofc available.
Greetings to all Win-users

Now I have installed (along with XP) Linux “Xubuntu” - it has very light graphic interface - and now i have “new computer” - it works almost so fast, as in 2003, when I bought it.

Your system is not only faster, it is now much more secure as well.

I know it. Basically it needs no anti-virus programs

Okay, sorry to go way off topic here, but I can’t resist.

I am glad you are happy with your new system and indeed it has many advantages! But people please stop this “my system does not need protection” nonsense. It was the same with apple fans some years ago and now that it has finally died down (because after seeing all the bricked computers they are finally starting to realize that it is not that simple) linux users are starting the same. It’s only harmfull to good people and beneficial for malicious program developers.

Every computer and every OS is only as secure as the users makes it. There is no magic solve all the problems OS (duh) and there are many viruses, or other attacks for unix based systems as well. And with the growing popularity of these systems the attacks will grow in number as well. So be part of the solution and do not wait till after…

There are ransomwares for linux (which are all the rage now), phishing sites work all the same on any system, and blablabla. And even if the harmfull attachement does not work on YOUR computer, you still wouldn’t wanna forward it to a friend with a windows machine, would you? We are all together in this. Please reconsider your opinion. A good AV or at least a firewall is a very good idea on ANY system.
(sorry for my ranting