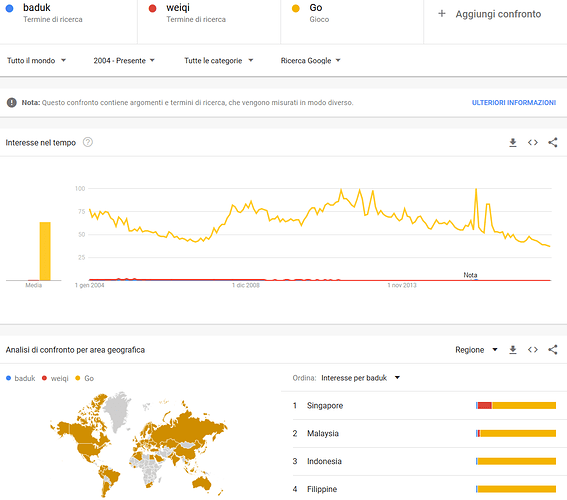 I thought I could make a graph that shows how much time/game it takes to gain one rank. It would’t account for difference in effort, but still a fun little thing to do. However, ogs ranks are really spastic. Often times players gain/lose several ranks at really short time. So if someone stayed at 7k for month, and then got to 6k and 5k same day, then on the paper it would be 7k->6k takes month and 6k->5k takes almost nothing, which is counter-intuitive. I still made a graph, but I have no idea if it even makes sense. Maybe someone can think of something better. 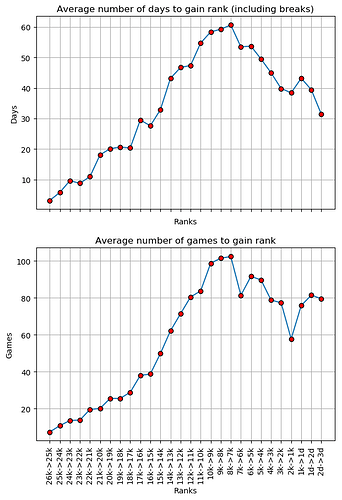 I think that the whole concept of rank-over-time is misguided.

I’ve often said that the OGS rank graph should be against games played, not calendar time.

Same with your initial concept.

Is it still so spastic when plotted against games? I see the plot, but it doesn’t tell me if it was nutty data or not…

BTW the results look intuitively right. We have this phrase “asymtotic DDK” which describes how most DDK’s graphs look. That is reflected in the increasing time to rank as you approach SDK.

Looks less spastic but still players gain several ranks at a time. Maybe we should make Fourier transform out of it, kinda looks like sinusoid. Example: 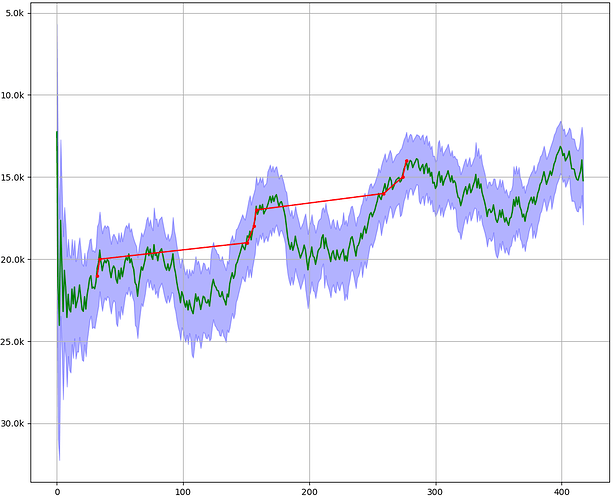 I would pick the axes “rank” and “percentage of games played at that rank”. I suppose ff you want a time-sensitive component, you can implement an “in the last x months” window.

If you want to get really fancy you could make it an xyz-plot (rank, % of games, unit of time); you’d literally get a “track” record. ;D If you want to counteract the bias resulting from people playing 1000 games one month and 0 the next, you can define each tick of time as x games played. Obviously that kinda requires a lot of datapoints.

Whatever the flaws of the graphs, the impression I get from them seems right in several aspects. The rise from newbie to strong DDK is a relatively smooth, steady curve reflecting fast improvement as elementary concepts are learned and mistakes overcome. The hump at about 12k to 7k nicely coincides with the transition from DDK to SDK, which I think many players would say matches their experience. Then, except for the outlier at 2k-1k, it levels off at a comparatively high interval, again matching what I have heard, that ranking up is much slower at the strong SDK and dan levels. In sum, I found this interesting.

Less than 1000 days from 26k to 3d.
Now we have an answer to give when someone asks “how long it takes to become a strong player”?