This solid, slower game is a fair example of my overall style, strengths and weaknesses. I think you can see for example how I lack the rote-learning of others around my rank. I’m curious to know what overall impression of my play it gives to stronger players, eg 2k+? 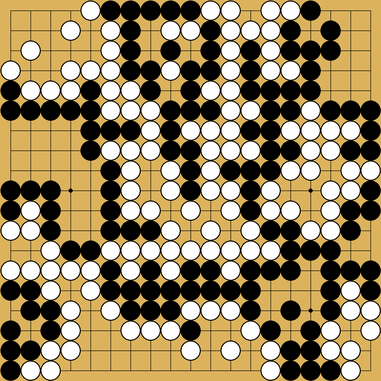 You play kind of like a serial killer, the kind who looks ordinary enough—even trustworthy—until he tries to shiv you over and over again without warning. I’m sorry, but that’s my impression.

I found some things that fit your impression of yourself, like the first- and second-line plays just out of the opening (keep your phases in order; endgame moves belong to the endgame). But afterward you wasted no time in poking out eye space, even when it didn’t clearly benefit you to do that. It seemed a little unnatural, so I gave some alternatives in the review.

I’m happy to take any questions you might have about it. 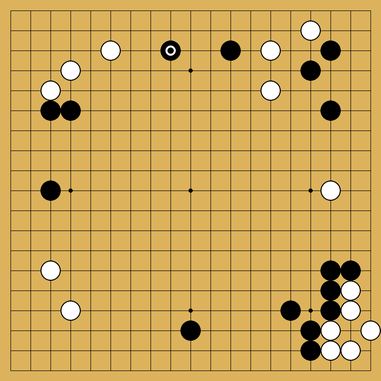 Thankyou sooo much for looking at the game. I was genuinely excited as soon as you liked the first post as I am a BIG fan of the way you explain things.

I will carefully look at your review and get back to you.

Thankyou also for giving me a good laugh to power me through the day. Even before I look at your review, I suspect this observation of yours is a result of my early Go history involving a lot of handicap games against even weaker opponents than I.

I hope you find my comments self-explanatory.

I can strongly recommend looking at this review for any sdk player or anyone who particularly wants to know how to kick my butt.

Mark5000; Just one question. Is my summary of the bottom-left correct (left in chat of your review).

Some of my extra observations as a player of similar rank to you.

I don’t like White’s kick (10) and low fix (12), they feel vulgar. I’d consider not fixing immediately with (13), and instead playing more quickly with F3, taking the initiative on the bottom side (also I think your immediate extension is also fine).

I’m not very familar with the (16) attachment against the high shimari, but I wonder whether haneing on one side or the other might have been more effective. Still, your result was not at all bad. White arguably attached a little early.

I think you were a bit too optimistic in considering the shoulderhit (31) as sente. A simpler approach would have been to immediately attack the R10, eg. with the P10 cap. Note that you don’t follow up the shoulderhit until twelve moves later, so it clearly wasn’t that urgent in your mind either.

The right-side fighting is a bit strange to me, very direct. The armpit hit (33) wasn’t really an urgent move to make – you could have proceeded immediately with S14. White also had the option of playing on top with Q9, or just jumping out with P10, rather than responding directly at S10. That would make the S9 stone look a bit inefficient.

You played the (41) fix because White had the P13 Q14 O12 ladder. However, you could have instead broken the ladder on the bottom side with a move like G4 (although then White can ask for J4–J3 and a ladderbreaker, so it’s not that cut-and-dry). P12 also strikes me as a slightly awkward fixing shape as compared to P13, but that may not be important.

(45) is interesting to me. My first instinct as Black is to just extend up to G15, but your move is more active, even if the shapes are odd. I think (47) should push up to L16, though, or else White might take that point immediately as a turn and push your group further down. White plays quite passively on the top side, though, just responding to everything – eg. there is no reason he has to respond to (51) at that point. (57) also looks a little slow, and in the game we do see that White doesn’t respond.

I like (59) K5. Many SDKs would play the greedy and flawed J5 keima, leaving bad aji.

(69) T13 is not that urgent since White still has S8 for an eye on the side. I want to play in the centre somewhere but I’m not sure where. Perhaps at J12, since that’s a natural fighting shape and a place where White would probably want to play later. With (75), I’d probably just take the shape point at N8.