A strong dan with time on their hands decides to ‘connect groups’. They approach the local philharmonic orchestra who, it turns out, have never heard of Go. A trade is suggested: Steely Dan offers to speed track the orchestra up to an average strength of weak SDK. At this stage, they can follow the visible level of a game, even if sub-plot nuances escape them. The musicians, in return agree to record an orchestral soundtrack while watching a video montage of a specific game. (they already do this for high end production films & games)

Meanwhile, a strong dan on another continent gets wind of the idea and does the same (although they decide that a symphony orchestra would be preferable).

Time passes…[gotta have a montage, a montage]

“It’s impractical” the nay-sayers say. Yes it is, I am merely daydreaming. But one could achieve a much cheaper version if a ‘weak’ dan collaborated with an amateur DJ of comparable skill. (to be clear I’m not an amateur DJ, nor am I hinting)

Tell a story with a Go game

There will be story cues, open to interpretation by a game move by the player.

…Steely Dan plagiarizes the idea and reverses it. Cruises on over to the local improv crew and makes a trade: You put on a small theater improv, with cues inspired from a live Baduk Game which is displayed up on a Freaking Huge Display. In return, I’ll get you to a weak SDK level good enough to follow the top-level narrative of the game. I’ve seen the Kinkonauts do more with less. People google Baduk, and BAM, next thing you know all the Go Twitch streamers are flashing huge gold chains and diamond-encrusted headsets. You’re welcome.

I’m serious about none of this of course, just musing on how one might actively grow the Baduk player base…as are others

Making Go more popular is one of the most important missions of our project.

(although they decide that a symphony orchestra would be preferable)

I think an orchestral version would be lit

I liked the music. It reminded me a bit of Samuel Barber’s piano sonata. However, I didn’t see much correlation with the game. Music’s potential for play certainly makes it a natural for accompaniment of a game, but it is hard to pull off, I think.

Back in the 70s, I played in a chamber symphony in the world premiere of a similar fusion piece at the Folger Shakespeare Library. The music accompanied and simultaneously dictated at times the choreography of a “game” of pool featuring trick-shot champion Paul Gerni. An overhead camera projected the pool table on a screen for the audience. The composer, a fellow student who was already published, directed the action. I wish I could say that it went well, but I think the composer got mixed up at one point, and it became rather muddled. The music was very avant garde anyway, so I don’t know that the audience noticed. Sidelight: the composer forgot his suspenders and borrowed mine. Fortunately, my tuxedo pants were not too loose, though it was worrisome. I picked up my suspenders the next day at the music school office.

It’s a piece for two pianos

I was unaware of Haskell Small! I know some high end pianists who will find this intriguing. They don’t play Go yet.

but it is hard to pull off, I think

…which is why it can potentially be so impressive.

I made it into Calgary Go club irl twice this year. Piano Rengo was going bananas in the lobby when I arrived the first time, the Black and White seems poetically appropriate. Vincent and Steve, both 2 dan I believe, going at it on the Goban two floors above…open atrium all the way up 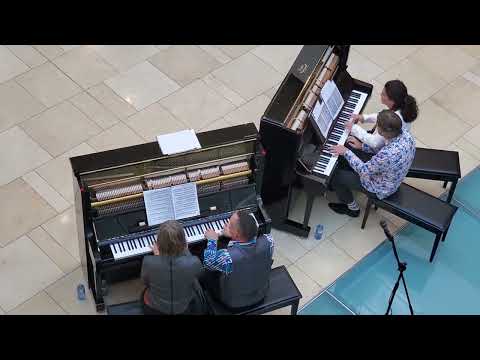 correlation with the game

I hadn’t especially been looking for much correlation when I initially watched it; I had simply looked at the general tension of it all (music became more tense, urgent, dramatic when there was a lot going on in the game, as opposed to the ‘calm before the storm’ in the beginning), but upon watching it just now, I noticed several things. Both White and Black had similar motifs for their early splitting moves, and the same was true for their attachments. Ataris and captures each had consistent musical ideas, as well as atari-connect sequences.

I think I noticed some musical consistencies with extensions as well, but I’d really have to give it another focused listen. I might ask Haskell more about it at some point, but it’s hard to figure these things out without seeing the sheet music, and without being certain which notes correspond to which piano lol

Impressive analysis! I noticed the general qualities but not any of that detail.