In addition to the above my reasons for thinking that this is one person is by the way he chats, and that all these accounts are around 1d. Sadly that is around my rank, which means that if this player makes a new account, I am almost sure to encounter him at some point, either in games I play, or games I watch.

So, I guess my question is how does OGS deal with this? I will be happy to provide the suspected accounts to an administrator. Or, should I just live with the fact that this person is out there? In which case this topic can be seen as a bit of catharsis on my part.

I suspect that you will be contacted by mods.

However, to everyone else I suggest: be persistent as well and report the account(s). I usually keep screenshots of said behavior to provide some context to mods if needed (especially if the abuse is in PMs).

Mods will probably IP-ban the user to prevent any more account creation.

If you don’t want to raise any fuss, you can block it, but this doesn’t solve the account creation problem.

You can report an account by clicking its name and clicking the report icon:

Or via profile page:

Have a nice day!

Why be so nice to the fellow? CALL HIM OUT.

There is another pattern of troll behavior that I expect the mods and all the regulars here already know about, but I will describe it FYI. The troll has a 6d provisional rank, but, when you look at the profile, has played no games, or a few games that have been annulled because of timeout. This troll or trolls will start a game with a dan player, play maybe 15 moves and then disappear, leaving the game to timeout, wasting the opponent’s time, and getting annulled. I’ve seen four different accounts in this pattern since I joined on Dec 1. I spotted these games consecutively, and the alias usually goes away in a day or two, so I assume the mods are shutting them down, and then the troll creates a new account. I noticed this because I’ve been watching a lot of games in the past month (I’ve been too tired to play lately, as I get up at 4 a.m. and work and commute long hours).

Thanks. When I notice it I do report it, but next time I’ll make sure to make some screenshots as well.

Have a great day too

I can confirm it’s a single person. He’s a long-standing trouble user with a history of dodging IP bans.

It’s best to report it and move on. If you need swift action you can also PM one of the active moderators.

And he is back!! I just timed out after the trolling started. Waste of time. 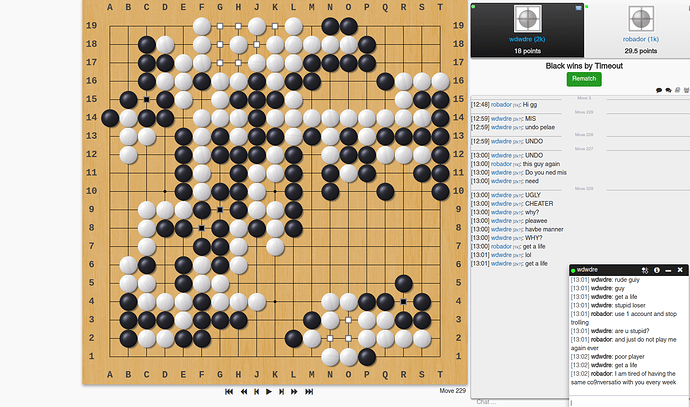 If only we could stop them permanently.

Starting in v5 we’re going to require email verification to play games (I’m pretty sure this is true). An unfortunate side effect of these idiots. Hopefully this will make the signup cost too great for serious trolling.

wow. imagine if your only source of entertainment was trolling go players.

Another incarnation I think: 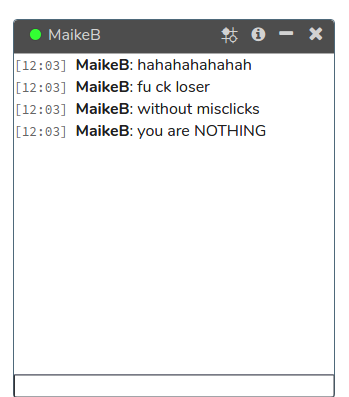 (edit)
This of course is based on the fact that he immediately starts about missclicks, something that my troll friend has been complaining about sometimes in games.

Yes, this appears to be the same person you posted about on Jan 25. However, he may not be a troll in the strictest sense of the word. An examination of MaikeB’s game history shows a fairly capable player, unless he is using a really good computer program to play. One does wonder, of course, about all the annulments. More important, though, is that anyone can see what kind of a player he is by the name of most of his games: “RIP.”

It’s definitely the same person. We have been struggling to shut him down for some time. He’s a persistent sandbagger and asshole. We ban him on site.

You may already know about this one, but if not…

See https://online-go.com/game/7820011 Seems to be another alias of the same troll (note the mention of misclicks). I suspected this person based on his name and rank, looked at his game history, and wondered how a person could win by 285 points. BTW, the board is obviously incorrectly scored. How did he do that? Hacked the scoring, or what? 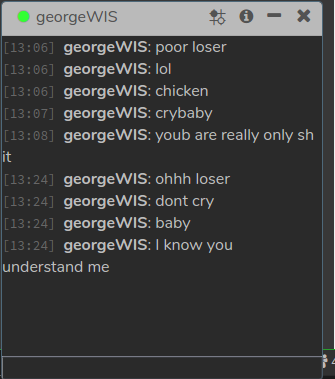 I have been playing on OGS since late 2014 and thus I dare to say that the tone has recently turned for the worse here. There appear to be more and more trolls. Reporting them to the administrator doesn’t seem to work, because there is no reaction. Just maybe one hour ago I reported one such case during an ongoing match.