Players not ordered by points in tournament view

Before players were ordered by points now they aren’t, e.g. Nine*Nine, NineNineNine 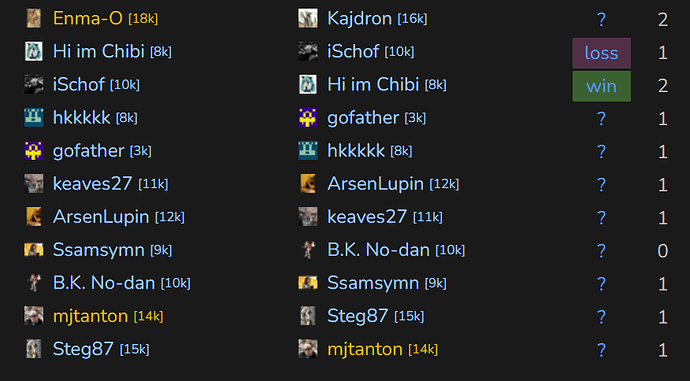 I did a search before doing that same report, but looked for the wrong words!

Looks like the bug has been addressed, but something still doesn’t work.

999 Rounds of 9x9 This is another silly tournament, this time it's 9x9 but with lots and lots of rounds (if it even works). Games themselves are meant to be relatively quick. Using "pause" may result in disqualification if it holds the tournament...

all players are sorted by points… except for the first of the list. 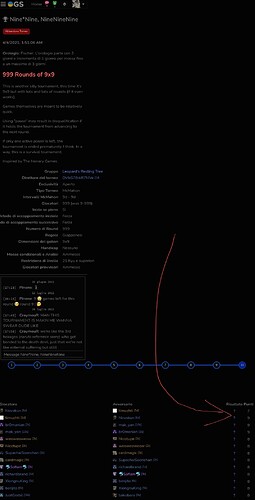 You can see how the games go in pairs, right. First some game then the same game but with players reversed. So it’s still ordered by ids.

Pairing players on points and then sorting games on points could probably give that result.

Now that we have a few games completed, we see that players order isn’t changed and the winner isn’t sorted anymore after getting one more point.

Bumping this. Is there any chance this can be tackled soon? This bug means that there is no efficient way to look at tournament standings, which for me takes about 50% out of the fun of playing tournaments.

Do we even know where the problem lies?
Is that front end or back end?
It seems to be just a UI feature, so probably front end.

If that’s true we “just” need to find a volunteer for the job!

Here would be a good place to start digging:

Also if anyone wants to create an issue on GitHub, I’d be happy to mark Good First Issue or something (as well as bug obviously

Looks exactly like the entrance of a rabbit hole!

Actually I can’t even figure out the meaning of those five lines of code.
Which language is it?

Should be javascript /typescript.

The Map object holds key-value pairs and remembers the original insertion order of the keys. Any value (both objects and primitive values) may be used as either a key or a value.

The sort() method sorts the elements of an array in place and returns the reference to the same array, now sorted. The default sort order is ascending, built upon converting the elements into strings, then comparing their sequences of UTF-16 code...

Looks like Round Robins use a completely different sorting algorithm and are also broken:

I think that’s just because they sort by points instead of rank.

This sort for top three players based on rank still works though:

Actually I can’t even figure out the meaning of those five lines of code.
Which language is it?

Heh I’m not sure it’s particularly illumintating without the context of the rest of the file. But basically, I’m assuming sorted_players (the variable that gets set by setSortedPlayers()) is where our player list is supposed to come from.

It gets sorted using the comparator compareUserRank(), so it’s possible a bug in that function would cause this issue.

(by the way, @shinuito’s right that it’s TypeScript. This file is using React and JSX heavily, so that would explain the extension .tsx and why this doesn’t look like vanilla JS)

Oh, look at this, it sets the constant “players” after attempting to sort them:

But compareUserRank() uses the players constant instead of the players that were passed in:

Looks like it was like that forever though. Maybe it used to run through this update function twice?

I’m quite confused about those “constants” that

I even did an university exam about compiled java but it was many years ago and I don’t recall anything.

I remember that sorting was working some time ago, maybe just some sorting was broken and I didn’t notice it.
Do you know how many distinct sorting algorithms there are?

Do you know how many distinct sorting algorithms there are?

So far, it looks like two. Here are how the comparisons work for each:

In this case, we only care about compareUserRank(), and @Feijoa has found the bug. To describe in slightly less technical terms, there is an lookup table called players that is supposed to map ID to a player.

The function compareUserRank() relies on the players table to be filled with this information. However, the table is empty at the time of sorting, and therefore fails!

I agree, and it’s very hard to pinpoint what change might have caused this. There were a couple large scale changes to that file in the last year (e.g. migration to functional component), but who knows how long the bug has been in there. Maybe some automated testing (currently none on this page) would help catch such bugs when they are introduced.