im an 10 k and was previously 8k but when i challange a game with no handicap pref i usually get a 6k accepting my game but when i put handicap stones as preferance i never get an answer from anyone so i think that this 6 k likes to p;lay me without handicap stones which is a little unfair is there any way that i can resolve this please

When you set up a new custom game, you can also choose rank restrictions if you wish to prefer against opponents of only a certain rank.

Some players just might not prefer to play handicap games, which seems less popular on this server.

In case you also play correspondence feel free to send me (4k) a challenge with handicap. (I don’t understand why so many people don’t like handicap.)

I don’t like playing against a handicap because handicap stones distort the opening in ways I don’t feel able to deal with. I suspect that many strong players don’t like playing against large handicaps because the effect of the extra stones is not linear. After about 3 or 4 stones, the effect is increasingly more than the actual gap in rank. Hence a dan giving 9 stones, for example, can lose to a player 14 stones weaker. This isn’t surprising since the board space is finite.

After about 3 or 4 stones, the effect is increasingly more than the actual gap in rank. Hence a dan giving 9 stones, for example, can lose to a player 14 stones weaker.

Not true. Winning statistics on the EGD show that when the strength gap is n ranks and the stronger player gives n handicap stones, then he wins more than 50% of the time.

Example of table of winning statistics:

I prefer to play without handicap stones because I don’t trust ranks too much (starting with mine).

I am surprised by the table, but I am not sure it is definitive. It seems to be based on kyu players on both sides. Since kyu games involve a lot more blunders, I am suspicious of it. Further, what a beginner can do with 9 stones is quite different than what a 10k would do with them. I doubt that it is valid to lump together data from matches covering the full range of levels (and for all we know, the levels involved might be biased on one side of the other of the range).

This reminds me of discussions about komi. I strongly suspect that komi has more importance for stronger players than weaker players, since weaker players lose so often by huge blunders.

In both cases, I have long wondered whether any body of professional, technical, statistical work (especially experimentation) has ever been done to resolve these issues. It seems like a good subject for someone’s Master’s thesis or Ph.D.

It seems to be based on kyu players on both sides

Winning statistics when the stronger player is dan are similar.

Very few players are stronger than EGF 4 dan. So most H9 games in this table are

I doubt that winning statistics in these 4 categories of matches differ a lot.

(I don’t understand why so many people don’t like handicap.)

As far as I can tell, reverse komi is much better, you and the opponent can play with their normal style and there are no passive defensive moves due to the handicap stones

(I do not know if there is an actual name for this strategy).

I dislike playing handicap games even if I am supposed to receive the stones for my benefit.
I’d much rather play an empty board and lose or get a reverse komi.

Well, yes, I have heard such arguments before of course. It’s just that they don’t resonate with me at all.

Everyone is different I guess, nothing wrong with that…

reverse komi is much better, you and the opponent can play with their normal style and there are no passive defensive moves due to the handicap stones

If you play with a large reverse komi, then you may also be tempted to play defensively. Just not dying may be enough to win the game.

I don’t want to convince you, but look at this: 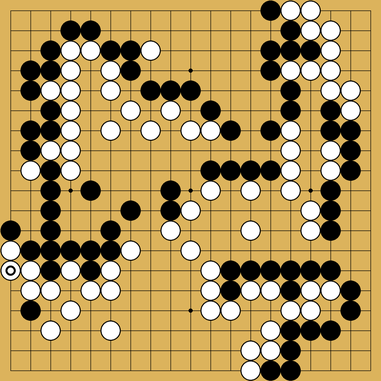 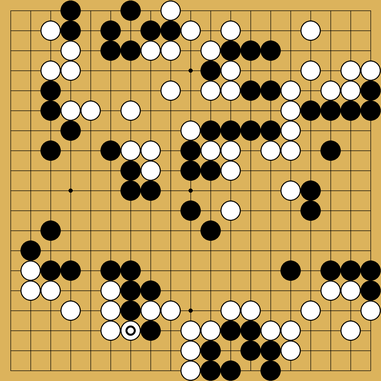 These two games I finished recently should have had 9 and (at least) 7 handicap stones. In both cases, even games, the weaker player won (and I have many similar examples)

then you may also be tempted to play defensively.

This is true, but there are no stones to help you with that or entice you to it.
For example, let’s say you play a game with an empty board and -40 komi.
An expected first 10 moves might be this where a normal opening is happening, White probably rushes to take sente and start a fight at 10 or dive at 3-3 or whatever else: 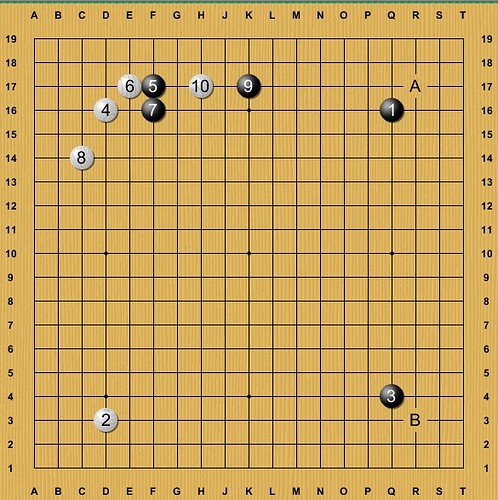 There are no “slow defensive moves” yet to be played on the board. Even if Black had opted for 3-3 openings on both corners that is also a valid tactic.

However, let’s say there are 6 stones of handicap instead and the first ten moves will probably look like this: 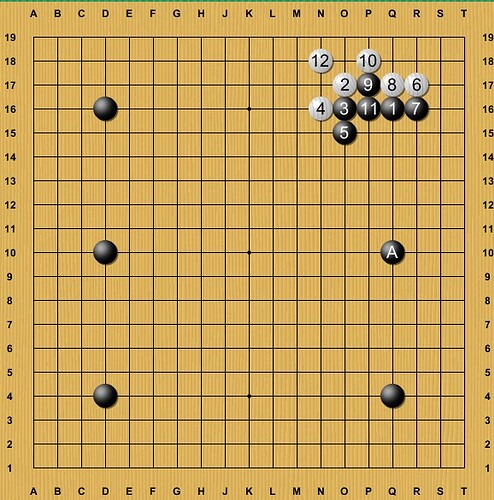 One could say that there is nothing wrong with that, but it is a joseki that you will not see in an even game where the stone at A is missing. 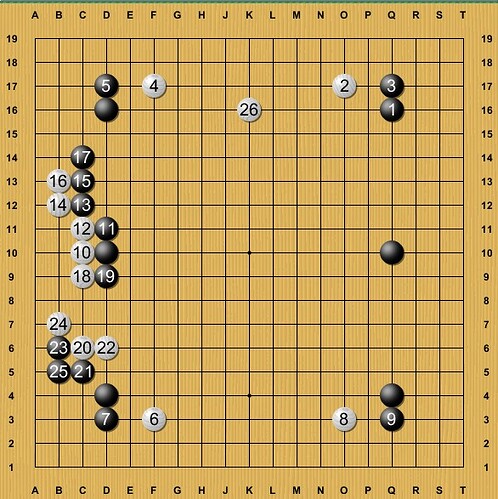 I think that could be called turtling? Obviously the example is off the top of my head, but I think we’ve all seen similar examples where the player that had the handicap stones didn’t really ever pincer or counter-attack, but played slow defensive moves that wouldn’t really pan out in an actual game even with players of their own rank.

I think that getting into the good habit of fighting evenly and having a fun and more “open” game is the greatest advantage of the reverse komi idea. Even if the player that got the extra points wants to defend, that defense will have to be build by them, from scratch, without helping stones.

Edit:
And something I forgot. I think that at the end of the day a game with a stronger opponent should be for the benefit of the weaker player. However a handicap game is actually benefiting the growth of the stronger player who has an uphill battle to climb and has to fight and wage a hit-and-run or even test sabaki.
The weaker player on the other hand learns to be huddled in and, in effect, get weaker.

At least that is how I see it. Most of my rapid growth in the game I attribute to this idea. I immediately enrolled to the DGS ladder and most of my games are crushing defeats in even games at the hands of stronger players. But I had a lot of fun and learned a lot of things that way.

just want to acknowledge this experience because it mirrors my own at a similar level and I understand it can be frustrating. generally we want to compete and have fun and that means feeling like you have an equal footing. an opponent a few ranks stronger can feel like you’re fighting uphill sometimes because your opponent is playing what feels like much sharper moves.

I suspect (although have no data to back this up) that open challenges do get more acceptance rate by equal or stronger players, and it might be natural to expect this given you assume the accepting player wants a comfortable game too. again, no data to back it up but I have my suspicions that there is some psychological phenomena like this at work

personally, I’ve resolved to embrace playing stronger players and lean into it, even though getting trounced is not always fun, you can try to learn from it

which seems less popular on this server

I understand not everyone likes handicap games but I think it’s sort of a shame that OGS culture is like this, as the handicap system is one of Go’s interesting strengths as a game.

there’s no such thing as automatic reverse komi on OGS right? does any server implement it? is there even a good method to calculate it?

there’s no such thing as automatic reverse komi on OGS right? does any server implement it? is there even a good method to calculate it?

Given that we can ask the AI how much each stone is worth, we have a good-enough way of determining how much komi one should have. In fact, it seems much easier to “tune” reverse komi to the rating system if enough people are playing!

(I don’t understand why so many people don’t like handicap.)

Because it’s the OGS default. Defaults matter, they set culture, as I keep banging on about. Make "analysis disabled" the default (poll) - COMING SOON! - #252 by Uberdude

I suspect that many strong players don’t like playing against large handicaps because the effect of the extra stones is not linear. After about 3 or 4 stones, the effect is increasingly more than the actual gap in rank. Hence a dan giving 9 stones, for example, can lose to a player 14 stones weaker. This isn’t surprising since the board space is finite.

Totally not my experience, in well-calibrated rating systems, such as EGF or KGS. I as EGF 4d would be very confident to win playing a 11k EGF on 9 stones, much more than a 1d on 3. In fact in fast games white is favoured more in both handicaps small and big. Plus pretty much the definition of go ranks is to make the handicap work out correctly. Whilst in theory there can be some non-linearity and non-transitivity, in practice it’s pretty linear (KataGo thinks so too). What I’ve noticed is it tends to be tengen that weaker players can’t use as easily as the corner/side stones, so 5 stones isn’t much harder to play against than 4 (just another stone to kill in the middle

), whereas 6 is relatively more harder than 5.

I’m curious: do you accept games with 12ks and handicap (you playing white)?