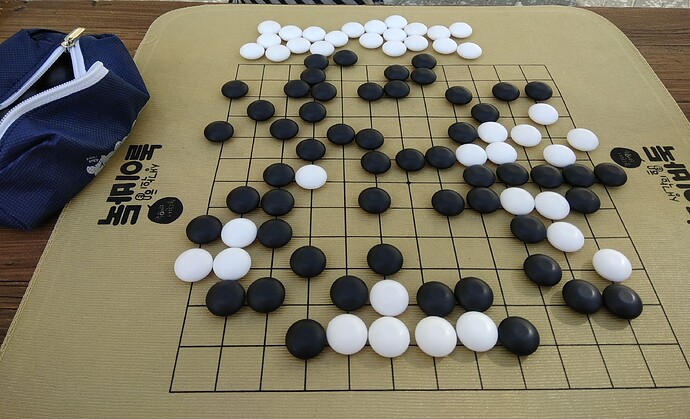 Playing against with my 4-year-old son last weekend. I gave him 16 stones handicap and didn’t try too hard.

The last time we played, a few months ago, I discouraged him by capturing too many of his stones. Btw, when Young Sun then asked me at the Go seminar if my son already plays Go, I told her about how I accidentally discouraged him and she was also like “Oh no, you must never do that! Don’t capture!”

So I’m trying to be a better teacher now.

Back to the pic i found strange to have these two big black dots symetrical near the grid of the same size of a stone, but i guess one gets used to it. Who am I to tell this after all the pics I posted with a mayhem of stones around the board 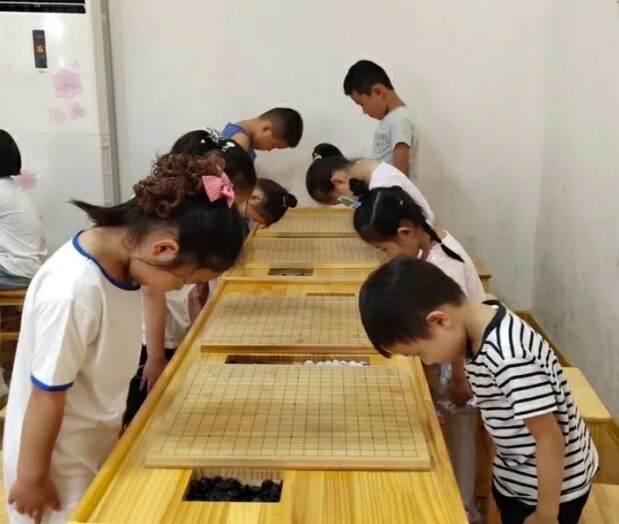 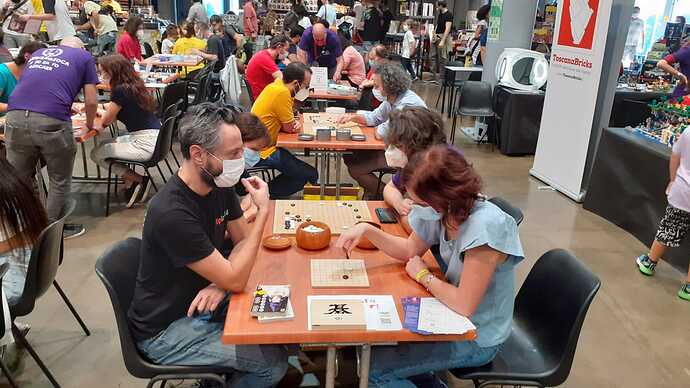 I wish I could keep a cat. So adorable. Also, I don’t nap because of catnip. 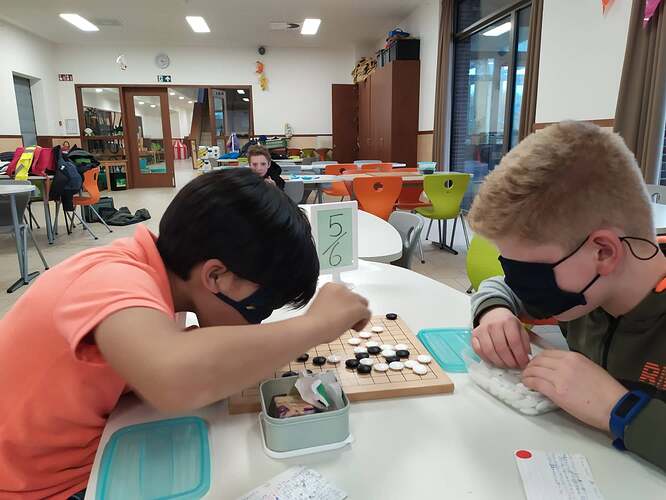 From about 5 or 6 to 11 years old, I played Chess with my father. He did not go easy on me. I won just one game against him in that entire time, can you guess which game it was? You are a wise father. If I had a father like you, I might still be playing chess more than I am. Still, go is the GOAT of board games, either way.

@KAOSkonfused is a wise mother, rather than a wise father.

You won the last and then he did quit playing go?

My apologies! KAOSkonfused! A wise PARENT!

I won the last game of chess, yes. To be fair, neither of us was very interested after that. I was more determined to prove I was capable of beating him than becoming strong as a chess player, in general. Naturally, when I found Go in the back room of my high school math teachers classroom, I was wary at first. Then my curiosity and fascination took over and the rest is history…

Images from the soft opening of the new location of the San Francisco Go Club in Japantown next to the Kabuki Hotel. I was lucky enough to be among the first to arrive, so I got to help set up and saw many of their old books equipment, photographs and art. This go club is well over 100 years old with a great deal of history to it. I expect to see this club thriving in the future and you should visit when you are in the SF Bay Area if you have the opportunity… 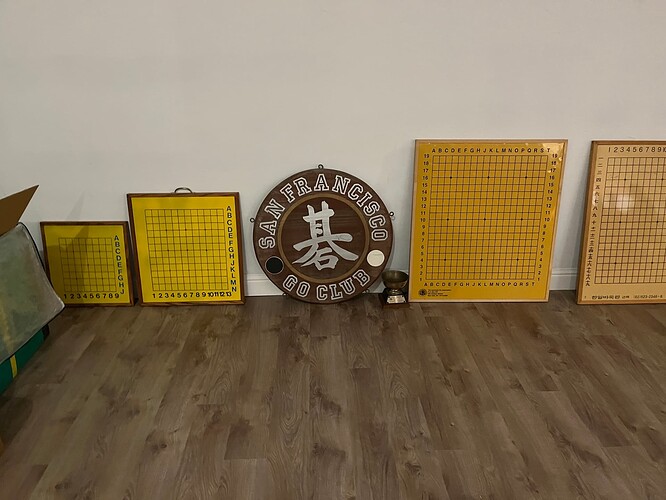 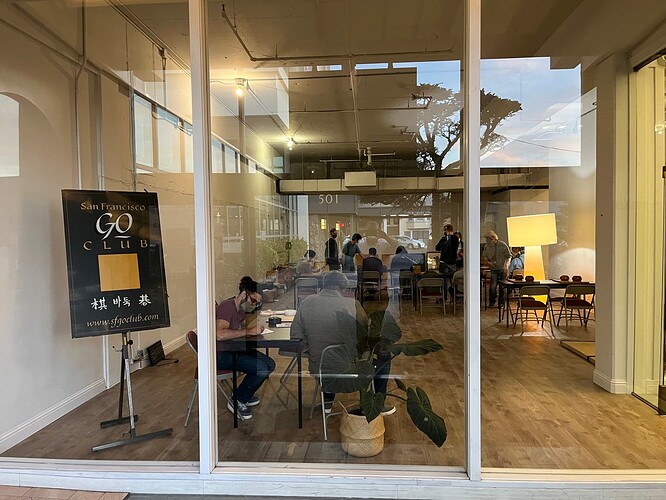 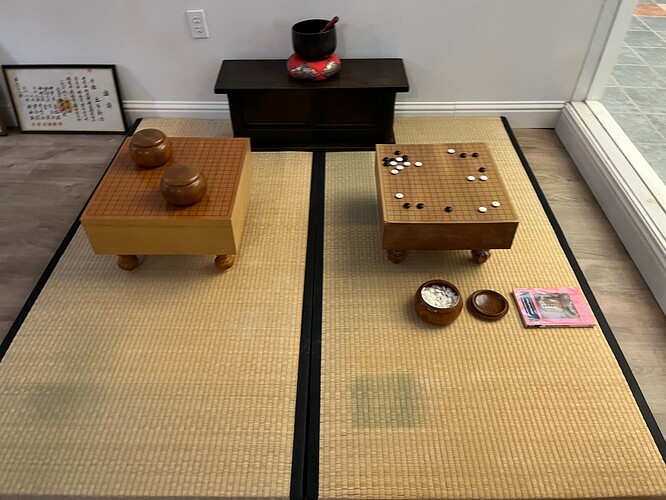 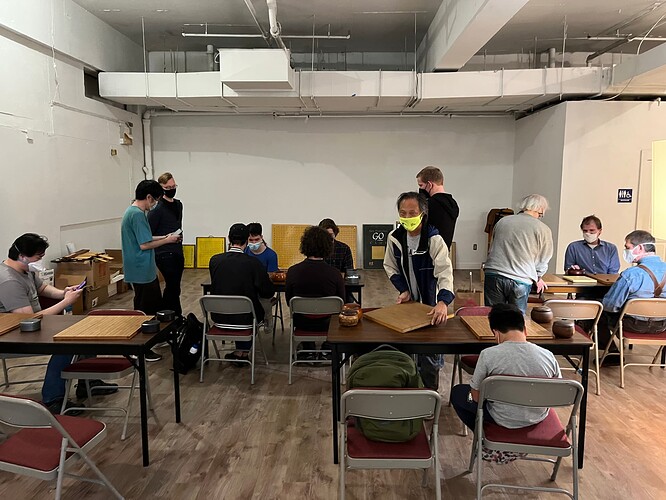 Always wanted to go to SF, I didn’t need one more reason but ok it is. Looks awesome place with good lighting.

What’s that?
That’s a tournament organized by a IRL go club. (With registration fee and prizes) regularly every month. The chinese character after each number means dan
Still curently being filled for next month. At the bottom you can see how many more are invited but still didn’t answer.
It’s on WeChat, players give their phone (yes, i know, it surprises me too) to fix meeting on some goservers or face to face . 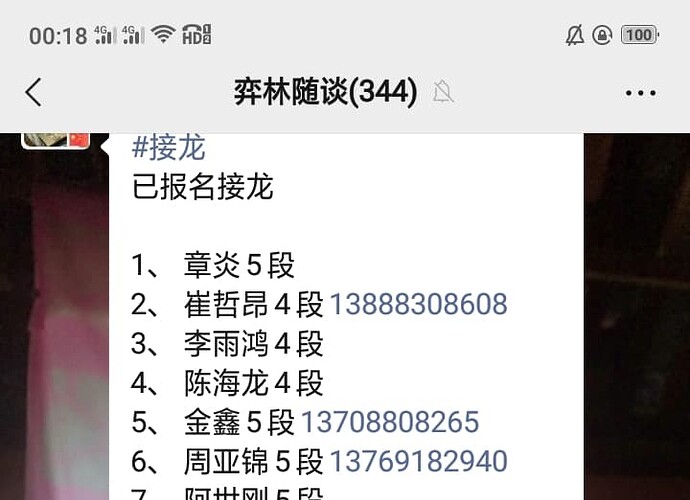 Those 2 first months were quite intense in Grenoble 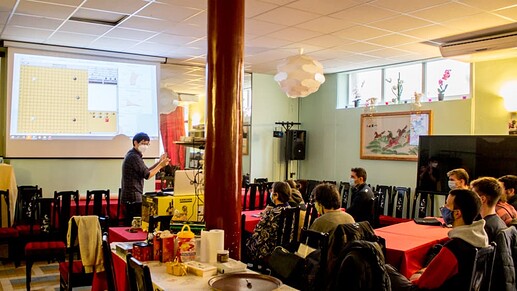 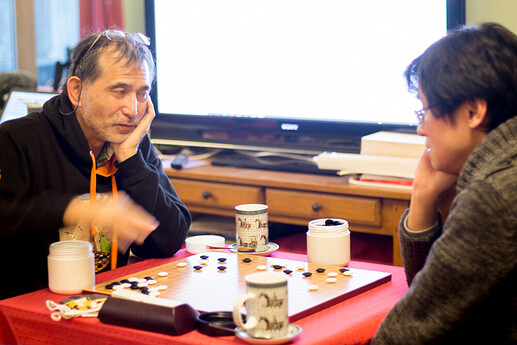 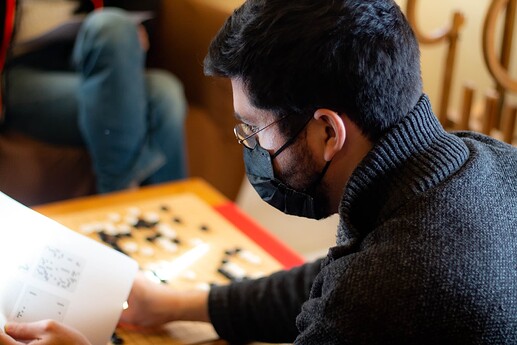 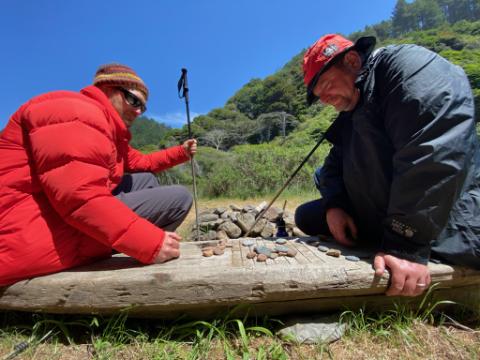 Fresno Go Club meets for the first time in 10+ years! A small, but successful event with 7 total attendees, plus two more people signed up to join us in the future, both Chinese who were familiar with the game, but had no experience. The Boba tea house, Seven Tea, had Takoyaki and other Japanese/Korean/Chinese snacks as well. The Bingo Chips worked fine, the giveaway study boards were a hit and I played my first simultaneous game, a Father/Daughter one at that! The music was a little loud, but otherwise a perfect location and a great start/restart for the club! 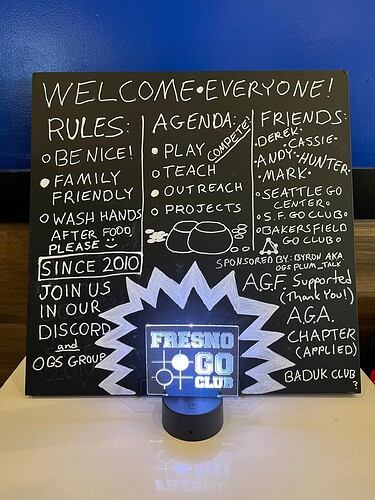 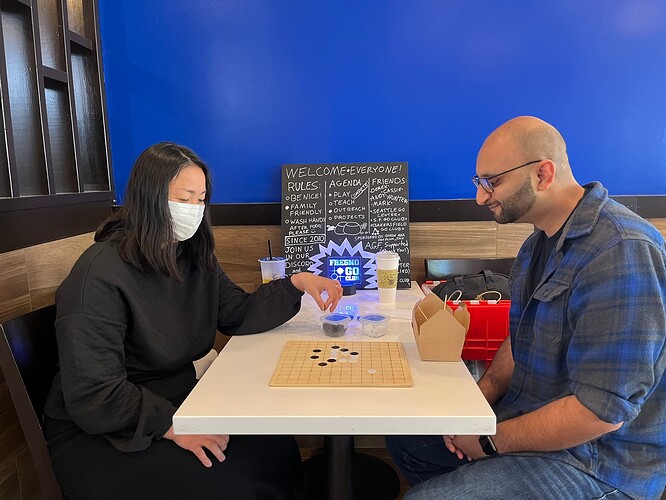 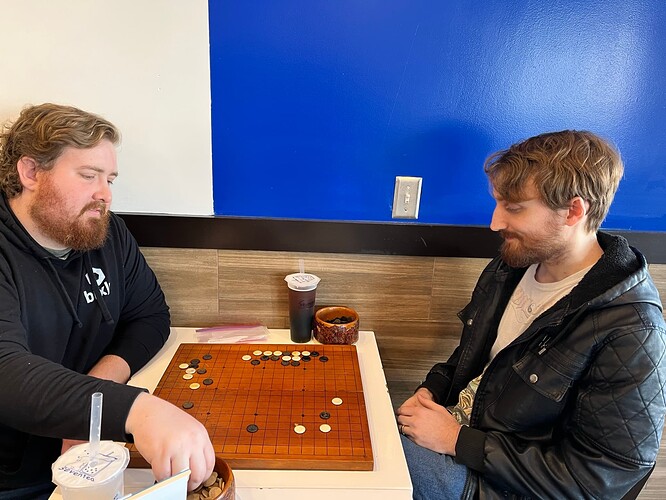 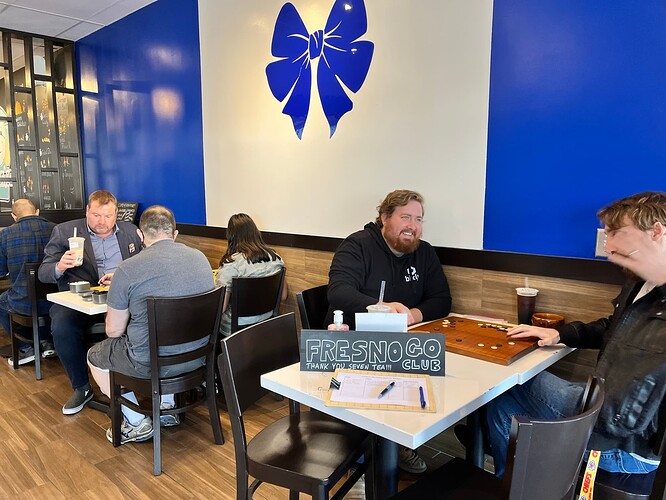 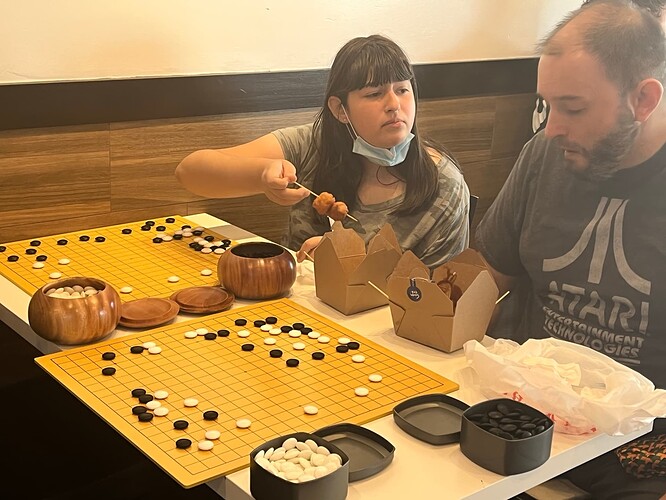 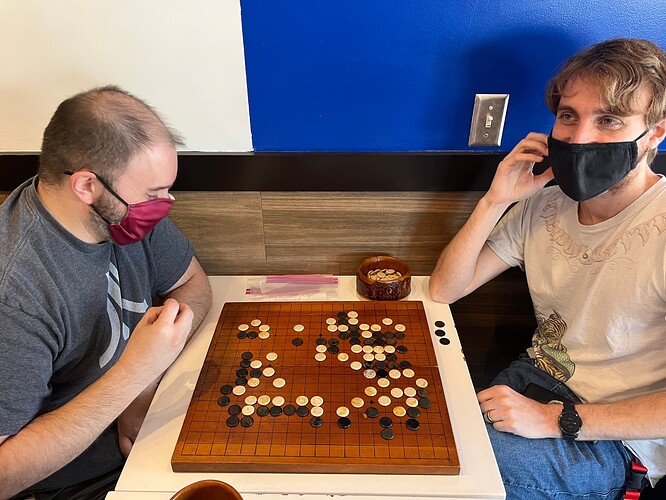 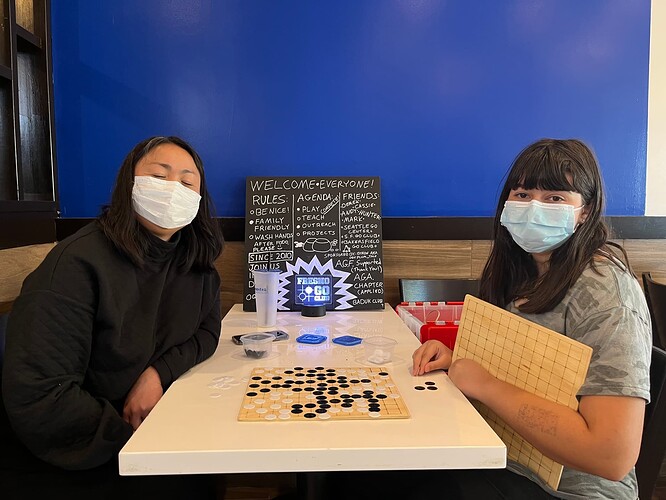 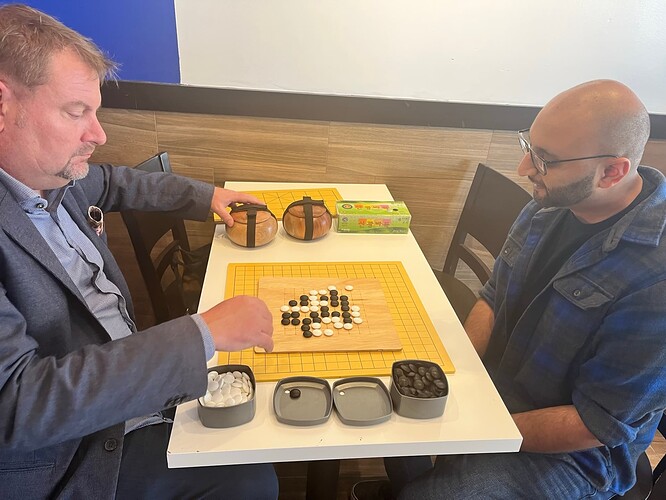 Congrats on the successful event! The location looks fantastic for a go club.

The glowing Fresno Go Club sign sets a new standard! I’ve only twice been into a Go club irl, just before Covid madness. They did not have that level of bling.

Go deserves an audience. I will deliver.

On a serious note, this sign was created with the help of Root Access Hackerspace in Fresno, using our laser engraver/cutter. The same tool that is responsible for the training boards. Thank you Derek Payton! (Message for someone who will read this in a year or two after learning to play…)