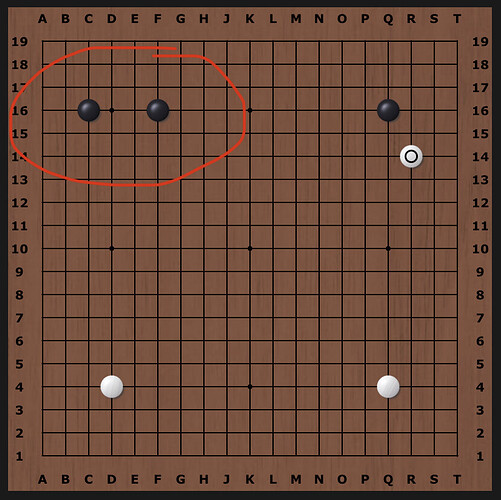 So since I’ve moved up a rank or two I’ve seen this opening a lot and I have no idea how to handle it! Any advise? It seems too big to ignore but anything I’ve tried seems to fail

Edit: but usually later in the game!

So you just ignore it for a while and play elsewhere like I did? I’ll try the moves you suggested, thanks!

I wish I knew as well. There is only a brief Sensei’s Library article about it.

That’s opposite advice than mine.

My advice meaning: you’re late to approach, so don’t. Play safe from a distance and avoid your opponent to have a framework to build territory.

Your advice sounds like: attach and fight. Something will happen.

But I fear that at this moment it’s too early to attach and fight. Opponent could use his strength to build on top of your attaching stone

I haven’t read it out but what about h17? If they pincer, enter the corner. If they defend the corner, you get the top.

just ignore it for a while

Nope!
Something around D10 is important.
If you take it you deny black’s moyo on the left and place a stone that could work with your lower corner.

Black D10 would be far worse to manage

You’re right! My un-edited advice is not good from a whole-board perspective.

That said, this enclosure is relatively loose compared to the knights move, so shouldn’t OP take advantage of the weakness eventually?

On a related note, I did wonder about direction of play in this opening. There is the direction shown for black in the original picture, but what about the enclosure pointing in the other direction, i.e. d17, d14? Is that a valid alternative or bad direction?

Don’t forget to check out our joseki explorer. It has some excellent lines.

By using Move 5 to secure their own corner, Black is trying to get some “cash in the bank” - i.e. quickly secure one large corner that will be difficult for you to invade. Since they also have the Q16 stone on the right, they are probably aiming at creating a large extension across the top.

As such, approaching from the outside at R14 is kind of risky because if they respond with The Kick joseki - they could secure the top with only a few moves (Black R15, White Q14, then Black O16 to settle). Your better options may be

I feel like this 19X19 FOR BEGINNERS article may help you make sense of the opening dynamics: PLAYING A BALANCED OPENING

…I’ve seen this opening a lot and I have no idea how to handle it! Any advise? It seems too big to ignore but anything I’ve tried seems to fail

Against that black corner formation, many moves that may come to mind for white are bad/aji-keshi (C15, D15, E15, G17). Approaching at H17 is just about the only local move that is good/playable in the (early) opening.

But black does not have a really great follow-up from his corner formation either. So white can just continue taking good opening points for himself.
For example, I like move 6 at C6 to reduce the potential for black on the left side (while building up the lower left for white).

According to http://ps.waltheri.net/, this fuseki is relatively uncommon in professional games and the two most common pro replies are white 6 at C6 (bravo @gennan) or 3-3 invasion (r17).

Incidentally, the fuseki with the enclosure pointing towards the other black stone is equally as (un)common in pro games (according to Waltheri)

Yes, this black opening was an AlphaGo Master invention shown to humans around new year 2016/2017, so that’s why you’ll find (almost?) no pro games with this opening before that time.

Oh yeah, LOL, all of the pro games with it are since then. I wonder how common it is now…

The answer is, pretty common

This Nick Sibicky video is not about that precise board situation (it’s more about the enclosures themselves), but it does talk quite a bit about that large corner formation from about 1:40 or so.