Please, can anyone help-me with this 4k game review?

Hello,
Anyone can help-me with a review about this game?

Here’s a quick review with some comments up until move 100 or so.

This moment came around move 50 where your opponent started to press you down and all your groups where already on the 3rd line and about to be surrounded. So my main advise is simple: don’t get surrounded!

I agree with everything ZenModeOn said. Here are some of my thoughts(I put some variations in the game chat):

@ZenModeOn, @drifterwolf , thank you very much!
Please, can you see this game for me please?
I played against 1dan, trying playing influence-oriented, and surround the opponent. (To learn how them react)
But I didn’t know how to deal with the move 66.

Tough game, and a little over my level but here’s a review with some comments until move 100 or so:

I think the invasion at 66 was handled well but there was too much aji for white to exploit. I would have consider sacrificing something (perhaps the 4 stones on the top-right) in order to preserve sente and get some points elsewhere. 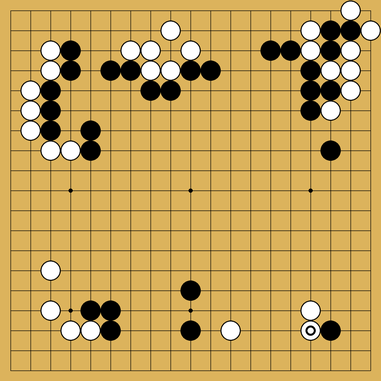 My observation is you play too many slow moves not matching your rank, showing too much respect, in the wrong way, to the 1d. When we play scared to opponent 4-5 ranks higher, we lose that minimum chance to win and more importantly to make the game as a meaningful learning opportunity.

Besides, dude, don’t play too many games against d players. It’s too stressfully.

I put some variations in the game chat.g