Please, If possible, I would like a DAN review about this very strange game. I need improve my direction of play and concepts of the game

Hello,
The opponent started the game attaching in my Hoshi stone, then, I extended it by all the side, pushing from ahead. I was very happy in the beginning, making territory on the 4th line, pushing ahead.
I was thinking that was impossible to lose. But I lost haha. 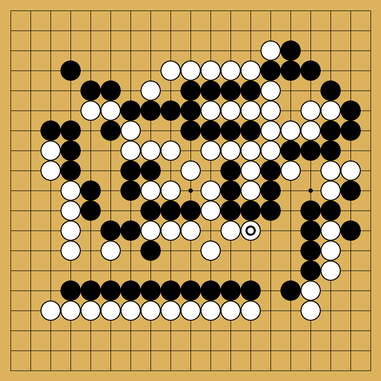 Please, I would like to understand my main mistakes, that make I lost for a opponent that give me free 4th line territory at the beginning.

A good week for all!

My advice to black for the first 30 or so moves would be that the following is a losing position for black (by 21.5 points, and switching the colours would still be a win for the outside with 8.5 points since not even komi can save this) 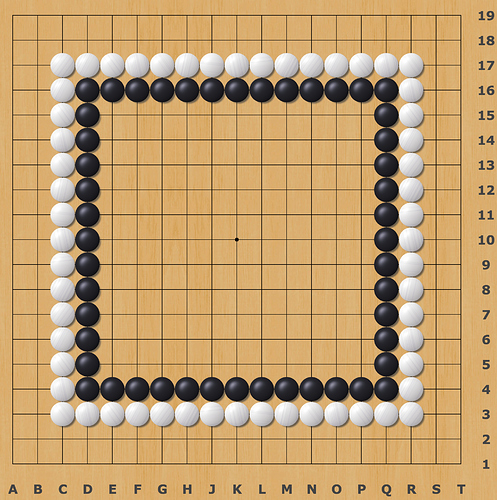 Not even mentioning 4th line territory…

For white the advice would therefore be that invasions aren’t even necessary at all after that opening. Just play it safe and you would win.

Not to mention you had a massive opening to reduce from, and (probably) could have saved the group if you just used a few forcing moves.

If you played this game in the same room as me I would find the nearest newspaper and whack you over the head with it. (Kidding, of course.) Let’s forget about Black’s unusual strategy for a moment. White’s stone development was just passive. It is nobi all over the place. Nobi after attachment. Nobi when pushed from behind. Even nobi when pushed from behind on the PREVIOUS move. You may have heard that the reason pushing from behind can be bad is that White can get ahead of Black. But if White never chooses to get ahead by bending or jumping, there is no drawback. Make certain you are tailoring your response to the situation. Do not be hasty either.

There were a couple of thank-you moves towards the end that did not affect the result. But you should be aware of them and avoid them in the future. 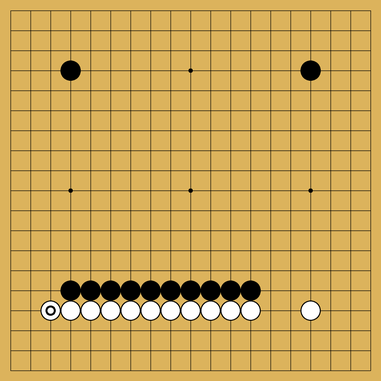 The main thing is to ALWAYS consolidate all edge territory before starting a complicated fight in the middle.

You tried to jump in to black’s upper right corner with S11 (move 62) and got caught when your R14 (large knight’s extension) got pincered.

It might have been much more profitable to finish consolidating your upper edge territory as far as you could to black’s D16 stone, and then curl into the middle more securely from your foot in the door at H15.