I think the three points in the lower left corner should clearly count for black as territory. Instead, they are counted as neutral points. Or am I mistaken?

If I am not mistaken, then this would be a bug in the scoring algorithm. Would the support forum here be the right place to report this bug?

Not sure if it is relevant, but the three black stones above the three points in question had been marked as dead at the beginning of the “mark/accept captured stones” phase. I changed their status, my opponent accepted that, but the status of the three points of territory below them did not change accordingly.

it’s possible that the algorithm counted them wrong as some strange seki, or your opponent clicked them (perhaps unintentionally) to mark them as dame. Either way, on stone removal, you can click them to return them to black. The algorithm isn’t perfect, but it tries. =]

Mh… after shift-clicking all three intersections there I get this, which looks quite good to me: 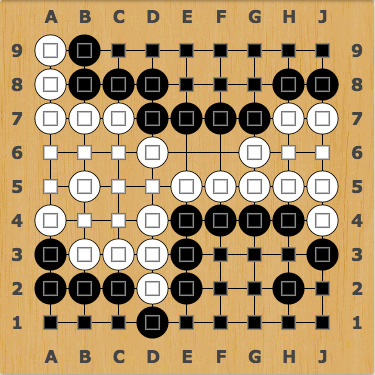 I guess the SE may have some problems with “hanging” connections.

The scoring algorithm is flawed, you should always check its estimation before accepting the score. You can override its estimation by (shift)clicking on the points to change their status. 
In “estimate score”, stones around K13
When I succesfully count them as white, something else on the board changing incorrectly. Even with shift clicking.
trohde August 3, 2016, 1:20pm #6

@50_kyu, did you notice that the territories are not closed yet? H1 is the open door …

All in all, as far as I know, “score” is not trivial to estimate

The scoring system works great the main problem is that people don’t know how to count at the end of the game to see who won.

A post was split to a new topic: Lost by resignnation but I didn’t click on the button

Thanks for all the replies. I did not realize you could also click on empty points during scoring. I was under the impression that you are supposed to click on groups of stones and the algorithm handles the rest. Thank you @trohde for pointing out my mistake.