Would anyone like to guess professional moves with me?

This is Yamashita Keigo’s recent close win over Shida Tatsuya in the Kisei A League. 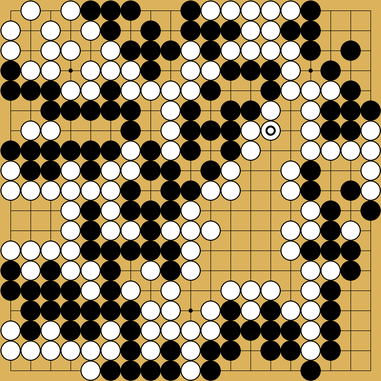 What is the procedure ? Guess move n, click once to check, guess move n+1, etc ?

So after the first try you have seen all moves?

It is a reasonably fun game. SmartGo had it as a feature, and hopefully will again soon.

I’ll give it a shot.

My first guess is what move 20 is, as I presume that’s what you meant, and then 220 is the last move I’ve guessed.

I would like to find a way to make this easier though, because it’s not that fun to count up the scores. There’s no way I want count whether I got it in my first five tries, because it’s (a) too much hassle and (b) sometimes I just gave up and move onto the next guess, and those would be indistinguishable if I didn’t guess 5 times but say guess 3 times etc.

That’s the way I interpreted it anyway.

I also think I have a bit of javascript code that I can probably use to count the score, at least for the case when there’s no branches = 1 point. It should make counting the score a bit less painful if people did want to try it in a review of the game.

It seems a bit tedious to have to try each of 180 (181? probably) moves 5 times in order to get half a point, and if you don’t do that for every move, I can’t see a way of automatically counting the half points.

Ironically, even though I started the thread today, it’s been a busy day and I haven’t yet had time to play…

Even guessing once per move probably takes a decent bit of time.

I agree, this is better than five times.

Starting now. Having to give myself zero for the first two moves, since I accidentally looked at them.

Guessing more than once is too tedious for me.

Yeah I’m not sure I’d do it consistently for every move, sometimes I’d just do it because I’m curious if it was A or B or C etc

Done. I did try three on every move.

The guessing of the timing of the yose moves was pretty much chance.

I made a few stupid guesses – I reckon I could’ve hit a hundred points without them.