would it be possible to add a flag to show which puzzles a user would like to make as complete?

Comments on puzzles would be nice too.

At the moment the only feedback we get on puzzles is user ratings. Some of my puzzles have low ratings, but I have no idea if that’s because they are broken, or if people don’t like them, or people are just vindictively downvoting problems they got wrong.

Hi, other ideas I had while playing around the puzzles:

what do you think?

Puzzle rating on list page is equal to first puzzle rating? or average? I think that is a bit annoying to rate every puzzle because when I follow a serie, I focus on resolution and rate when all puzzle is done.

What do you think about?

@Mr_Caillou The rating on the front page is the average of all the rated puzzles in that collection. In hindsight rating the collection as a whole might have been better, it was kind of an evolved solution… We might still go back and add that in as an option. I do like being able to discover particularly good puzzles within all collections though, that should prove to be useful as that system grows.

@sphaso We’ll likely get an SGF importer going. Re the undo thing, I was debating about that myself… I can see the point of undo going back two spaces to your last move, but that removes the possibility for folks to go back and explore another variation that the author might have missed. Maybe that can be better solved with some other control, we’ll have to think about that some more.

The key binding, ‘next’ are you referring to skip the current puzzle and go to the next board, or arrow keys to go back and forth along the solution?

Thanks for all the hard work anoek.

The puzzle feature is giving me a lot of fun lately.

A suggestion on the collections: How about making them visible like the “observe games” page. I’ll add a screenshot about the idea. It would look really cool, and people can easily pick the ones they like. 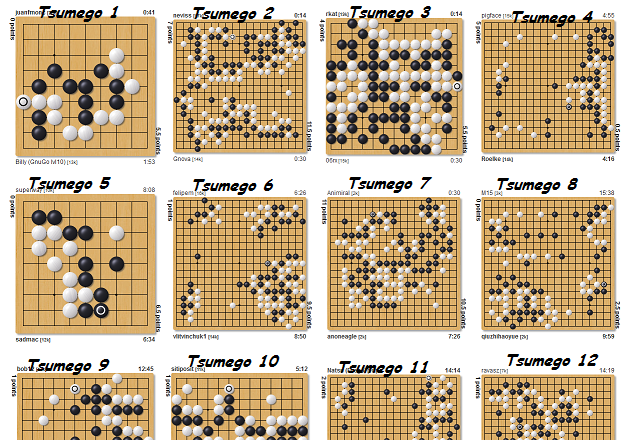 @sphaso No offense intended, but you should probably try to improve your focus if simply moving your pointer around breaks it. Go is a game that requires focus despite real world pressures; it’s important to develop mental fortitude.

Oh I dunno, I hate moving the mouse around myself

that’s just a general thing though… Key bindings are pretty easy in this context, I’ll add it in, and probably ‘escape’ to reset or something

I do not think it is a must or a need I just think it would be interesting when all of the most important things are added! I like collecting that kind of data ^^! so it is just a personal want : 3!

I think that’s already on in the makings, Mikasa.

! now I can be even happier when making go problems -!

Puzzle stats, and I think I’ll be adding a subscribe-to-collection kind of system so folks can know when ya’ll add new puzzles to a collection… soon soon, hopefully all of that this week

This is now in place, as is hitting escape to reset a puzzle at any point

None taken. Any advice?

I have few things to say about the puzzle/Tsumego feature. Sorry for dumping it on this thread

I have tsumego experience from Books, Gobase, gochild, ootakamoku, GoProblems.com, 101weiqi, countless android programs and maybe somethings that I have forgot.

For starters calling it “puzzle” instead of “problem” or “tsumego” is pretty unconventional. I have no deeper thoughts of this though. Someone who natively speaks English and is a beginner go player might feel what the proper word would be.

There are many features that make tsumego collections enjoyable to solve. I will try to list them here.

I am surely forgetting something.

Mainly I think it’s important to try to “rank” the problems somehow. This might allow one to solve consistently difficult problems. Time taken to solve the problem should also be a factor in the ranking. It seems to be pretty hard problem to have good ranking algorithm for go problems.

GoChild has magnificent tagging feature. One can tag problems with their own tags and make new collections from the tags. This is huge as people can build perfect collections without having to enter the problems manually (as they are already entered by someone else but in a mixed bags)

I feel it’s very important to be able to skip a problem that is too hard for my current level. Also I feel that at least 10% of the problems one is solving should actually be fake problems with no correct answer (if they ask for black to kill then there would be no way to do that) So actually the user interface should have a button for EVERY problem that would act as “Nothing to be done” or something similar. So people could get the fake problems correct also.

Currently the “star rating” of a problem is nice but it’s missing a way to report wrong problems or missing variations. This is pretty difficult user interface problem. Maybe each problem could have a unique forum thread that is created when someone adds a comment to a problem.

I will probably figure something else to say about tsumego stuff later on. This post got a bit long already.