Quadruple ko; should have been a draw

I recently finished a game that should have been a draw, I think. It was a game-deciding quadruple ko, and we scored it like a seki, but I don’t think that’s right. 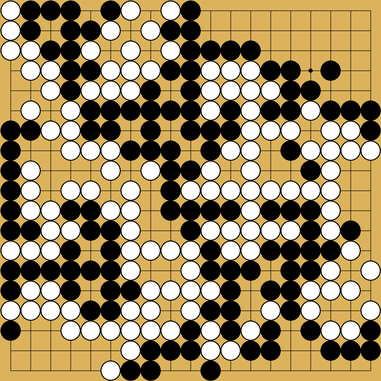 For future reference, is there a way to draw? Is there a super ko rule in place (I’m not sure if we played through the quadruple ko long enough to see)?

The rules you played were the japanese one. So there is no super ko rule.
And I’m not aware of any mechanism which allows you to end a game undecided (except for abandoning), which you should be able to agree on in this case.

Amazing ko! I think that should be seki. There is no bigger ko on the board, so no one would play anything but one of 4 kos between top left groups. Maybe I am wrong, however…

If you need to force a draw you can contact a moderator. We are purple in chat.

Imo, i don’t see why white just don’t fill f17 at he position the game’s at… that kills the group to the left, and i cannot see how black could prevent it… maybe play out some other moves first to remove possible ko-threats…

Yes, you are right!

That only works because of 307 at p7, which came after we realized that the game was over because of the ko.

Technically it should have ended in “no result”.

A “draw” would be a result of “jigo” (equal points after scoring), which isn’t the case here because quadruple ko prevents scoring from taking place to begin with.