The question is whether White must play at M8 before the Black stones at T9 may be counted dead. The game is scored according to Japanese Rules. 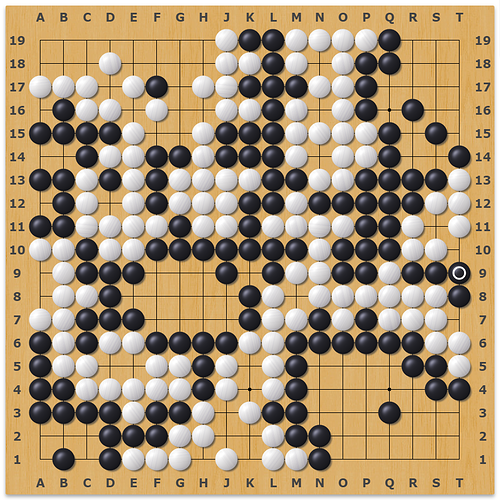 Please help me settle this question.

No need to capture. For example a single (dead) stone in opponent territory has 4 liberties and one could argue that all those four liberties should be filled too. The amount of liberties makes no difference if a stone is dead.

AFAIK there is no need to fill m8. The stones can no doubt be captured, the number of moves needed is irrelevant. If black argued for seki, the problem would be played out on a separate board, the status of black determined as dead, and then scored as such from the original position…

And I think, that they have to. One of the MAIN rules said that stones is captured when they surrounded, so if White can’t surround stone - it’s alive. If they just won’t move T10 and T7 because they think that that stones captured - I think it’s wrong.

It would only be an issue if there was something black could do to gain points. But no matter what black does, the score doesn’t change. A player is never required to fill in their own territory, it is up to the other player to force them to do so.

And if the game ends with black unable to make life, that area is simply a big white eye.

Does it matter to the final result what the outcome is?

The commentary to Article 7 seems to confirm a “proof” should be acceptable.

Life-and-Death Example 7-2: …Here is how Black can demonstrate capture of the seven white stones on the right, during the confirmation phase…

White can do it without sacrificing any points to kill the stones. W’s move’s are to pass or fill dame unless B plays T10 which is absurd without a Ko fight. So B’s choices are to fill dame, play in his own territory which eventually costs B more than it does for W to actually capture the B stones or throw into W’s territory which gives free points to W or is a wash (assuming W doesn’t blunder or there was a legitimate unplayed invasion which again is not this scenario). At some point B has no legal move left but to pass. Therefore the game must come to an end without disadvantaging W and with a definitive result for that position. Then it’s on to Art.10-14. By then, it has probably devolved into something a lot more satisfying such as http://www.pandanet.co.jp/English/art/altercation.html

The stones are dead, but M8 is not territory. I saw something similar to this recently, where a small group was not connected to the main group, The opponent could have forced the connection (hence taking away a point) by taking away a couple extra liberties, but didn’t see it. The auto-scoring did not count the connection point (correctly, I believe), but the player countermanded it and his opponent accepted the change.

@Conrad_Melville: I do not understand this thinking. All dame in the area are filled, black has no outside moves to play, much less ones that force W to do anything. B’s only moves that effect the situation are to play inside at T7 or T10 and if he does, W captures and that’s the end of that. The net change is zero.

why should white have to play q14 to call these stones dead any more than he has to play s19 or t19? not following how this is even a question, really.

Here, white is dead and black would have to fill 12 liberties to remove the stones from the board. Black can’t be killed 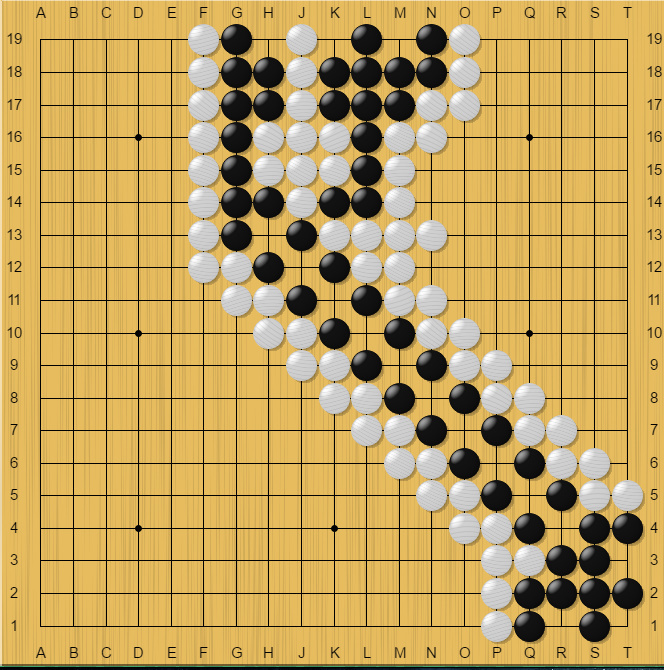 Here, white is dead and black would have to fill 12 liberties to remove the stones from the board. Black can’t be killed.

The group is seki until M8 is filled. M8 is a false eye, which makes it different from the cases where, say, a random stone is surrounded by territory controlled by the opponent.

I meant to add, this discussion is convincing me that Chinese rules are better (though I really hate them for counting in the end).

I think under AGA rules if one side wants other to prove the group is dead. They have to give up prisoner for every passed move. Seems very reasonable to me. isn’t there somethign simialr under japanese to assure fairness?

I didn’t understand it as seki so I omitted Other empty points are called “dame.” Stones which are alive but possess dame are said to be in “seki.”

In normal circumstances, M8 is territory, not dame. White is not required to fill it. Black stones are dead.

(If anyone is interested and nuts, I recommend reading Jasiek’s commentary to Japanese 1989 rules which are… sub-optimal in terms of definitions and implications.)

However, as far as my interpretative skills go, under 1989 Japanese Rules White’s dragon (E1—T5) as it stands is in seki and therefore, there are no points for White (because of how seki and dame is defined, for example see Commentary on Article 8, diagram 15 in the original link). In this case, White needs to proceed and capture Black stones by playing M8, T7, T10. Black can concede and confirm that the Black stones are dead during confirmation phase, but it is a loss for Black.

The rule also says that once there is disagreement in the settlement which are dead, the play can go on, but not allowed to pass. Must put a stone down - so that it either becomes prisoner or reduces the space count. (after dames are filled) - so the dispute will eventually resolve showing that those black stones become dead with White filling M8 without loss of count.

Japanese rules are the best rules to use if you enjoy arguing about rules.