I think I’ve reached the point I should really start studying them, so…

EDIT: not based on my own idea, but I see in many places recommended that new players need to study them asap and memorizing them is key etc.

Joseki is “tied” to a specific place on the board? I mean, a certain one was “designed” for upper left corner, for example, or it can be applied in every part of the board where a similar shape emerges? I’d guess middle of the board is too open to possibilities for this to work, but I just might be missing the point entirely.

Can someone please explain to this 5-year-old?

Joseki are not tied to a specific corner of the board. Since the board is symmetric, the same joseki apply to all of the corners. However, whether a particular joseki is a good idea in a particular corner of an ongoing game will depend on the situational context of what’s going on in the rest of the board.

Also, joseki cannot be shifted. Even moving the pattern 1 line away from or toward the edge of the board would most likely profoundly alter the soundness of the moves. The exact positioning of the stones relative to the edges/corner is important since it determines how much eye space would be available, whether stones may be captured, whether inside plays are feasible, etc.

As 22k? Probably not. There are probably more urgent skills to improve first. I would recommend you first get a review for one of your games, to find your biggest deficits. They are often not where you think they are.

Don’t get me wrong please: Studying joseki is not only remembering the sequence, but understanding why it’s crucial to play exactly at a specific spot. Your question indicates (for me), that you still lack some skills needed to understand the joseki moves.

I’m actually 23k if you ask me, maybe even 24k. Amy crushed and I got a win out of nothing, which gives me a slightly better rank.

As an (addmittedly over-rated) 5k I can second that. I haven’t spent much time on Joseki study yet and don’t plan to change that unless I reach 1 Dan at some point.

There are probably more urgent skills to improve first

All of them, again if you ask me.

I get your point, don’t get me wrong, just joking.

You explained it very well, thank you!

Studying joseki and getting better reading is like chicken and eggs. You should start memorizing and playing certain basic josekis asap. The more you play them, the more you will understand each move, the weaknesses and the strengths of the shapes and you will be able to apply them in similar situations, not just corners and sides where josekis tend to occur. To search for/learn about josekis http://www.josekipedia.com/ - to see how they are used in games: http://ps.waltheri.net/

On waltheri, click “around stones” on top right and play the joseki you learned from josekipedia on the board. Waltheri will give you pro games in which that joseki was played. Click those games and replay them fast, to get a sense of the corner/side development or board development in general. You can check out if josekis are corner specific or not, by browsing games like that.

Ok, let me try this again.

So, in my humble opinion. If you’re just starting out (as a 20-25kyu) you don’t need to do a deep dive into joseki. Just learn 2-3 of the most basic ones so that you’re not flopping around during the opening game. When I was just starting to learn, I used to make A LOT of mistakes during the opening because I didn’t understand what was going on or the priorities for each move. I was making middle-game moves in the opening, and would frequently get myself into trouble.

Here’s a copy/paste of an older post where I use one of the more basic joseki sequences to explain the importance of “settling one’s stones”. Hopefully, this will help you understand why every move in a joseki sequence makes sense.

So let’s start with one of the classic opening sequences: 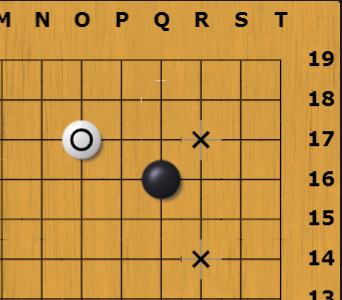 So, black had a stone at Q16, and then white approaches the corner at O17. White is implicitly attacking black - meaning - if black doesn’t DO SOMETHING, then white will play at R17 or R14 and have a good chance of taking over that corner. 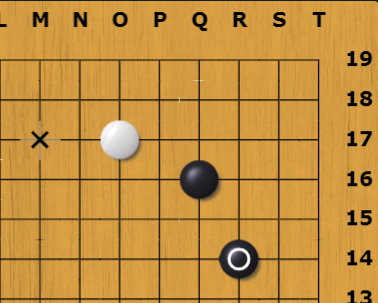 So, black plays calmly at R14. Even if white can do something on the top, black can still get the right side of that corner, and maybe part of the top edge. But now, white is outnumbered! If black plays at M17, white will be in trouble, so now white has two choices. White can restore the balance and play a defensive move like this: 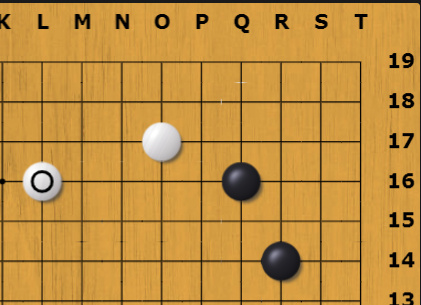 Black’s two stones are matched by white’s two stones, the battle for the corner is far from over, but this small exchange is done for now - the stones are “settled”. Now - what if instead of falling back, white decides that the best defense is a good offense, and tries to grab more of the corner like this: 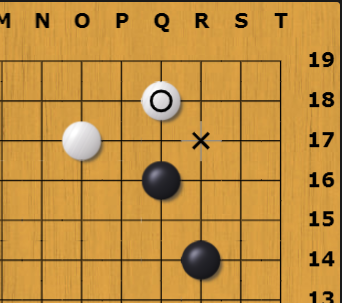 Since corner and edge real estate is the most valuable/efficient territory in the game, black wants to guard their part of the corner as much as possible. Now that white has counter-attacked, black must do something or white will play at R17 and grab the whole corner. 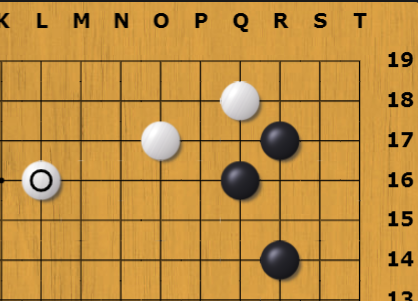 Black blocks at R17 - which now leaves white out-numbered 3 to 2. So, in order to keep black from surrounding it, white plays at L16 and settles the stones. Even though it went on a little longer, this little sword-fight is now over, and black ended up with the “initiative” to make whatever next attacking move is to be made in the game. So - let’s do some

If you go to the main OGS site, you can click the Joseki link at the top, and work through these patterns for yourself.

Here’s one for the joseki I just discussed:

So study in the sense of understand the moves - no because it’d be difficult without knowing tesuji and ko fighting capturing races seki etc.

But to be fair at what point did someone show you (anyone reading this thread I mean) the simple 3-3 invasion joseki? The one ai’s don’t like anymore with the tigers mouth at the end.

18k-13k not sure about the exact rank. I looked it up since I had problems handling the dump 3-3 invasions. Now at 10k I know enough to use it correct. (EDIT: better)

And yes, the 3-3 is one of the few beginner friendly joseki.

Thanks, it helps to have a roadmap of what I should be taking away when studying something new.

That 3-3 invasion thing can get REALLY complicated - see this earlier post:

And then AI had to go and make it complicated. Now - just look at this mess! I mean - I get it - the purpose of these more complicated joseki is to introduce more un-settled groups early in the game. But yeah, for a struggling DDK like me, it’s a definite stumbling block / You Must Be This Tall To Ride This Ride kinda thing…

She’s very likeable and not boring to watch, unlike other YT pros I’ve tried watching.

I do that shape all the time LOL.

The question about when (at which rank) it is appropriate to learn joseki also came up recently in another thread.

In regards to this question, I would like to offer this excerpt from Immanuel deVillers’ book 81 Little Lions:

“But learning joseki is bad! Do not do it until you are <insert random rank here>.”

That is one of the standard sentences that any Go player has heard at least once in his lifetime. Some players preach it like a mantra, some will throw it at your face without even understanding what it means. If you ask any of them why they speak that sentence, most will tell you that they heard it from someone else—or go with “I do not want to play moves that I do not understand.” But I feel that this common approach is wrong.

There is a consensus that memorizing joseki is wrong if you do not understand the reason behind it. However, joseki moves are also considered the best in certain localized situations. Most of us are amateur players, and of course we will not understand everything about a joseki, but by totally neglecting them until we hit a predefined rank we are only hindering ourselves.

When I was a beginner (~19k), I was often obliterated in the corner on a 19x19 board. A 3-3 corner invasion would totally kill my stones. One player then recommended me to study and learn the corresponding joseki, which I did for a week. Obviously, I could not understand those moves at my rank back then, but afterward, knowing the best moves and having spent time with them, I was never tricked again when playing people of my own rank—and I climbed a few ranks quickly.

So, instead of completely ignoring joseki and then telling other people what to do, try a different approach:

Note: the above excerpt is from a book that is copyright by Immanuel deVillers and released under a Creative Commons License: CC BY-NC-ND 4.0.

The only thing you really need to know about the 3-3 invasion is - if someone invades what you thought was YOUR corner, do not try to kill them outright. You will fail and just get yourself into more trouble.

Instead just do one of these and you’ll be fine: