That 3-3 invasion thing can get REALLY complicated - see this earlier post:

And then AI had to go and make it complicated. Now - just look at this mess! I mean - I get it - the purpose of these more complicated joseki is to introduce more un-settled groups early in the game. But yeah, for a struggling DDK like me, it’s a definite stumbling block / You Must Be This Tall To Ride This Ride kinda thing…

She’s very likeable and not boring to watch, unlike other YT pros I’ve tried watching.

I do that shape all the time LOL.

The question about when (at which rank) it is appropriate to learn joseki also came up recently in another thread.

In regards to this question, I would like to offer this excerpt from Immanuel deVillers’ book 81 Little Lions:

“But learning joseki is bad! Do not do it until you are <insert random rank here>.”

That is one of the standard sentences that any Go player has heard at least once in his lifetime. Some players preach it like a mantra, some will throw it at your face without even understanding what it means. If you ask any of them why they speak that sentence, most will tell you that they heard it from someone else—or go with “I do not want to play moves that I do not understand.” But I feel that this common approach is wrong.

There is a consensus that memorizing joseki is wrong if you do not understand the reason behind it. However, joseki moves are also considered the best in certain localized situations. Most of us are amateur players, and of course we will not understand everything about a joseki, but by totally neglecting them until we hit a predefined rank we are only hindering ourselves.

When I was a beginner (~19k), I was often obliterated in the corner on a 19x19 board. A 3-3 corner invasion would totally kill my stones. One player then recommended me to study and learn the corresponding joseki, which I did for a week. Obviously, I could not understand those moves at my rank back then, but afterward, knowing the best moves and having spent time with them, I was never tricked again when playing people of my own rank—and I climbed a few ranks quickly.

So, instead of completely ignoring joseki and then telling other people what to do, try a different approach:

Note: the above excerpt is from a book that is copyright by Immanuel deVillers and released under a Creative Commons License: CC BY-NC-ND 4.0.

The only thing you really need to know about the 3-3 invasion is - if someone invades what you thought was YOUR corner, do not try to kill them outright. You will fail and just get yourself into more trouble.

Instead just do one of these and you’ll be fine: 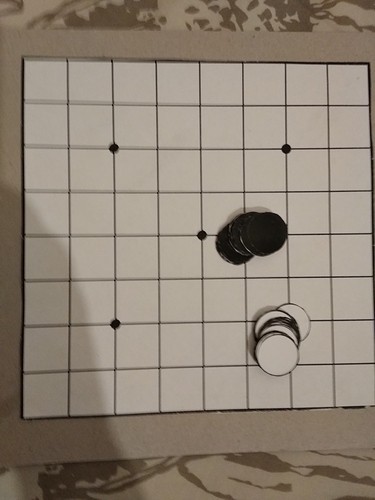 I should clarify - all of the joseki discussed so far (and all the examples here: https://online-go.com/joseki/39) are based on a 19x19 board.

The joseki for 9x9 games are COMPLETELY DIFFERENT because of the smaller size of the board affects everything:

That’s all I have

Just print off 3 more copies of that same board, tape them all together, and BAM you’ve got a 19x19 board

I glued it in the center of my cardboard. I’d need more cardboard at 22:00. I have a slight OCD, mismatched board might kill me

Well-written post, but in the last diagram I believe the extension to L16 is too much. White should play L17 or M16, dependent on the wider position.

You make a good point - but if you look at the OGS Joseki page - they are fine with both a 3-point extension and a large knight’s move at that point:

A good reminder that - in Go - it’s all situational. Your advice is an excellent point when playing against an aggressive high-level opponent, but would probably work fine for 90% of 15-20kyu games.

IDK, I would consider those questionable. But then again, the people making OGS Joseki are stronger than me. 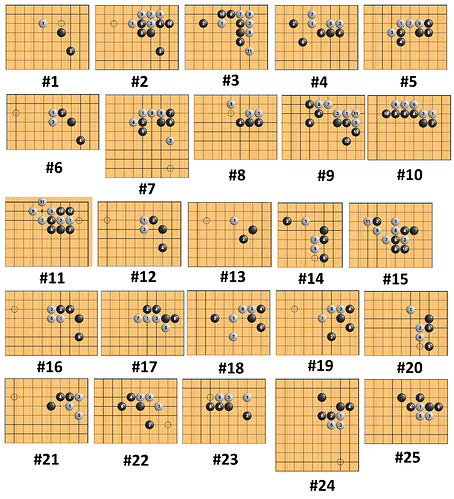 I’ve tried to choose the most simple and common variations. The circle represents an optional continuation by the player who has sente from the diagram (not that they have to play it immediately.)

#2 is a post-bot sequence, superseding the pre-bot slide (although the slide is still absolutely playable.)
#3 is a slight post-bot shift from the pre-bot variation in which (10) was the solid connection between (8) and (4). There is some important difference in the nature of the shape weaknesses.
#4: pre-bot sequence, looking like it may be slowly falling out of use in favour of other similar variations.
#5: pre-bot sequence, now seeming to be getting replaced by a post-bot variation which omits the (3) for (4) hane exchange.
#9 is on the border of what constitutes a joseki and may be bad for White in the early game. The advantage of this is to avoid entering either of two complex variations.
#14 is standing in for all low-approach pincers, but actually in larger pincers the push-and-cut response (as seen in #15) can start a complicated fight. Still, the one-space jump isn’t simple either if White wants a good result.
#17: I recommend not to play this as White unless you are happy entering the complex “small avalanche” variation that Black can begin by playing (6) at (7). In this simple variation White’s shape can also be difficult to work with.
#23: (4) at (5) is also common, and is more difficult. So it may be worth thinking twice about invading 5-4 at 3-3.
#25: There is also a harder variation beginning with (6) at (5). It’s fine not to play this forcing move if you’d rather not have to enter that.

Ok. If #1 counts as joseki, 23k is the right rank to learn some. O never associated 5 move sequences with the term joseki.

I’m thankful and a bit terrified.

Now I’m sure I had misunderstood the term.

I find these actually really good (relatively) simple josekis, but its important to remember that each of these have few variations to choose from ^___^

Like with #16, white could choose tiger mouth at N16 instead solid connection at O16 if w wants to extend bit further on top. Or black could play Q15 instead R14 if area around R13 is worth developing.

Its always important to remember what do you want to achieve locally while keeping the whole board stucture in mind, and then choose joseki (or choose a moment to stop following joseki) accordingly.

Its always important to remember what do you want to achieve locally while keeping the whole board stucture in mind, and then choose joseki (or choose a moment to stop following joseki) accordingly.

If you are able to do this, you are already at the upper DDK ranks (probably even SDK) without the need to remember 25++ joseki (++ because of the many variations).

But yes, even as DDK with only 5 of those josekis in mind, one should remember this.

I guess the only thing that hasn’t been said is:

There is no “best way to study”, just do what you want when you want. If you hate studying joseki, don’t study it (just learn the most common ones)