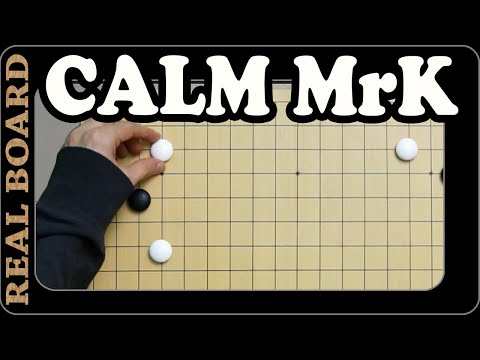 Around the 35 min mark, W resigns. Why didn’t W pursue the G13 ladder that works favorably* to force B to leave that big group alone or something?

Is it because they were already behind and it wouldn’t be enough anyway?

Dwyrin only reads out the group in question, so probably the answer’s obvious, but could someone explain for DDKs?

(I tried finding an sgf to accompany, no luck, sorry)

*to the best of my abilities to read, I really tried

You mean why not run out at h13 rather than capture at f14? That is indeed a natural move, more so than capture and inviting the squeeze IMO so disappointed dwyrin didn’t cover it. J13 next is a natural tesuji but there’s more reading to do. F14 connect is the other obvious choice to read.

Yes exactly. It seems legitimate enough as an option (to me anyway), so I don’t understand why it wasn’t even mentioned.

Short answer, yes, white was already too behind.

Longer answer, for white to turn around in this late stage in yose where territory can be counted very precisely to every single point, it generally requires some kind of ko to happen (even this was not quite possible, unless black allowed it). And black had created a ko factory inside the white territory. Removing any possible chance to win a ko for white.

As to why not when into scoring? I think it’s a personal preference. Pros at this level would have no trouble counting and playing perfect yose at this stage. Resign saved everyone time and acted as a courtesy for stronger players.

waltheri sometimes gets the result wrong for older games (especially those with older komi). Go4go usually has more complete and accurate records (but you have to register)

This isn’t about a ko factory, it’s about capturing some white stones. Given that white hadn’t resigned before, but resigned upon these moves inside, strongly implies he blundered and black has something working inside. The reading is harder than the line dwyrin showed though.

Can you perhaps show us how white stones can be captured? I’ve been searching for a while, including with some assistance by KataGo, and can’t find any way Black can capture anything.

I thought I had one but this last var seems to be white refutation. Kitani Minoru vs. Fujisawa Hideyuki

But like I said white psychologically wouldn’t resign now just for ko threat factory (there’s no ko left), so either I missed a capture (change order) or Fujisawa missed the refutation, or he strangely resigned after some irrelevant black moves.

We need some context about this game. It was played in 1960 for the Honinbo title league. Kitani Minoru and Sakata Eio had a massive lead in that year’s league, and were the most likely to became title challenger (they ended up both have 6-1 win-loss in that year’s league and had to play one extra play-off to determine who would be the challenger).

But on the other hand, Fujisawa Hideyuki had a very bad year in the honinbo league, and would certainly get kicked out of the league for next year, and Kitani Minoru was already 51 years old at the time, well respected by everyone, and everyone knew he had a bad heart and weak health. I personally believe Fujisawa Hideyuki resigned part out of courtesy for Kitani Minoru, and part wanted to put his effort in the Meijin title match (旧名人戦, but at the time, just 名人戦), which he put great effort to made it happened (Fujisawa Hideyuki was the public relationship director at the time in Ninhon kiin, in charge of contacting corporations and sponsors), where the total prize money for this “new” Meijin title tournament was as high as 25 million yen (while the Honinbo title tournament was more about the fame at the time and each game they only got 60,000 yen). Consider Fujisawa Hideyuki’s reputation of liking money and gambling, I am not surprised Fujisawa Hideyuki chose what he did at the time.

I’m not surprised Fujisawa or any pro resigns in late endgame of a close but certainly behind game. What I am puzzled is why resign after Kitani has played those ataris inside his territory, rather than before, say move 180 to 196. If we are saying that black’s ataris inside don’t actually give a working sequence to capture anything then I am also surprised Kitani plays them, as it’s like the rude online players who play pointless sentes inside your territory in the hope you forget go is a 2 player game and you get to play a move after them. So given Kitani played them, and given Fujisawa resigned after them, it strongly suggests they actually work They don’t look like your typical slow and safe “please resign now I’m so far ahead” moves either. They look like “I played a sente dame that you didn’t answer and I’m punishing you to win by more than I was before”.

We probably also need to consider Kitani Minoru’s personality. He was on par with Go Seigen for decades, and had a reputation as a very strict and great teacher. I don’t think it’s that simple of a question about one local sente.

Fujisawa Hideyuki was 16 years younger than Kitani and famous for his “craziness” and “creative” playing styles. I feel it was more like a teaching moment from Kitani to warn Fujisawa to put his feet on the ground (and Fujisawa didn’t return to Honinbo league until 5 years later in 1965, with big wins but also big loses all over the place. Anything is possible for Fujisawa to be honest, did I mention he was also an alcoholic?).

I like reading your extensive historical notes. They make me think of books like Tolstoi / War and peace in which the war is mostly won thanks to some external circonstances (weather, food, a party the same day… ) as by the generals and their plans.

Fujisawa was also famous for the quote that he only knew 6 out of 100 for the game of Go (and ofc he said it after he was drunk).

What I am puzzled is why resign after Kitani has played those ataris inside his territory, rather than before, say move 180 to 196.

Maybe they wanted to leave a puzzle for their pupils (and people of the future).

So it wasn’t just me, it really is weird.

Yes. Personally I’d like to believe there is a working sequence for black and we just haven’t found it yet because that makes the playing and resign after the inside moves make more sense then either the pros thinking it worked and being wrong because they didn’t read well enough (Kitani was known as an excellent reader, whilst Fujisawa was known for blundering) or knowing it didn’t work but playing it and resigning anyway.

As for the level, if they thought it worked and it actually doesn’t, that proves this is a pro level problem, not a DDK level problem! And for the sequence dwyrin showed with capture and squeeze, I might classify that as a problem a high sdk could probably solve if presented as a problem with a known answer, but I wouldn’t expect a kyu to find it in a real game. And with h13 that’s a dan level problem.

Kitani was known as an excellent reader, whilst Fujisawa was known for blundering

Although as Kitani was already 51 at this point, combined with Fusjisawa’s crazy blunders, I feel we cannot not rule out they both read the sequence somewhat willing-nilly.

Another issue is time pressure. I have yet found documents about the exact time control format for the honinbo league tournament back then, only that it was a 1-day game. Older generation players like Kitani might be more accustom to longer time format, where they could literally play through the night. I feel I need to dig deeper in the history of time control format and how the custom of countdown emerged in the 20th century. From very old records in the early 20th century, they only count to the minutes instead of seconds. 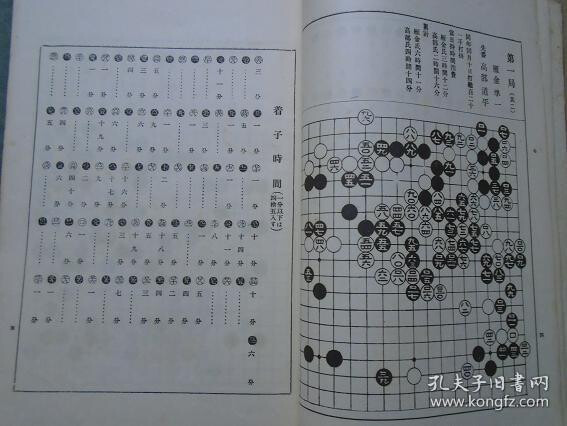 This is a page from the game collections in 1925(大正14年) of Hiseikai (裨聖会, it was a splinter association that disagreed with the just formed Ninon kiin integration policy, along with the rivalry between Honinbo Shusai and Karigane Junichi). The early format of byoyomi was very different from what we know today. How they changed in between, especially after WW2, the revival of newspaper Go, and the rise of TV broadcasting Go would be an interesting subject to research on.