Hi,
i would like to know, if it is possible to kill a 33 invasion in this situation. I couldn’t find a way to do it reviewing my original game and the opponent just left at move 88, so it wasn’t played in the game.
(Original game)
Thanks for reading

This is the third time I’ve updated this post, swinging from “white lives” to “white dies”, stopping at “there’s a ko” along the way.

This post suggests that Black should be able to at least force a ko on White, from his two small knights:

Learning about when the corner is safe Teaching

However, with white C3 then black B5 I currently can’t see a way for white to live. I put the variation in where black appears to force white to die.

I’m just a DDK, so I’m posting this for some guru to come along and correct.

(@kickaha I saw you looking at it

Threw a few thoughts in the comments myself, I think black can kill.

i am pretty sure

white should die. but black has to be careful to stay connected, otherwise there are some liberty problems.

EDIT: its not easy… and i am really not sure anymore, but so far i havent found a life for white if black just connects E3… no guerantees

It’s amazing, for such a “straightforward, strong looking” position, how uncertain the outcome is!!

And would be positively depressing to have that invasion survive under that wall!

@jansen_jansen I think the moral of the story is that two small knights don’t secure a corner with certainty, despite all that re-inforcement.

In order to secure it, you need at least a diagonal - E3 or C5. As you built that wall, you could have sneakily "pushed outward less strongly (one might say “less greedily”

) and placed the stone on C5 instead of D5. Then you would have had a cut to defend, ending up with a stone of C4 as well.

I showed what I mean in your review. I didn’t try to play it out, but the “general guidelines” that people share from their experience says that this ought to be a whole lot more secure.

Many thanks to you all!

I’m a bit overwhelmed by so many people looking into it. Thanks for all your efforts!
(it took me some time wrestling with that navigation tool, therefore the late answer—plus the many variations)

@GreenAsjade While we played that corner i didn’t think about a later invasion. That shoulder hit really confused me. When i looked into the game afterwards i thought i should’ve played c3 instead of the upper left corner to make this group safe, but it is probably better to play more solid before that. Wall at the outside, invasion inside isn’t very good for black

Anyhow, i learned one more lesson about “44 not equals territory” and i like how White can exploit them cutting points from the inside.

Just because white can live by ko in the corner doesn’t mean it’s a failure for black. If your objective was to secure the corner you wouldn’t play the 4-4 point in the first place.

Black has very strong moves at D8 and H4. The white invasion helps fix black’s cutting points, and then black can regain the initiative to play D8 or H4.

If white protects D8 and H4 first, black should strengthen his position in the process, and then living in the corner will become more challenging.

I appreciate that a ko is not failure, though at my level of play is is far less desireable outcome than territory

While playing the 4-4 was not intending to secure the corner, once black made that wall underneath white, would you consider that securing the corner is now the only acceptable outcome?

It seems like black played 4-4 for influence, then conceded that influence to white, who tempted black into thinking he was getting a big corner in exchange for white taking the infuence.

At that point, it feels to me like “white got a wall and all I got was this ko” seems like a sad outcome to me…

Nobody said that the initial sequence was good or even fair for black.

White F4 was an abusive move, but black failed to punish it with F5.

After that, white played a couple bad shapes that opened the door for strong black counter-attacks at D8 and H4. For example I would expect that a sequence starting with black H4 will reinforce black’s lower side, indirectly protect the cut at E3, and possibly change the outcome of the 3-3 invasion.

I would certainly not call white’s shape a wall. Even if there were mistakes on both sides, look at the actual game and you’ll see that white’s budding influence was easily countered because of the threats to cut at F5 and H4.

Thanks for outlining what black should have done in response to white’s aggressive F4 - that’s definitely something I would struggle with if someone did it to me!

D2 or C2 look like good responses for B

White F4 was an abusive move, but black failed to punish it with F5.

I really didn’t see that, but now i played around with it, i like it very much.

Added my own review. It’s important to know how to kill 3-3 invasions when you have surrounding stones. You shouldn’t just play out the normal descent on either side as that may lead to ko. In an area that surrounded anything but complete death should be considered bad for black. 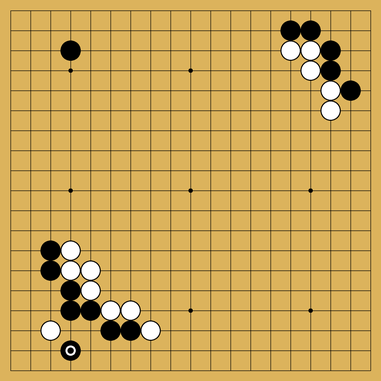 Thank you very much for your thorough review @jmdingess !

(Due to access problems and some urgent stuff in RL it took me some time to look at it and thank you here.)
Seeing this jump down at d2 broadened my Go-horizon, it’s nice to protect the cutting point and attack with the same move!

And it’s great to know that such an invasion should die!

In an area that surrounded anything but complete death should be considered bad for black.

Honestly “surrounded” is a vague concept, and as soon as there are cuts in a shape you have to acknowledge that the opponent can take advantage of them.

This is definitely a complicated life and death situation, below a tentative continuation of one of @jmdingess’ sequences, where black tries too hard and ends up being the one who gets killed: 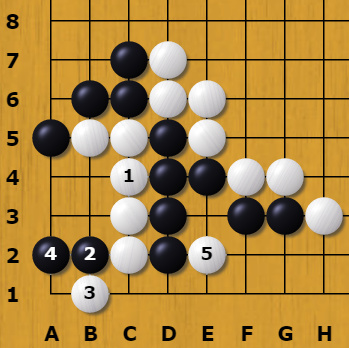 it’s great to know that such an invasion should die!

Keep in mind that the objective of the game is to make territory, not to kill. As I said in my earlier comment, black has strong moves against the external white stones, and even if black could kill the invasion, it might be better to let white live in gote and take the initiative on the outside. I don’t see white dying unconditionally here, and I don’t see why it should.

Going by my personal analysis that you can see posted in the game last month, I still think the result is ko. As far as I know, no-one been able to post a variation going all the way from Black’s first response to clear death of the invasion group without that variation having been refuted to a lesser result.

And it’s ok if eventually somebody finds a variation that does kill white. Hopefully at this point everybody understands that any slight change in the position might change the conclusion, and there is no such general rule as “white is surrounded and should die”.