Hi all - I recently joined OGS and have played a few games and have really enjoyed it so far. My rank has fluctuated between 25-23kyu as I continue to play (currently completed 13 games).

I turned on the “Show uneligible challenges” just to see the number of open games. Most which show up are are clearly due to rank restrictions (i/e SDK games). But there are quite a few games where the player is the same or similar rank and it states “Can’t Accept”.

My best guess is that the player created a “rank restriction” when creating the game, but would have thought most players would want to play others of similar rank. So I found that odd. Is there any other reason why these games would be restricted? Is it due to the low number of total games I have played on the server?

They may be restricting it to stronger players in order to improve.

On the OGS play page you have an option to create a custom game (see the following screenshot). 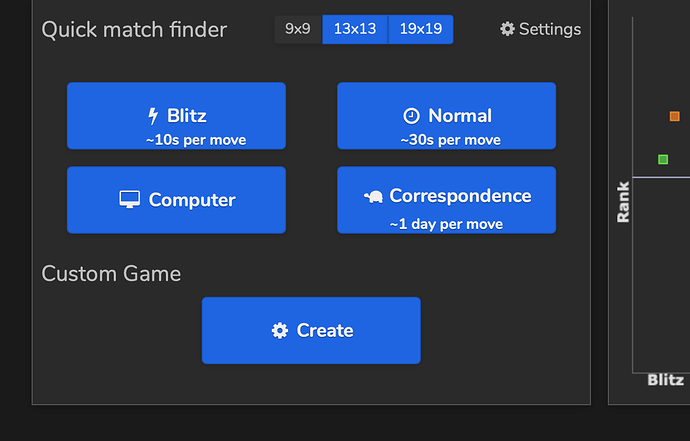 When you create a custom game you can set min/max ranking you want to play against. In the screenshot below you see a player who choses only to play against other players who are not above 1D level or below 18 K level.
Stronger than 1D and weaker than 18 K are off limit. 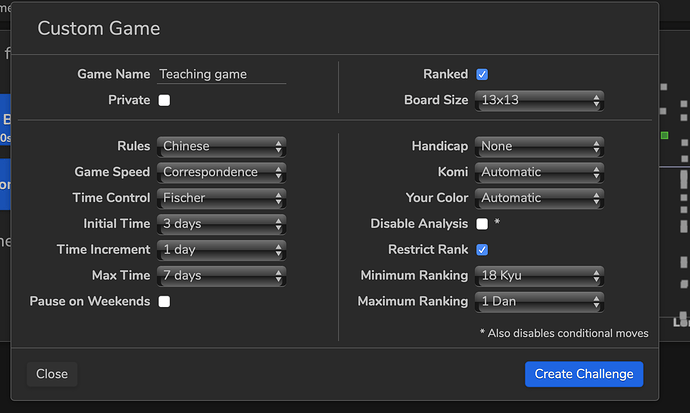 So that is where uneligible challenges come from.

@Conrad_Melville and other mods: the word uneligible is incorrect (it doesn’t even exist). Correct is ineligible.

Thank you @Atorrante for explaining. And agreed, “uneligible” is incorrect. I had to double-take when I first read it.

You are correct. The proper word is “ineligible.” I had to go to the Play tab to see what this was about. Never knew it said that, as I play only personal challenges (plus our current tournament). That would have to be fixed by our developer, I believe.