The power of handicap stone goes up somewhat exponentially instead of linearly from what stronger player told me. So that’s probably why the handicap is capped at 9 stone because soon the game became unplayable(vs anyone stronger than 18k) if it keeps going up.

The gap between 6 and 5 stone is larger than the gap between 5 and 4 stones due to its placement. I’ve read books about handicap game and I’ve played a lot of handicap games(as the person receiving handicap) so I would say that’s kinda true.
6>>5>4>>3>>>2

Also, some might believe that it’s impossible for a 3k to lose with 15k handicap stone. That’s not true, I’ve lost with 14 handicap stone with a strong amateur. In general, the longer the time setting, the more beneficial the game is to the weaker player. Also, handicap giving skill is not equal to player strength(some player are good at trick play). So on my best day, I won a few games with 3-4 stone vs tygem 7d who is not so good at giving handicap, on my worst day I lost with 9 stones, 10 stones, 14 stones (not by timeout or one big blunder) and 15 stones in a row vs tygem 9d who is great at giving handicap. That’s a very humbling experience.

14 stones free placement, I played this game till endgame and lost by 24 points lol. 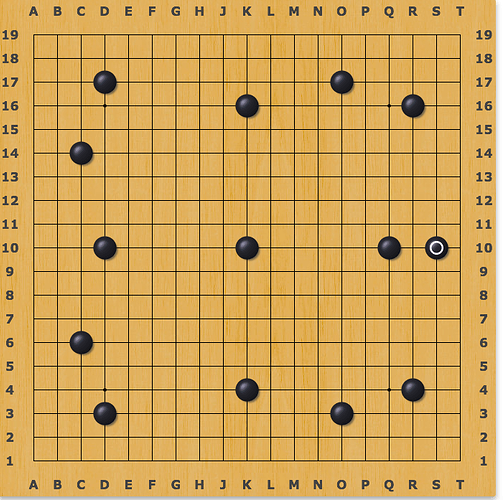 Well, you played moves that are very uncharacteristic for 3k… and didn’t seem to read much in general. I take it you never play blitz?

Quote:
I went through “Graded Go Problems For Beginners Vol 1 and 2” by Yoshinori fairly quickly but now stuck really hard in the middle of Vol 3. Also the “Lessons In The Fundamentals Of Go” by Kageyama listed some “beginner problem” which I found to be very hard to comprehend. I feel I’m totally novice level despite I can sometimes win against much higher ranking player.

Just answering on this, you are not alone to find that the level aimed by the titles of this problem collection is out of range.
Not to say that they are not interesting…

Kageyama’ book is not aiming at beginners so when he says “beginner problem” he’s not expecting a beginner to do it :D, more like a provocative way to hold on the sdk reader.

I think terms like “beginner” or “elementary” are often used in very different ways. I think a lot of people say “beginner/elementary” to mean complete novices (i.e., people that have just learned the rules and are just beginning to study tactics/strategy, or 20+ kyu), but I’ve found that in the extreme some authors will even use “beginner/elementary” to mean anyone short of shodan (i.e., below 1 dan, or 1+ kyu). This is particularly true for various Kiseido books, where they even have series called the “Elementary Go Series”, which is really appropriate for people approaching and working through the SDK (single digit kyu) ranks.