Redstone at Board Game Arena

Redstone, a Go variant, can now be played at Board Game Arena. 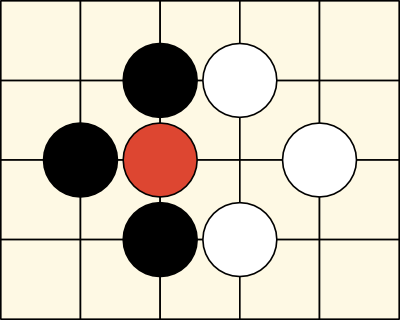 Play board games online from your browser

The world's #1 platform for playing board games online. Play hundreds of board games from your browser for free.

I was excited to test it out.

Although whether to do it here or the original thread I’m not sure.

Is there a discord server or other place that discussions go on about the game?

This was my first game of it 9x9 on BGA.

And that was the game. It was interesting and I’ll hopefully play a few more to see how things are different.

Mechanically it seems to work well, on mobile I tried it. The prompt for choosing a redstone or ordinary stone is useful, and only when it’s needed it pops up that I can see.

Very interesting. Thanks for posting that.

I do have a discussion group which you’re welcome to join.

Check out the Mark Steere Games community on Discord - hang out with 34 other members and enjoy free voice and text chat.

Meanwhile, I’ll see if I can direct some Redstone enthusiasts here.

Btw, you can turn on board coordinates and legal move highlighting in the menu.

I’ve played one game and it ended with a resignation.

But in case of a close game, I’m wondering about endgame. It looks like playing inside the opponent’s territory would be profitable.

It looks like playing inside the opponent’s territory would be profitable.

Here’s another game that was much closer, naturally there’s going to be some mistakes, but some mistakes are even bigger with the redstones!

With this hane, it seems to be the case that I can’t block white from connecting under! I think if I block with A6, white can play C6 and I can’t just capture with B6, because captures have to be redstones, and redstones do simultaneous captures! So that captures my two stones and the white two stones.

I think you can cut if you accept to sacrifice two stones:

Also I forgot about @Vsotvep’s tool. Very useful for adding the redstones

Need to train my eye for some of these variations

I also think you attacked the white stones in the top right with the wrong atari:

I think there’s other little tricks too.

Not as clever as your example though

Normally the white stones are captured at the top left, but there’s a trick (that at least worked in a game) 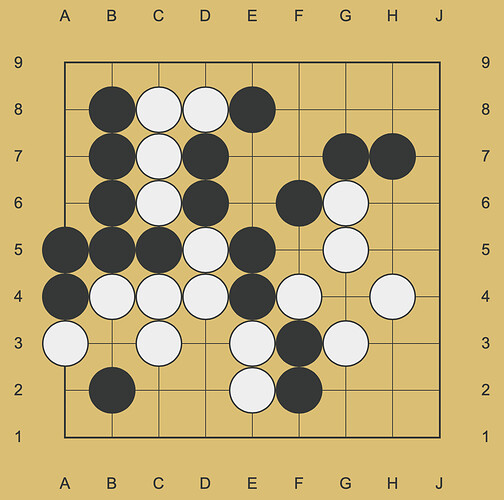 I just played a game against shinuito. They won by a large margin after killing one of my groups in a merciless damezumari.

We encountered a fun shape where a single black stone is alive in what used to be white’s territory, but pretty much became “neutral territory” after many captures: 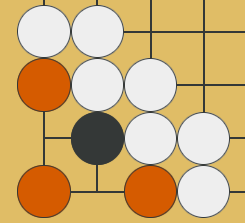 You can replay the games, but there isn’t a back button, so if you go too far forward you have to restart sadly 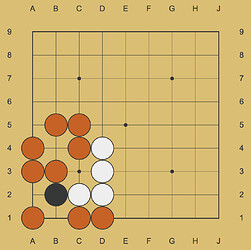 Oh this triggered a moment of understanding for me. So if I understand correctly:

Have you played atari-go before? I don’t mean playing atari-go as a very basic way to introduce the game to a complete beginner, but I mean playing atari-go between two go players. If no one makes obvious mistakes and gets captured too easily, then the game goes on until the board fills up. And then, players fill their own territory, until one player has no territory left, and is forced to play into the other player’s territory, and immediately lose the game because of this.

So atari-go naturally evolves into a game of territory.

It’s a bit like this in redstone too. However, from the two games I’ve played, I must say I am very intrigued by the endgame. It appears that once the board is filled, you shouldn’t necessarily play into your own territory. Sacrificing stones in the opponent’s territory appears to be an important endgame tactic to avoid playing into your own territory. That’s pretty weird. I wonder if @MarkSteere has more experience or knows someone who has more experience, and who can tell us a bit more about the endgame.

In the abstract games article they have a small mention about endgame.

The endgame in Redstone is quite different from that of regular Go. It comes down not to the largest territory, but rather which player has more eyes. When there are no other moves left, a player must fill in his own one-point eyes. Then, down to one one-point eye, he will be captured­—by a red stone, of course.

At first, it may seem that following the creation of a sizeable vacant space by means of a large capture, that one or both players could start playing in it, triggering other captures, and so on. However, this process would be as meaningless as playing in secure enemy territory in Go—you need to be able to make two eyes for it to be worthwhile.

Redstone needs much more investigation, but we can already see that Redstone has tactics and strategy not present in Go. And at least the tricky ko rules in Go are needed no longer! ​◾️

It seems to suggest that it’s not worth playing in the big empty space as if it only delays the inevitable.

However from our game @ArsenLapin1 I’m not sure that’s exactly true or as simple as it sounds. You were able to, in the example you gave above, create another living group using the redstones in some captured spaces, which did lead me to filling in an extra eye or two in my own groups.

Redstone needs much more investigation, but we can already see that Redstone has tactics and strategy not present in Go. And at least the tricky ko rules in Go are needed no longer! ​◾️

Which makes me think one could try to mock up some board situations (possibly unrealistic to start with) where one loses if they fill in their own area only. I’m kind of imagining having four separate groups, two for each player, separated fully by redstone, but with some groups in special shapes where you get to choose where the opponent will put a redstone, and hence can use it to make eyes playing inside again.

So imagine Black and white have two two eyed groups and no other neutral points to play: Black to play and kill one of their two groups. It could depend on who gets the last move in the “dead space” as to whether White will have to kill one of their own groups next?

Here is an easy example of a position where playing into the opponents territory is the correct play: 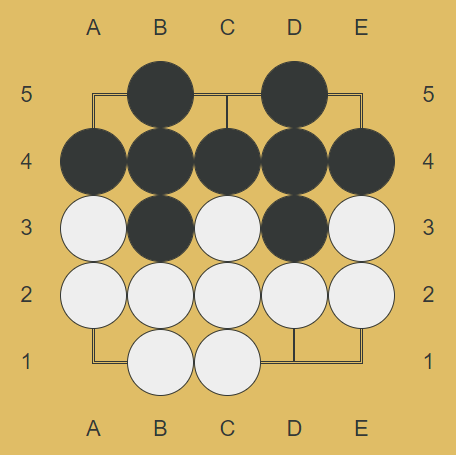 @ArsenLapin1 I know nothing about Go or Redstone play. Ten years ago, a younger, smarter me, motivated by the elegance, tradition, and mystique of Go, designed Redstone as an exercise in architecture. Now I don’t remember why I made it exactly as it is, but I trust that my former self had good reasons for all of the specifics. I’m not one to flip a coin in construction decisions.

The one decision I’m most intrigued by is why you changed the way captures work when a move removes the last liberties from both player’s groups. In standard go, only the opponent’s group is captured. In redstone, both groups are captured. Other design decisions in redstone look fairly logical and a natural consequence of using red stones for capture; but this one rule looks somewhat arbitrary. If you can remember how you chose that rule I’m very interested.

On boardgamegeek, someone asked about that rule too: Bluestone (more partisan captures) | Redstone

In my game against @shinuito the other day, that rule had a pretty serious consequence: in the following diagram, it’s black to play. Black would like to capture the four white stones on the left side, and consequently kill the big white group. But in redstone, that capturing move is also a suicide. 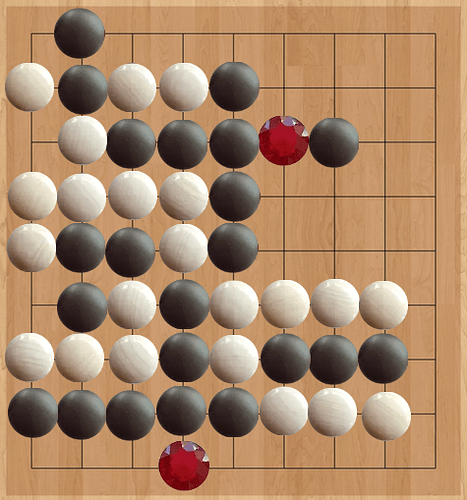