Redstone at Board Game Arena

So when black plays J7 here, white would A8, right? 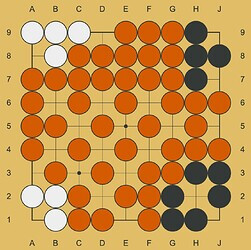 This is essentially just no-pass go (in both cases the first player that has to “suicide” a group (fill the second-to-last eye) might as well resign in practice - or is this not true of redstone?).

That’s certainly how it felt in my game against shinuito. White had “only” 4 more points of territory than black; after I sacrificed my first big group by filling my own eye, we kept playing a while, and funny stuff happened, but none of that funny stuff had any real implication on the result of the game. White was ahead before I killed my group, and even more ahead after I killed my group, and I don’t think the funny stuff could have changed that.

Note that my comment there was in response to shinuito’s suggestion for a non-redstone annihiliation variant. As we saw in the examples above, the redstone captures actually do make a big difference in how some of these situations play out.

But it does seem like what you describe here is the most common result of “suiciding” a group, with “profitable suicides” being an exception to the rule:

I agree with your post other than that the obliteration rule seems arbitrary, as I’ve said it feels more natural given that the redstones are neutral. Most rules are arbitrary lets be honest. The Japanese rules of Go are filled with many arbitrary rules and judgements just to make territory scoring work well and fit with how the game has been played for centuries.

I dislike everything that is arbitrary in the Japanese rules. It feels like “we had an intuitive idea of how the game of go should work, but we weren’t able to write a ruleset that was consistent with that, so instead we made a ruleset that is somewhat similar to what we wanted, and then we added thousands of exceptions to hammer it into what we wanted. Of course we couldn’t build the perfect list of exceptions, so every two years we get a dispute in a game between two professionals, where the current ruleset with its listed exceptions give a result that’s obviously not what the result in a true game of go should be.”

Even the whole idea that “dead groups can be removed for free at the end of the game, even though it wouldn’t actually be free to remove them during the game, since playing inside your own territory to capture the opponent’s dead stones costs one point per move” is problematic. Chinese rules are much more simple. Actually killing dead stones during the game truly does not cost any points, and it’s purely a convenience that both players can agree not to do it. Tromp-Taylor rules take the simplicity even further.

Chess is really a big collection of arbitrary rules that have been used to fine tune the game over time and make it interesting (one might argue), e.g. pawns can move two spaces on the first move (to speed things up), en passant, castling only when the pieces have not moved originally and are not in check etc.

However it seems to be more about whether the rule provides something different enough that interests you rather than how arbitrary the change is.

One might say that “chess but when you capture a piece you get to take that piece and place it back on the board as your own in a future turn” is an arbitrary change, so let’s “just play real chess”. That’s of course fine too but some people enjoy playing Crazyhouse - Wikipedia chess because it’s not just an arbitrary change like

“I have this chess variant where everything is exactly like chess, except when a pawn makes a double-move, all pieces can capture it with en-passant capture, not just pawns”

Edit: (Not to ignore your points about area scoring rules - I do agree that some of them are certainly less arbitrary and probably more beginner friendly than Japanese rules too. It’s just Japanese rules is still quite common and there’s probably still some abitrary decisions one has to make about no results - whether to use 0.5 in the komi or not to avoid draws - scoring seki though some seem more natural when the scoring is area based anyway )

I guess what I’m getting at @ArsenLapin1 is that sure picking some rule and changing it is arbitrary in the sense that the question “why did you pick this one rule and change it that specific way and not another way” might not have a good answer or one that you or I agree with - it’s probably a personal choice.

One can do all sorts of things with go like change the number of players Fractional Multicolour Go and Diplomatic Go or change the scoring of the game Pyramid go 🔺 or change the geometry of board you’re playing on - be that by changing the grid or adding holes/neutrals in the beginning Random Gaps + Pie Rule not to mention all the variants at the variant go server https://go.kahv.io/

I just thought that while choosing the “obliteration” method is technically an arbitrary choice among others, this one made sense with the context of the capturing stone being neutral though it is played by one player or another.

Equally so I suppose we can object to any or all variants because the original (or some version of it with area scoring) is the best, most interesting, most complex etc.

I think our particular game of Redstone @ArsenLapin1 was probably the most interesting I’ve played so far. I probably should’ve lost with normal go rules, but I found lots of interesting (if objectionable) things came up.

Perhaps “arbitrary” wasn’t the adjective I needed to best express how I felt.

Maybe it’s just a question of magnitude. For instance, Pyramid go would be interesting to try. On the other hand, if you made a smaller change such as “Let’s play go, but during scoring, hoshi are worth 2 points of territory instead of 1”, then I wouldn’t be interested and would rather just play go.

For some more redstone weirdness, I played somewhat aggressively in this game by playing at the 2-2 point in this shape with the hope for some redstone related shenanigans later. 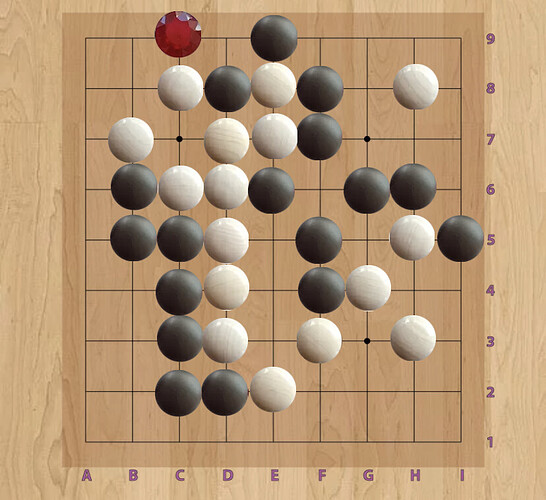 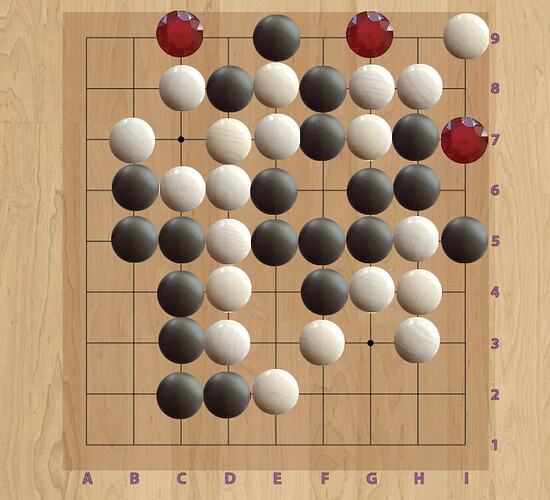 I got caught out in a life and death puzzle in the corner. White captures the corner. 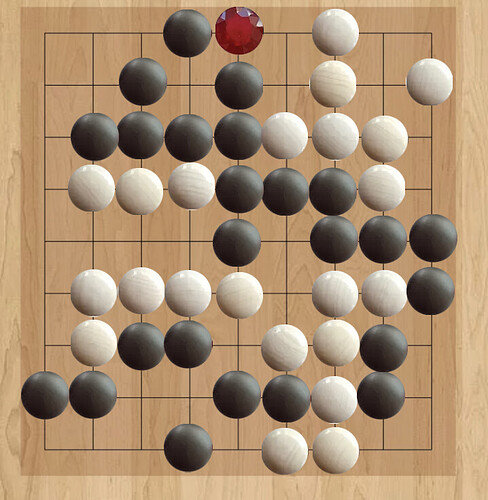 I agree with your analysis, although with white I would have played D2 as the first move.

If Black immediately captures at C2, that puts a red stone at C2, and white can follow up with atari at E3.

If Black instead tries to connect at E1 or E3, white plays E3 or E1 which is atari, and Black cannot save the stones.

If black tries anything else, such as making an eye with B1, then White ataries at E3, and black again has no defense.

That also seems like a good variation for white!

I was very doomed so as Black

D1 was probably quite bad in hindsight so.

The redstones do make some things tricky.

The tigers mouth might be dangerous to the tiger 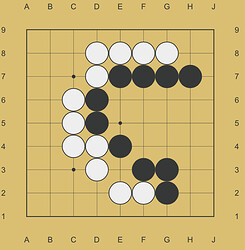 If Black plays the tigers mouth to defend, even pre-emptively it seems to allow a throw-in in a snapback like move also. 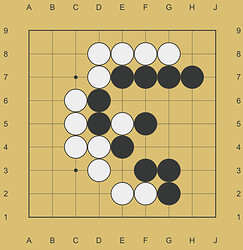 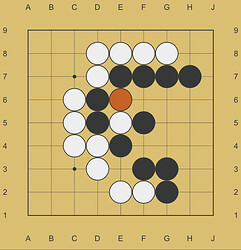 I made a mistake by playing at E5 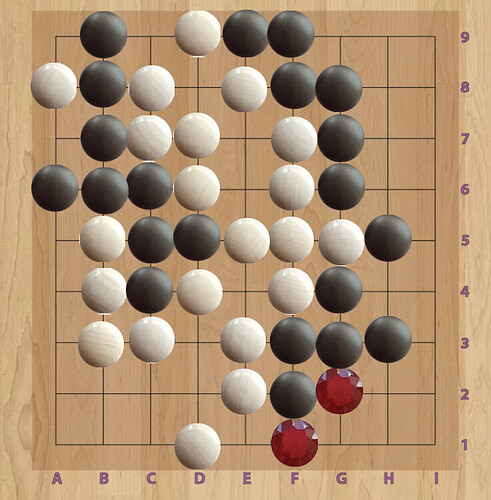 Black to connect on the first line

Later a seki in the same game on the right hand side: 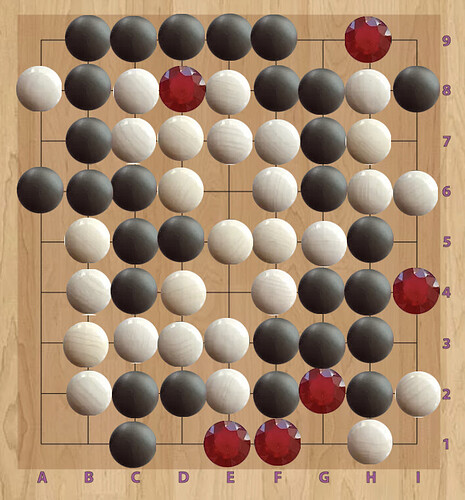 I’ll keep posting some tactics or interesting problems if people find it interesting.

I played this cut at H3 in a game. Can White stop Black from breaking into the area? 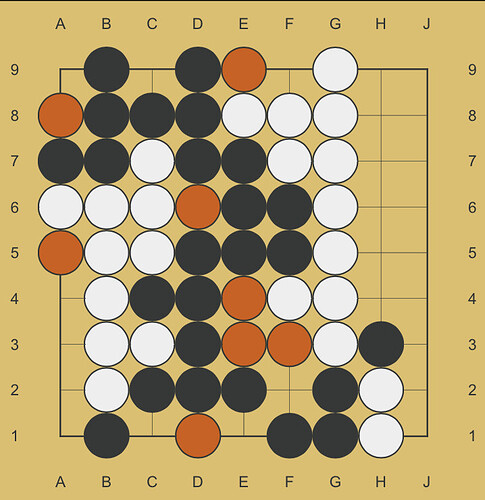 The board to play with https://vsotvep.github.io/MulticolorGo.html?st=abcacaadbaecbaabbabcabdbbebbfbbgbbhbbiacbaccbcdbcebcfacgbchadaadbadcaddcdeadfadgadhadiceacebbecaedaeeaefcegcehafbbfcbfdafeaffbfgcfiagabgbbgcbgdbgebgfbggbghagiahgahhbhib&bs=9

I find it interesting. I check for updates every day.
Kerry has described it as “beautiful”, so you have at least two fans.