Referees and clocks in Vladivostok

Storytime. The story is pretty much on VK from Igor Burnaevskij 6d here. But to not subject you to google-translating it, I summarize it here. I also cross-referenced it with his review stream and live broadcast of the event so the text here isn’t just a translation.

We don't have the account of the opponent, Timur Sankin 6d, which is a little one-sided, but what can we do.

Along the WAGC, other tournaments took place in Vladivostok, one of them is the team championship (of Russia). One of the games was Igor Burnaevskij 6d vs Timur Sankin 6d. Here’s an SGF right away:

In a complicated fight, white and black got into semeai, and at 134th move, Timur (Black) run out of time, because the clock didn’t make a sound and Timur was in thought so he didn’t notice the time, khm, visually. 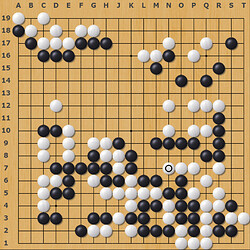 Note that these clocks were a new model, probably ordered specifically for WAGS/Go Congress in Vladivostok.

With these clocks, you need to turn on the sound with a button. Since the clocks are new, no one knew about it, except for a couple of referees who forgot to announce to the players that that button needs to be pushed. And as I understand other players had trouble as well.

So Timur runs out of time, it wasn’t noticed right away but relatively quickly, I feel. Igor informed Timur that he lost on time. A referee got called and an investigation started. Considering it’s not completely the player’s fault, the referee was inclined to switch the clocks and let the game continue. Since the called referee talked about switching the clocks, it appears he didn’t know about the button either and thought the clock is broken.

While there was a lull due to clocks Igor told the opponent to not read the position (they’re in a complicated fight, remember) because, in short, he shouldn’t think about the position outside of allotted time. They talked some, passersby joined in on the conversation, joked about covering the board with a cloth, and so on.

A more savvy referee joined and explained the sound button. Since it’s more of a technical problem, the decision was to set byo-yomi and continue the game.

Igor insisted that only one last byo-yomi should be returned to Timur, with the underlying logic that Timur already thought about the position for a long time outside of clock time, while referees were figuring the situation out. He also had a trump card of “look at the clock, my opponent ran out of time, why shouldn’t I win on time then”, with the idea that any game continuation is a concession to the opponent, so he should be happy with one period.

Timur insisted on returning all 3 byo-yomi periods and was a bit irritated. He insinuated that Igor knew that the clock’s not working and, I guess, timed him out on purpose or something? But generally, his position was that it was the responsibility of referees/organizers to provide the equipment in a ready-to-play condition (otherwise where in the rules it says it should be players’ responsibility), info about any buttons wasn’t announced anywhere. And if it’s the organizers’ fault he lost 3 periods, he should be compensated all 3 periods.

Referees didn’t want to upset anyone, I think, and wanted a compromise.

Unfortunately, people drifted away from the mic a little. Mostly one referee left in the frame. The referee’s position was one byo-yomi, it appears. Timur promised to write an appeal and started figuring out who is even the chief referee and stuff like that. Igor writes that referees said that it’s either loss by time or one period and that settled it.

Maybe we’ll never know what exactly transpired. But in total, after this 20-minute break, the game resumed with one period for Timur and 11m30s main time for Igor that he had.

But that’s not all. When they played some more and now Igor used up all the main time, it turned out that the referee messed up and set up his byo-yomi as 3 periods of 11m30s also. Do note that when it was uncovered Igor had 10m25s byo-yomi left so even if it was correct byo-yomi he wouldn’t have run out of time.

An argument ensued. (You hear an interesting titbit that actually at the start of the round a referee was walking through tables turning on sound but this pair already started to play, and that’s why it happened, although Timur parried that they started when the round start was announced.) Igor offered to finish with only one byo-yomi on both sides. Note that at this point there isn’t much left to play, Igor has an overwhelming advantage. Timur declined. At this point, referees decided to freeze the game and turn it over to the organizing/appeal committee. After all, they needed the playing hall for WAGC already.

You could see that throughout the circus Igor was chill, and Timur was irritated, refused to speak to anyone except referees, and in general, really didn’t like the show.

After this (and before any decision) Igor writes, someone sent him AI eval on social media, which he looked at before he thought about it. Which is kind of AI assistance. Oops.

Surely, we’ll never know what happened at the committee but they decided to give the victory to Igor and be done with it.

I hoped for a little more clean summary, turned out to be somewhat disjointed.

I usually can read the VK posts, but this one and the group you posted elsewhere refuse to let me.
So direct translation post much appreciated.

Are the same as the “new” BGA clocks and this issue has arisen in various occasions at IRL tourneys here. They are great when set up properly but it’s easy to miss something like the beeps.

When I played my only irl aga tournament 2 years ago, I thought we were told to know the clock and it’s our responsibility. One of my game, the sound was not turned on, my opponent blamed it and resigned, but he was badly losing anyway. It was my first event, and I’ve never used clock before and only relied on eyes, thus never affected me. I might be in byo period, I don’t remember.

What is the official rule? My level of game, there is no referee watching. If this is serious competition, wouldn’t referee test and ensure the clock is working?

No rule says that the clock must have a sound. In most IRL tournaments I’ve been to, clocks were like this: 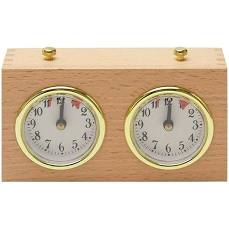 Yeah, at our games, there were maybe over 10 boards in a small room, some may not like to use sound.

It reminds me what I saw on YouTube Chinese A league. It’s much less crowded, but still everyone is in the same big conference room. And unlike big cup final, I don’t remember seeing individual referee by each table

Clocks are always trouble. Maybe a time control where less signaling is required is better.