I would like to propose adding players to the “unassigned” section by default instead of “white” and “black”. Also the “free” section should always be sorted by players’ rating (and as second criteria by name).
This would make it much easier to assign players to both teams in a balanced way. 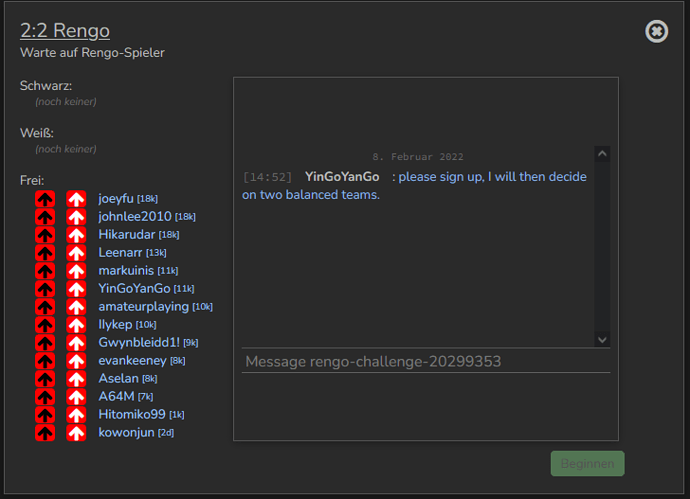 We’re thinking about ordering the lists.

It’s one of those “you can’t imagine why, but actually it’s not trivial to do” things.

The problem with putting them all in unassigned is that not everyone wants to assign everyone.

What about two buttons, for “Auto-Assign All” and “Free All”?

For a niche game played by a niche set of players, this is sure getting a lot of options

I don’t think we need that one…

I don’t mean as an option when creating the game, but rather a button on the game management dialog box (as shown in the screenshot above).

How about even a third button simply labeled with

If I’m not missing any important gotchas, I think both requests (Unassign All, Ordering by Rank) are solvable client-side. But as @GreenAsJade points out, it’s not as easy as unassigned_players.sort(byRank). If any one has a solid grounding in React and wants to take a look, happy to point you to roughly the area of code1 where it happens

I don’t mean as an option when creating the game, but rather a button on the game management dialog box (as shown in the screenshot above).

Not bad actually - extra buttons in that pane are much less like feature bloat - well contained immediate actions.

As @benjito said … it’d be great if someone wanted to have at it!

There should be 2 types of unassigned: those who will not be allowed to join and those who, when game starts, will automatically go to balanced teams

those who will not be allowed to join

Just kick them out

The problem with putting them all in unassigned is that not everyone wants to assign everyone.

Really? Someone creates a rengo but don’t want to organize it?

Then in the manage screen the creator makes the teams manually or:

Note that i would put the no/manual/auto handicap selection in the same screen too.

Really? Someone creates a rengo but don’t want to organize it?

It’s not that one would not want to organize it. Rather, it’s not efficient to have to click everyone into a team every team… especially if there teams are sorted by rank, then it would be much less clicks if they have an initial team assignment.

It’s interesting that the translation of “unassigned”, when translated back to English, became “Free”.

Is that because German doesn’t really have a specific single word for “unassigned”?

Is that because German doesn’t really have a specific single word for “unassigned”?

Maybe we shoud define some use cases / user stories in order to exactly see what we need.

My user story is very simple:

Possible soluiton supporting my use case:
“unassigned” list is always sorted by rating AND one of the following options is implemented:

In geman, “unassigned” would be “unzugeordnet”. - But that word sounds kind of unwieldy, so “frei” (“free, unbound, available”) apparently seemed to be nicer to the tranlators.

Actually I’m a computer scientist and have been developing software for 20 years, although with other technologies and a lot of time in product owner roles.
But if you could give me a ramp up on best used tools / processees / dev basics on OGS, I would try to take on this task… and later maybe even more.
Is there any documentation on dev tools, processees, etc.?

Great! I think the best place to start is CONTRIBUTING.md. It covers a lot of the tools/processes. Definitely feel free to message me if you have questions about specific parts of OGS development

EDIT: tools not mentioned there- everyone uses different tools, but I personally like VSCode + Eslint extension + Prettier extension

For sorting by rank, you’d definitely want some pointers, there’s a gotcha to be aware of (the way those are rendered, we actually don’t know the rank, we just say "display the player’s name and rank).

“Unassign all” button is almost the simplest thing you can think of.

@benjito
thanks for the tool recommendations.

@GreenAsJade / other developers
What are your preffered editor/IDE and dev tools for OGS development?

Up to now I haven’t been working with JS much, but did some development with Java, mostly using Eclipse, NetBeans IDE or Forte for Java.
So any tooling tips for JS/React/Typescript development are welcome.

Is there some chat room for OGS developers?

I use IntelliJ for Java, but the JS support is just better in VSCode. It’s also good to be using the same as @benjito so you get all the benefits of him setting things up properly and tweaking as we go