Dear developer
Hello, I am new here. I am come from IGS because my friends invited me. And in IGS there is something called “Automatic opponent”. You input times, conditions for you to play in range. For example, I will play with the time more than … with … byo-yomi per … moves to the time less than … with … byo-yomi per … moves. I will play from game with … handicap to even game. I will play with 4k ranking players to 5d ranking players. And then, when you feel like playing, you can select automatic opponent search with these conditions. And then u play with another player who use “Automatic opponent” with his/her conditions in your range. it’s convenient and the fastest way for players to play. Of course it is just a “selection”. You can choose not to, and waiting for your opponent normally.
So I have hope that you would seriously consider this, as it would be a very useful application for players.
Hope you have a good day, sincerely.

Automatch is on the agenda, we have held off implementing it until we felt the population could support it without either always creating horrible match ups or taking forever to find a good match. We’re getting there pretty quickly I think, but we’re probably not quite there just yet. In the meantime, the Seek Graph is a pretty good alternative to automatch, simply look for the green dots close to the horizontal line (which shows your rank), and in theory those should be pretty good matches in terms of rank and it’s easy to discern the speed, of course you don’t have as much control over filtering out games with settings you don’t care for without inspecting your potential matches… but it’s a start and works well for our current population

Also, I haven’t seen Automatch make it into the uservoice system, so you should throw it up there at http://ogs.uservoice.com/ so we can gauge how interested folks are in it

@anoek has already answered a lot (thank you for chiming in, and it’s exciting to read that automatch is actually planned

@lovecall, have you tried to create an Open Challenge? (Link to our wonderful new ReadMe)

You can set your options exactly as you’d like them … 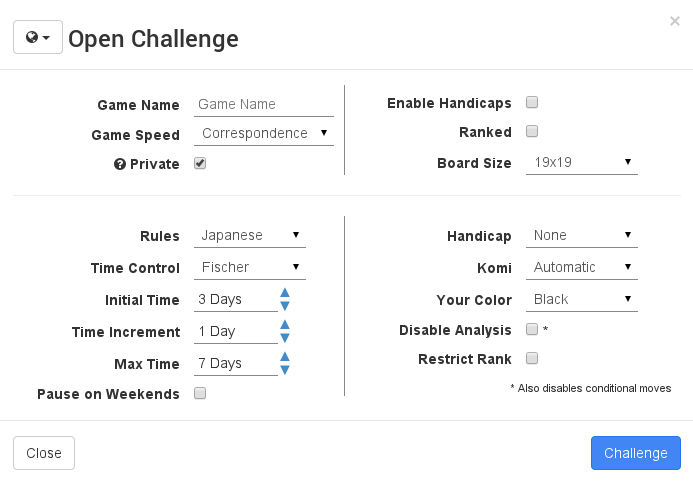 … and everybody looking for a game will see your challenge and can, if eligible, accept it.

Hope that’s fine for the meantime

I see, thank you for the reply, hope you guys please continue to develop it in to a great website.

@trohde Yes, I had. In fact, my friends have been teaching me about the systems right about now. It’s a bit confusing, but I guess I will manage barely just fine. Thank you anyway for your concern and good nature. I really appreciate it, plus the fact that the developers here seem to be such a good active fellow

Automatch has another very useful effect. If you post a game offer at the moment, then the people most likely to accept the offer are those who know they will get an advantage because they know their rank is less than it should be. This is cured by automatch when you don’t know who you will get matched to.

If you post a game offer at the moment, then the people most likely to accept the offer are those who know they will get an advantage because they know their rank is less than it should be.

This is not an issue.
Unless one checks manually the profile of the person who has posted an open challenge and checks if the rating is not yet stabilized. In the end it would take a long checking time to only accept challenges from people who are not provisonal anymore but who “obviously” have too high ranking. Also one’s own rating cannot be “less than it should be” for more than few tens of games. The more data there is the more reliable it becomes.

I say it is an issue and you say it is not. Please keep to your opinion and do not presume to correct mine.

Come on, man. I started this to improve the system. I do not wish to see heat discussion in my thread. And by the way, my automatch didn’t mean people of the same rank face each other, but you can choose whether what kind of game do you want to play, and with what range of opponent ranking.

By the way http://ogs.uservoice.com/forums/277766-online-go-com-suggestions-and-feature-requests/suggestions/6895606-automatch-in-selection
This is the link to the vote for automatch, if you are interested in the idea, feel free to vote on it.