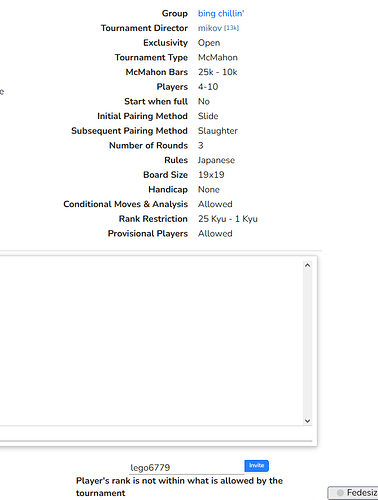 I can not invite this player which is rank 25 kyu despite allowing people from 1 kyu to 25 kyu in my tournament.

Guess it techically is below 25k, but since ogs “caps” all the lower ranks as 25k they should be allowed to join the tourney as 25k.

I think it’s a display problem and the real rank of that player is around 37k.

Yeah I think too, but I can not allow rank besides 25. I can only allow rank from 9 dan to 25 kyu.
Dunno if there is a way to accept people from all ranks ?

Yeah, ranks above 9d or below 25k are all listed just as 9d and 25k respectively. But they should still be included for the tournament limits, so this seems like a bug ://

Yeah I think too, it is why I reported this here.
Dunno if this can be resolved somehow ?

And a terrible bug if that is indeed so, excluding a part of the OGS population from taking part in tournaments.

Yeah, if its a bug its really nasty, and its prolly back-end bug so only @anoek is able to fix it >___>

Could it come from the rating system? Tournaments games are rated so can’t accept more as a 9 levels difference?

I think I reported that here:

Can't invite 25k player to "25 Kyu and above" tournament

I hope it can get some attention; it makes no sense to exclude the lowest ranks from all tournaments.

@anoek can you comment whether it’s policy or circumstance that we have a lower limit on who can join tournaments?

It’s been a long time like that as far as I remember.

No not a policy, I probably screwed up which rank thingy we’re using for comparison, I’ll see if I can see if it’s a quick fix or not.

Ok should be fixed now!