I’m not trying to limit everybody’s fun but would it be better to limit the number of topics in general chat and forum games, allowing more space for bug reports etc.? I’ve seen more and more topics in those categories. After a forum game ended, the forum game creators can close the topic allowing new games. Some topics don’t really serve a purpose. (Sorry if this topic is useless too.)

(Edit:Muting might help but the OGS forum should contain a bit more topics about go, bugs, etc.)

(Edit no.2: Maybe a hide category feature might do too. And how did forum games even started?)

Just mute general chat and forum games so it doesn’t bother you.

You can mute categories here https://forums.online-go.com/u/ginger2008/preferences/categories

Probably because of my mini games thread not sure

And how did forum games even started

And how did forum games even started ?

It all began last march. Many more threads, many “useless” threads, forum games, surveys, topics not related to Go game… have you heard about lockdown?

You could either wait that coronavirus crisis comes to an end or find you way to survive until then. Be gentle with suffering people.

What? They don’t look suffering?

They are. We all are. Trust me.

I personally hate those useless threads created automatically by joseki dictionary: someone writes “doh” in the dictionary and the whole community is notified about. And that’s strictly go related! But it’s crap.
What should I do?
I just skip and move to the next thread.

You could either wait that coronavirus crisis comes to an end or find you way to survive until then. Be gentle with suffering people.

What? They don’t look suffering?

They are. We all are. Trust me.

Oh. I get it. But to be honest, I played one of them before, and trust me, that is a good way to stop you from shouting " I’m BORED! "

It has been mentioned before, but so the information does not get lost.

You can MUTE any category you are not interested in - muted topics will not even show for you in the latest. That includes forum games and joseki discussion, which all have own category especially for this purpose.

Just navigate to any category you are not interested in and: 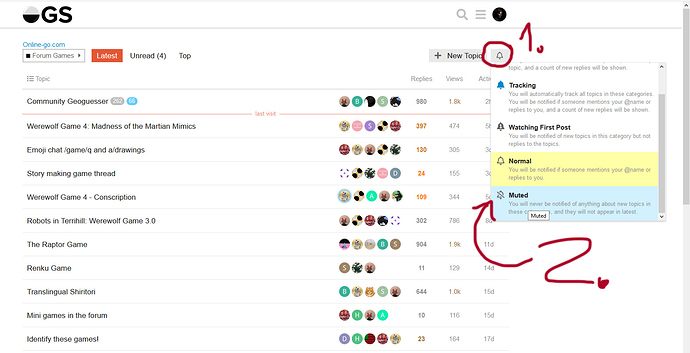 I am not thrilled about discussing every nonsense here either and urge anyone reading this to consider instead venting in general chat on the game site (for things that do not require being archived for long period of times), but then again if others find enjoyment in those topics, we have tools to ignore them and make ourselves comfortable, so each to his own, I guess

Wait: if I mute all noise I’ll lose my status!

Some of us agree with the gist of what you @ginger2008 say. I am not the only mod who is a bit unhappy about the recent drift toward general chit-chat in the Forums. I’m not speaking of off-topic threads in general, as they humanize our community when they are substantive. But there are some threads, Random chat and the various games, that by their nature encourage substance-free posts and the overshadowing of go itself. Muting is not really a solution, as it is like sweeping dust under the rug. Those threads, again by their nature, encourage by example the invasion of substance-free posts in other threads. They also tend to dominate the top of the list, which means that go topics get pushed down. Many people seem not to look very deeply into the list, so the consequence is that lots of threads are now being neglected. Requests for teaching games and for reviews, once very common here, have largely disappeared. I think it would have been better to place the other games in their own tab, but it is probably too late for that.

By the way, the first game here was the “guess the rank” game IIRC, which was explicitly go-related. It even had teaching value, IMHO, in getting us to think more specifically about the characteristics of game play at various levels.

P.S.–since someone is likely to raise the point, I freely admit to posting a number of substance-free posts myself. Usually these are because I want to praise something beyond a “like” and do it in a public way, rather than via a PM. The key here is self-restraint, self-regulation, without which the Forums will break down altogether.

Edit: the system failed to show this as a reply to ginger2008. I have adjusted the first line.