I played a game with someone and it ended up with the exact same score for both of us. The game was not set any decimal komi (I am not sure if it had any komi and lazy to count all the points). My opponent told me it was under New Zealand rules and I am not sure how to check it.

My questions are:
If there are what he called “New Zealand rules” is it counted as White’s win (I was black) when both of us got the exact same points at the end?
Does this website ever give players a draw in cases of games without decimal komi or okigo (games with handicaps)? If not, what is the rule to decide the winner when both of the players got the exact the same points?

? UPDATE To those who want the quick answer, without the conversations that followed below, here is a complete l…

I consider our game should be a draw following your description about New Zealand rules. My opponent has sent a message to a moderator so I hope they fix this if it’s a problem.

Plus… I didn’t even know there was such a thing as New Zealand rules lol, it was good to know more diversities in go games.

There are many more rulesets

Rules of Go at Sensei's Library

I think it is a known bug that games that should be draws are shown as “White wins by 0 points” or something like that.

There are rulesets (I think ING rules?) that use an integer komi but specify that one color always wins ties (effectively the same as using a non-integer komi), but NZ rules is not one of them. If komi is 0 then draw is a possible outcome.

I believe you’re talking about this game: 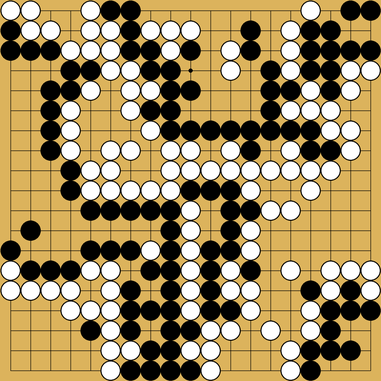 If the score was indeed equal for both players, the game should be a draw, which is indeed a bug in our server, where it does not account for draws.

However, this game was scored wrongly, as the seki in the middle is not marked for either player. Since black has 6 more stones in seki than white (and living stones are worth points under NZ rules), actually black is ahead by 6 points.

Also, there are three points of dame, and in area scoring filling these up gives points. If the number of dame is odd, a player should not pass and instead fill up one of the dame. When the number of dame is even, either player may pass (since the other cannot get ahead by filling up the dame). Therefore Black would even have gotten an extra point if Black filled up one of the dame before passing. That makes it Black + 7, like the AI suggested.

I read few time ago that Chinese fed has adopted the situational super ko, although it still to become popular between players.

Thx for the resumé