Can someone tell me why my opponent resigned early in following game. 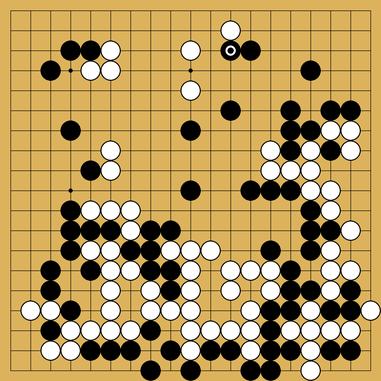 ? was clearly winning against ?.

It is an odd one for this DDK. The AI thinks that white was overwhelmingly ahead from early in the game, but as white I too would have been rather unhappy at that point.

The AI analysis of the last couple of moves shows that it thinks white can invade the left, wheras for me the left black territory appears impenetrable.

What is wrong with that game though, I see no player names, “Black wins by undefined”?

It is an odd one for this DDK. The AI thinks that white was overwhelmingly ahead from early in the game, but as white I too would have been rather unhappy at that point.

Isn’t it more likely that white decided the game was over and didn’t want to wait for the rest to play out?

I see no player names

Since it’s an uploaded sgf it’s possible this was either on OTB game or one played on another server.

Ah, that makes sense, I didn’t know it was uploaded

as white I too would have been rather unhappy at that point.

Could you elaborate? What is your score estimate?

To me, it looks like a balanced game at that point. My guess is that white just decided he/she had better things to do.

I think flovo once pointed that out to me - it happens when you import a game from IGS, because they use a non-standard capital letter somewhere in the sgf’s tags.

Game was played on pandanet. Title maybe ripped after upload. I was playing black and white resigned. At that point I thought game was balanced and black was a bit better, but AI thinks white is bit better. Maybe my opponent thought he was already winning and no point playing it out against weaker player like me.

Entire game AI was obsessed by move at C15, move never played suggested at least 50 times. I don’t understand that either. Maybe after C15 left black moyo is impenitrable, that is what AI thought.

@xoxox OGS uses Leela Zero for game analysis. LZ’s objective is to secure a win, not to find the move that gives the biggest advantage. So usually the analysis is only helpful for a balanced game.

Running a Leela Zero analysis on a handicap game doesn’t seem like a good idea to me, or at least it should come with a disclaimer. KataGo might be better for that.