the review tools seem to be glitching hard for me: 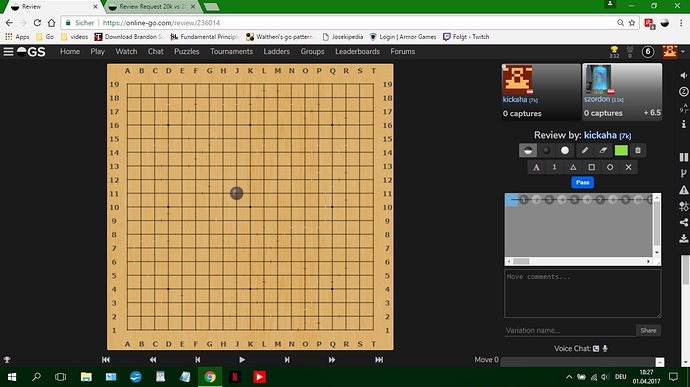 they (the strange lines) seem to be remnants of actual moves [EDIT: no they are not. the preview stone/cursor leaves them behind as i hover over the board… wtf :(… its also happening in games.], which makes me think this is also related to the review/analysis tools.

is this happening on my end? or can anyone else confirm?

I also have problems with review boards not loading (or suddenly becoming empty) as well as difficulty navigating move tree at times on ipad.

Just to confirm. I thought I’d lost a whole review at one point - I left my laptop sitting for a while and came back to it and it had all disappeared.

I went away from the page and reloaded and it came back, phew! Should be resolved by this commit.

Woo hoo. Because its committed, does that mean it’s released? Or we see it in a release some time later?

I see that my disappeared review is there in full now. Very promising

Woo hoo. Because its committed, does that mean it’s released? Or we see it in a release some time later?

A commit, or “revision”, is an individual change to a file (or set of files). It’s like when you save a file, except with Git, every time you save it creates a unique ID (a.k.a. the “SHA” or “hash”) that allows you to keep record of what changes were made when and by who. Commits usually contain a commit message which is a brief description of what changes were made.
https://help.github.com/articles/github-glossary/

I think it is already implemented, there was a small update yesterday… but im not sure. it seems like its working though!

For your information, you can always see the exact point where the UI is on the server side. If you go to the about page, you’ll see both the UI and the API current versions. For example, as of now, I see this:

The last string on the UI version (gde60869 in this case) are the last characters of the corresponding commit hash. If you go to the Github project commits page you’ll be able to search for that specific commit. In this case, it’s completely up to date: