Hi, I was wondering if anyone had a bit of free time to help me review this game i played. I was very unhappy with the opening but it seemed like i had opportunities in the midgame that i just kind of blew up. I was pretty low on time for at least the last 50 moves so no need to pay so much attention to these.
https://online-go.com/review/334254 here is the game with my first commentaries and qustions on this game 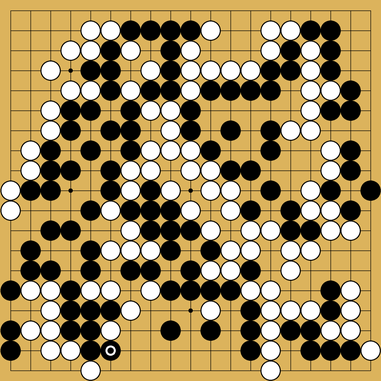 Biggest takeaway: don’t panic. You went into emergency reduction mode well before it was necessary and ended up giving your opponent a huge territory in the bottom left. I think you would’ve been fine if you just grew your top right in a manner which defended the cut, and then played some normal reduction moves to keep their territory low. Had you consolidated that entire top right bit, you were looking at about 40 points of profit. for comparison, if your opponent got the entire bottom in 3rd line territory aside from the corner you took, that’d have been 28 points.

Thank you very much. My thinking was that with the huge wall on the left and the corner already enclosed it was more than just the third line that i was risking. But I guess you are right.

One way to think about things would be to ask how bad it would be to give your opponent everything they’re asking for. Would you be able to get enough compensation? Imagine you just built a wall of stones on the 5th line, giving your opponent 4th line territory across most of the bottom. 4th line territory would bump them up to 42 points on the bottom, which would more or less equal your big top right territory. All you’d need from your wall, then would be to counteract the rest of your opponent’s territory, which is only about 10 points, 16 if we give them a decent amount from their top left-ish group.

Of course, things are never that easy, but it’s a useful way of putting into perspective how much of a threat that bottom region really is, and whether or not you need to immediately invade/reduce, or if it makes more sense just to keep playing big moves that expand what you’re staking out.

Thanks a lot for your review