I was hoping to get a review or two on this won game. (I know that a lot of people dislike doing reviews on won games) 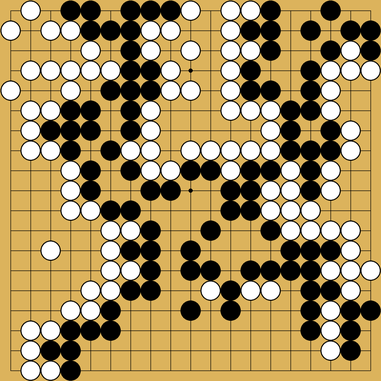 Edit: eternally might be a bit of a stretch, but I’ll be grateful nonetheless

W10 seems a bit passive – we have one pro game for this position, where White played D10 (http://ps.waltheri.net/database/game/77647/). I generally find that the weaker you are the harder it is to use the split.

W12 is a semi-joseki popular in the 19th century. It’s said to be a bit worse for White locally if Black invades at C3 (see Waltheri for vars.) Then again, it’s a little closer to the undefended wall than the normal response so that could be relevant.

B17: I think the “honte” move is E2 to make a more defined eyeshape.

B19 is arguably a little slow since Black has a forcing move at B2 for more eyespace, and can still jump into the centre.

It’s hard to say how best to respond to White’s 3-3 invasion of the lower right. I think there are a number of different reasonable strategies.

W38 is overplay. I would recommend tenuki’ing either to invade trhe left side (eg. D10) , build the bottom side (eg. E6), or strengthen the corner with G17.

B63 is probably a little too close – see previous comment.

At B73 you have to first atari at B13 to prevent White connecting.

The endgame is not that interesting to me.

Thank you so much. Your comments here and on gokibitz always provide such valuable insights. I wanted to put this one up on gokibitz, but it seems to be having issues today

i mostly copied what @bugcat said into a review

I appreciate you both!