Hello fine folks out there,

here is an awesome game (in my view), which I played recently here on OGS.

My opponent was a SDK 4kyu, so much stronger than me. Regardless to the rank, I thought the game went fine (Especially the fuseki and joseki part).

BUT from move 15 (in my opinion) the (probably) too agreessive play by black begun ( maybe because of high pincer patter on bottom by black??!!).

Anyway I think white got out with move 40. After couple of moves, I tried to seal in white in bottom left corner, which ended up messy (Maybe would appreciate short comment, if b can manage to kill w here??!!!)

After failing I tried to build a framework, which I started with move 67. Unfortunately it went pretty heavy and b got reduced trumendously!!(AI says, instead of move 67, push group J9) 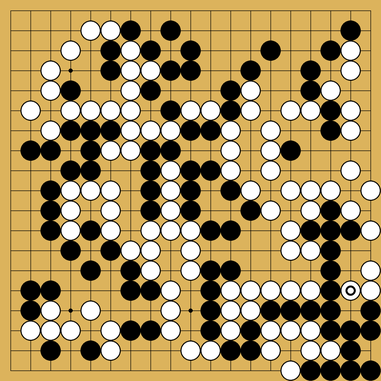 Sorry for the long text, I have basically three questions:

BIG BIG THANKS to everyone reviewing!!!

I think the question should when to play a pincer instead…
When you pincer from the corner vs an approach, you either have stones on the other side of the board, so you’re pincering + expanding at the same time
or just plain out preventing opponent expanding and getting too much
or maybe just plain out want fights or what not

this is a bit of harder question to answer
I personally would go for fights in my favor, meaning I would attack opponent with the help of nearby group/stones. You can imagine this by I have 2 friends here, so we are 3 guys ganging on you little fellow, who’s going to win? Usually us 3 are going to win unless you know kungfu and beats us up (kongfu = godlike reading ability in go)

When opponent got my on 2 sides, I try to run, when he got me on surrounded, i just try to make life

How to build a MOJO, without opponent Invade easily?

The purpose of a “MOYO” (not mojo), is to ask opponent to invade you and you attack and profit from the fight.
Usually we don’t attack to kill, we just chase and chase, in the end, opponent gain 0 territory, while you get lots of territory+influence from chasing him like a madman

When the fight helps you win globally (even if you lose the local fight);
– or –
when you have no choice (if you don’t fight, you get a bad result for certain).

Everything depends on the unique board.

When X helps you win globally (even if you lose locally);
– or –
when you have no choice (if you don’t do X, you get a bad result for certain).

Everything depends on the unique board.

Hello, since others have made detailed review, I will only give comment:

In the particular game and also in other game I checked in your history, you mostly lose a winning game, one of them even by suicide. You seem to like moyo style play and you do manage to build some impressive moyo. But it’s just too easy to live inside your moyo, your wall looks impressive but the opponent just touch it a bit and it’d crumble.

You should buy a tsumego book appropriate for your level and read during lunchtime or maybe solve one or 2 problems on the bus/train each day.

You can safely forget it for now (really!) Look at this statistic:

60707 occurrences and 30 continuations have been found in 82115 professional games.


You can see that 2 spaces high pincer ranked 5 in popularity, and played in only 8% of pro’s games.

What it mean is that pincer is only used in special situations.

When you think you will benefit from the fight:

How do you know that? By reading (back to the “solve puzzle on bus” talk above)

Kill them when they invade.

If you can’t kill them (even after review), remember the weak point (where they invaded) and next time build another moyo without that weakness.

Oh and, don’t play blitz. Play games where you can invest time into thinking. Thinking deeply will help you improve.