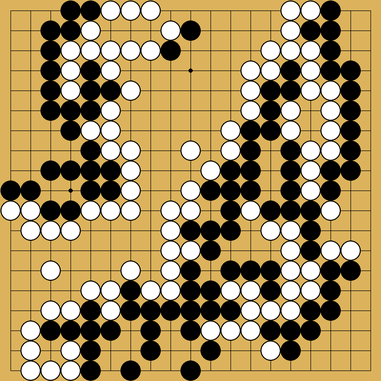 So, will there be a Summer revival in the games reviews section?

I offer myself as tribute.

I’ve left a few comments. The lack of liberties after the connection at J1 is annoying, but I think the deciding mistakes happened before that.

Another thing worth saying: at move 18 you played an extension to help settle your white group: 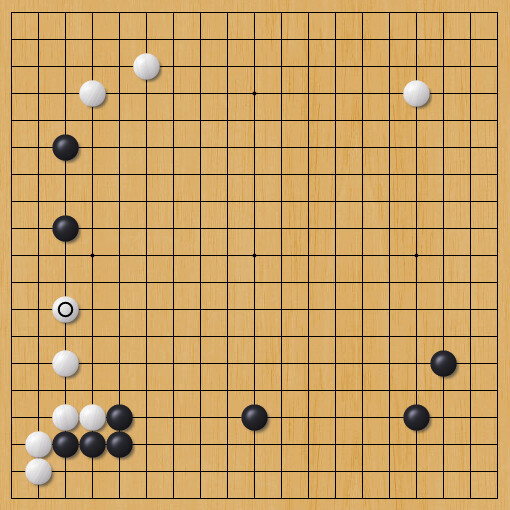 However, the black group can easily get rid of the pressure by sliding into the corner: 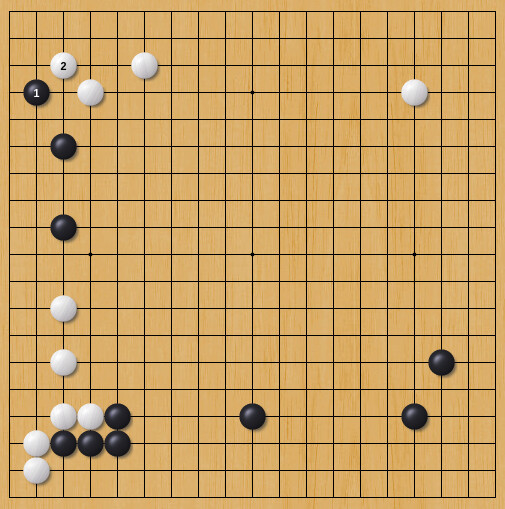 There is a nice trick very useful in these situations. If you’re about to put pressure on a small group like this black group by taking its extension, you can first “kick” the stone which is close to the corner, to remove access to the corner. The kick is always sente; then you can play the move you wanted to take the extension: 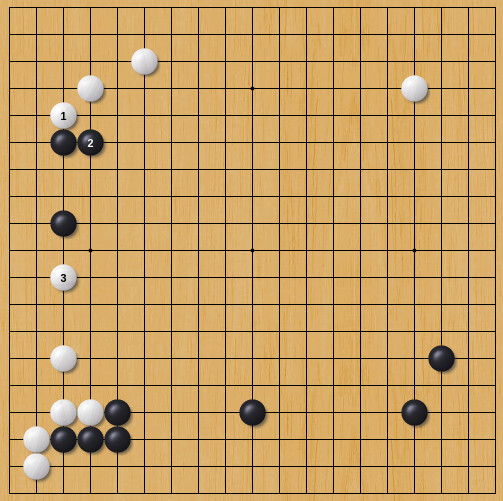 Another word for this kick is “kosumi-tsuke”.

If your opponent tries to pretend that the kick isn’t sente, the punishment will be severe: 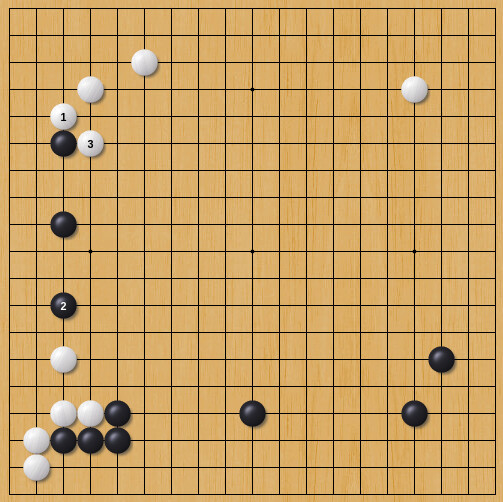 I want to add that, in general, a good idea to get into a good result is to try to maintain good shape and that alone, is enough to be an enormous improvement at this stage of learning.
Two main examples from this game: 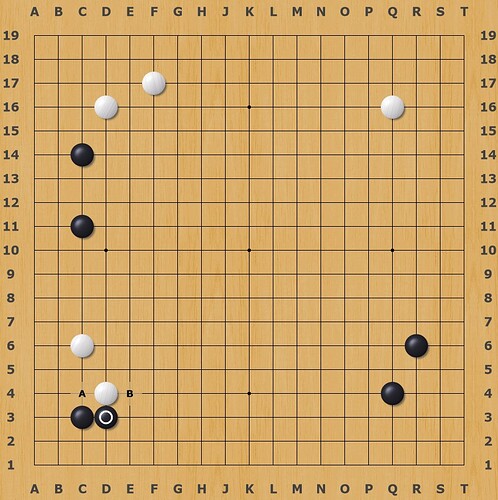 It is White’s turn, A is what was played by White and Black played B and hit those stones on the head, which is a notorious bad shape. 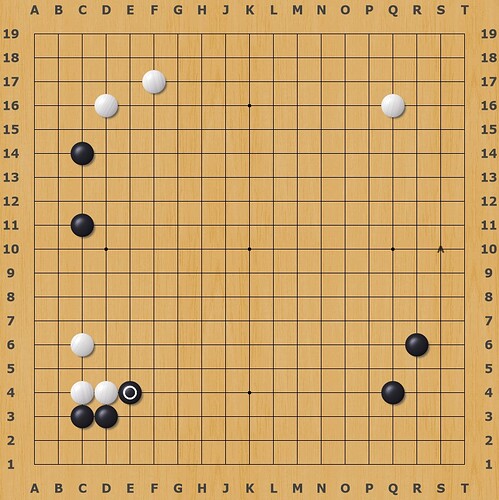 From this image Black is achieving two things at the same time, a) pressuring that small White group into making small moves and b) gaining influence on the bottom-center that goes along with his corner on the bottom right. Indeed in the game, a few moves after, Black gets a huge framework out of all this which White has to invade, which will lead us to the next point.

On the other hand, maintaining good shape, even in the case of a non-aggressive sequence involving any hane by White, could easily lead to this: 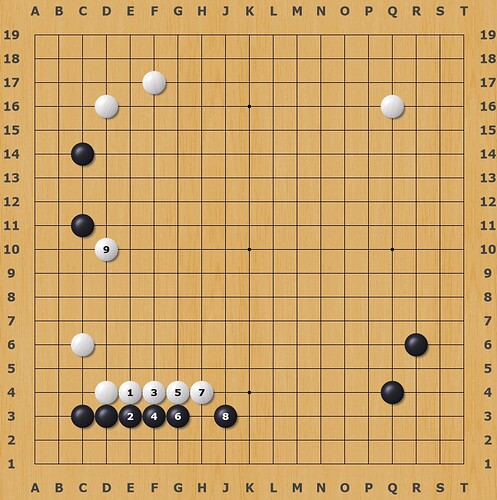 Which has the following advantages for White:
a) Black pushing/extending from behind (which is a bad shape for Black) and now
b) White is flattening the bottom center which Black wanted to turn into points
c) Creates a big wall for White which can be used to attack those two Black stones while White is now the one building the framework.

All that just by simply maintaining a good shape

On to the next point:
Black has gotten a huge framework and White has invaded. Please note that the closest White stones marked with triangles are very far away, so White cannot connect to any safe groups and has to survive locally. 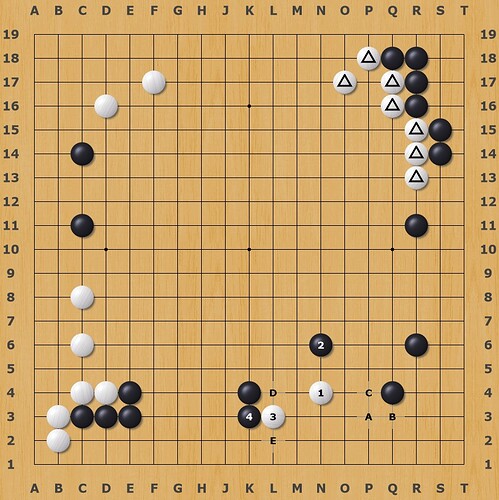 Move 3 is along the lines of “let’s get good shape and make a base” but once Black responds with move 4 (the iron pillar - good shape for Black) that stone is very weak and needs help.

Playing D would result with Black hitting the stones on the head again (bad shape, but sometimes it is needed to survive and it has to be done) and playing E would expand the base a bit, but it is currently a slow move.

The overall shape that we have in mind is getting a base and for this we need to expand on left and right initially, so we can ignore the stone at 3 for the moment and try to expand on the right with A, B or C - depending on how confident we are on a fight. 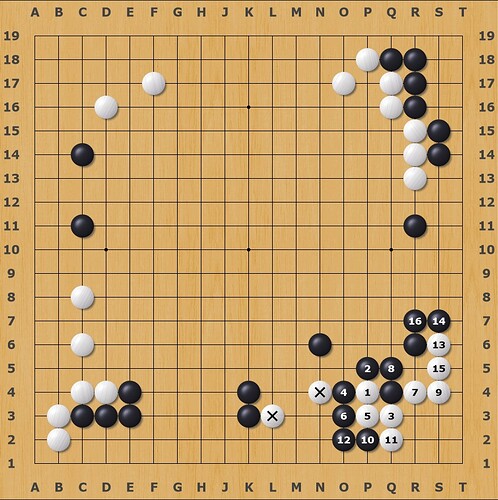 One such result can be seen here, where White can abandon those two stones (which still have a lot of aji to threaten reductions) and slide into the corner.
However, the main shape problem in this instance was this where White is practically playing a Tiger’s mouth that already has a peep: 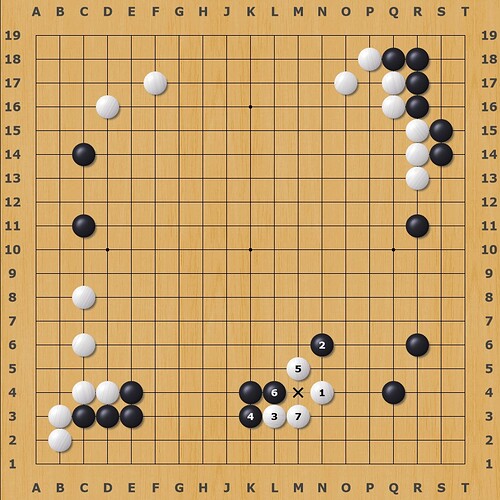 Move 5 means “I abandon the idea of a base and I am trying to run out”, however after Black plays move 6, White flinches and wants to save everything and extends. This creates at X a shape where on every other instance would have been called a peep and White would probably connect, but in this case Black gets this for free because it was White’s turn that created the bad shape.

Again, simply retaining a good shape would have generated a much safer and better result: 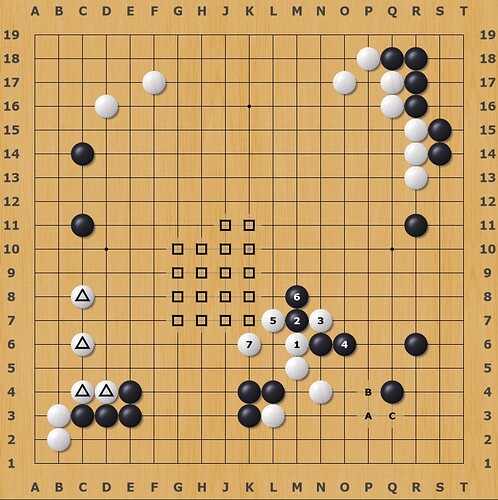 In this case:
a) White still has reducing or threatening moves at A, B or C, so the invasion is still not over.
b) White now is expanding in the center, has more room for making eyes
c) The botton Black group is pressured from above and Black cannot expand both the bottom and the right side
d) Suddenly White’s closest stones are much much closer.