could someone maybe have a look at this game? I only lost because of a terrible mistake at the end (it’s almost too shameful to put this game here because of that.) But regardless of that this was a game where I didn’t know how to respond to the, in my opinion, very aggressive and invasive moves from my opponent. It’s a style of play I’m not used to and would like to have an idea how to respond properly and not get the feeling I’m on the run all the time. (If that’s possible.)

Accidentally did the review on my test account… don’t tell anyone. D: 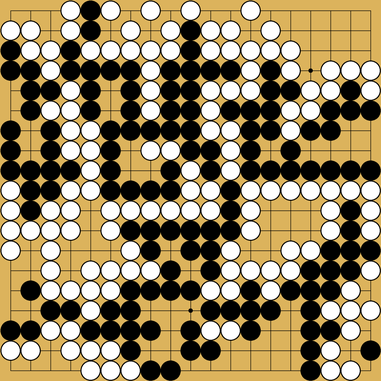 Are you sure you’re 14k? Some very intricate reading involved there… Especially lower left towards the end of the game…try to find out why b still cannot kill white’s dragon after W D5…

Hi, thanks a lot for the review!

For the killing sequence after move 54: it’s more like one killing move I didn’t see I guess. B at C2 and the group is dead, right? W might respond at D2, B C1 and white has nowhere to go.

White’s move at 58 was not a misclick by the way. I asked about it because it felt really weird to me. The response was: " Its a surprisingly strong position. playing on any of its 3 liberties is either suicidal or limited. Makes for a nice extension of control without overextending."
Is there anything to it?

As for blocking in the wrong direction at 61: I did learn “block on the wider side”, so I kinda figured with one extension on one side and none on the other, the side with nothing was definitely wider.

But yea, it didn’t work out all that well.

It’s very interesting to see that I actually forced my opponent to ruin my shape. I’ll think some more on the direction of play in the future.

For not being able to kill the dragon: I’m not sure if it’s the correct answer, but I feel that after W D5 kind of everything went wrong for black. I wasn’t able to connect anymore, not giving me enough space to make two eyes in the bottom group. W being able to kill there gave it enough room to save his group instead. If W couldn’t capture/make room at the bottom he would have lost the capturing race (that if I’d have still been able to block W from getting out at the right side, so it might’ve only worked out if that stone was in place earlier.)

About my rank: I take that as a big compliment!

But I do feel it’s accurate at the moment. I was around 22k only a month ago and I’m only playing on OGS. It’s kind of going off the charts, ha!

Maybe it’ll continue to go up a bit more, but not sure. We’ll see where it ends up.

Glad you liked it. With respect to W58, I think he was joking. It doesn’t do anything. Maybe someone beat him using it and since he didn’t know what to do about it he thought it had some merit, but… it doesn’t.

Good luck with your next games!