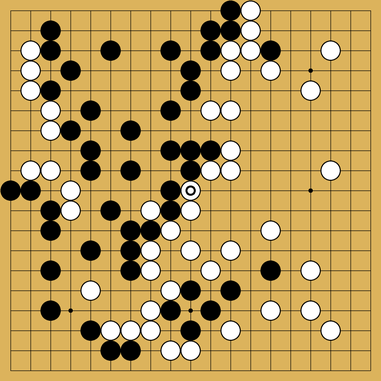 I did better than expected, but clearly need more of an idea of general play. I don’t know fuseki, joseki… much of anything.

I’ve played a few 19x19 games, but this was my first rated live 19x19. My rating is a little inflated due to some 9x9 ladder timeouts, so I suspect I’ll level out closer to 20k after a few more rated games.

I posted a few comments and variations in the original game, peruse at your leisure. o/

First off, I think you played the opening fairly well, especially for your first 19x19! You didn’t get bogged down (that much) in local stuff, played fairly big moves, and focused on developing, rather than getting into pointless fights.

I think your biggest weakness, which showed up later in the game, is that you let your opponent get away with too much. Once you had a basic framework laid out, you stopped trying to expand on it and focused on stopping your opponent from invading it at all costs. In exchange, your opponent got the rest of the board. Try to look for moves that develop what you’ve got even more, while attacking your opponent.