I just finished an even game, which ended similar to a few of my last games. As such, I know I must be making a direction of play mistake that leads my opponent to getting a much larger territory than me. Reviewing it all, I’m having trouble deciding where exactly I go wrong. I’m mainly concerned about the opening, up until about the middle game (where black ends up getting a relatively large wall in the center of the board).

I’ve spent the last few weeks trying to focus on the fundamentals - corners, sides, center, large moves VS urgent moves, and strong shape in general. If you see anything fundamentally wrong with what I do in this game, please call it out too.

Link to the game

i made one on opening

Hello @lswest,
I threw together some quick ideas after one look at the game: https://online-go.com/review/378385

It is no way an in-depth review, so if anyone wants to do something more detailed, feel free

but I think it was a good example to find some potential core problems.

You talked about big moves, yet it seemed to me in your game you still wasted tons of moves on very small things. I tried to point out those places.

Just because a move is forcing or sente does NOT make it good. Again I tried to point out several instances where you played a move that was sente but brought you almost none or literally none profit, while your opponent got to solidify a lot of points, removed aji from his position or otherwise profited. It may feel good playing those moves, because one can feel like he/she is “in control” of the game, but what is the point of forcing a deal your opponent is getting the better end of…

Your play seems very passive. Building for yourself without bothering the other player. This may work against weaker players if you are just building large enough moyo, but will usually fail against stronger players, especially if you are playing white. Black often has the better opportunity to build something bigger (if you do not contest him/her) as he/she had the first move.

Ultimatelly if you understood all the points above the problem may lie in your ability to estimate the board. It was clear quite soon that black’s moyo is much bigger than white’s, yet you seemed to not try and reduce/invade. I am not telling you to actually count the game, but every now and then, try to estimate what is bigger than what, and base your next move on that estimate. If you are behind you have to try and attack more actively.

Hi @AdamR - Thanks for the review! That is indeed an excellent review for what I myself am feeling in my games. Some of the reason why I played the smaller moves (while knowing they were smaller) was simply because I wasn’t sure where best to start, and thought perhaps a stronger position might help me decide where to go from there.

I definitely agree that I was pretty passive when building things in the center, but at that point I just wasn’t sure the best way to attack. Your suggestion (especially about the bottom left corner) was very helpful. I don’t suppose you could offer me a couple of suggestions for my move at 32? I had sente, but I just wasn’t sure how to begin a worthwhile reduction or attack without just creating a weak group or strengthening black.

As for your comments about my estimation - I was absolutely certain black was ahead before even move 30. I only played the weird shoulder hit on the 3-4 towards the end of the game, because I could not for the life of me read out whether or not it would work, so it was more of a last ditch effort than a plan.

In any case, I think I should focus my study on invasions and reductions a bit, to get some more experience/ideas as to how to prevent these massive moyos.

@txwolf - thanks to you too. I know the move black played at P18 (move 15) wasn’t correct according to the joseki (he should have extended to S14), but I wasn’t sure how best to capitalize on it. I run into this situation a lot, where I know my opponent’s move is slow or bad, but have trouble deciding the best approach to take advantage of it. Any suggestions or a checklist of ideas I should run through to make the right decision? I debated about letting him crawl on the second line, but wasn’t sure if that was better or not.

Read this. Your sense is good, but concept is not clear.

could offer me a couple of suggestions for my move at 32?

Sure, my personal move would probably be around G5, not getting surrounded and possibly getting an attack on the two black stones. But even some probe around C12 or anywhere near tengen would be reasonable in my opinion. Does not really matter too much in this one particular instance, it will always be different and others would surely play elsewhere, don’t be too afraid to try things even if you can’t quite read them out. Having one weakish group is not the end of the world, if you have strength and potential elsewhere.

That said, I think your move 32 was still fine! (maybe it was not clear from my review) If your style is safety first, that is completely fair. You might even still be up on potential win at that point, but you have to have a plan to attack/reduce in time. The game did not really look bad for you (in my opinion) until the 43 to 46 exchange. Those were just free solid points for black.

And you have to read books. here is my list: if you read the first the first one, you would know a two line crawl is a big disadvantage. Then you would easily block the upper corner from top side instead of bottom.

In the beginning: the opening in the game of go.
opening theory made easy.
the elementary go series:
tesuji
attack and defense
38 basic joseki

Thanks to both of you (again).

@AdamR - it’s a fair point. I’m still more than happy to hear other people’s opinions on moves, because I may still learn something.

@txwolf - that’s a good list of books. I technically want to get and read attack and defense. Is that OK, or was there a specific order to your list?

i go by the flow of the game, opening first, attack and defense … in my case, i know a little bit of joseki and tesuji.

imagine playing a game, i don’t want to lose at the beginning. if i suck later, i will worry about it later.

Fair enough. I’ll read the Sensei’s article, and finish Kageyama’s Lessons in the Fundamentals of Go, then see how it impacts my game, then make a decision on what book to get based on that. Thanks for the input!

Everyone already figured out everything, but I’m going to say what I think nevertheless. Looking at this and your other games I don’t think that opening is your weakness. In this game you outplayed the opponent in the beginning. You boxed in upper-right. M3-P3 exchange was good. With N10 the idea is good, maybe not here, but good.

Generally I think you lose because of bad shapes and bad fighting.

This one leaves nasty peep at the cut: 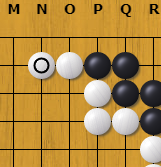 Running with an empty triangle instead of jumping: 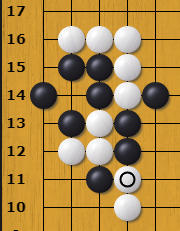 Focus on that. Shapes and simplest reading. You don’t necessarily have to read books, books are not for everyone. But you need some sources of good ideas, like lectures or commentated games, whatever works best for you.

I would just add my 2 cents: look for “dwyrin invasion” on YouTube. In his Basic series Dwyrin has a simple yet powerful thought about invasions: if you need to invade you did something wrong before.

Working for balance in the opening could avoid the need to invade. I liked very much his demonstration about that

Thanks for that. I know the video you’re talking about, and I generally agree with his sentiment. Quite a few of my games actually work out that way, but sometimes it’s just not in the cards (at least with my reading/shape the way it is), so I do still need to work on my fighting/reading/shape, like @S_Alexander suggested.