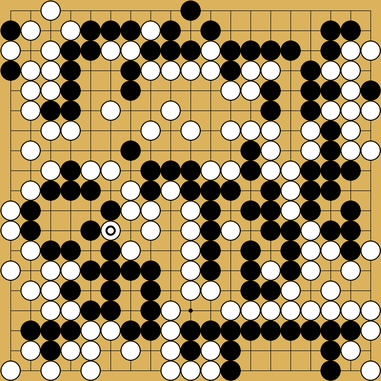 Somewhere in all that fighting I threw away my advantage. I’d be very thankful for input!

On a different note, I never came around to installing a strong AI on my own computer. Last time I tried to install Leelazero, I didn’t understand the readme and I stopped trying

Anybody have a link to a simple download of Katago or the sorts?

Looks like very much a DDK game, fighting from beginning to the end. lol

Please give some constructive critique where I should have played differently and / or what I should work on to improve.

//Edit: In case you think this is a joke review request; It is not. I really tried my best that game, and I would like to learn from my mistakes.

Obviously not many people are qualified to review your game. I won’t attempt to do that but I did run Katago and I find this tesuji quite nice. Not sure I understand every variation though. 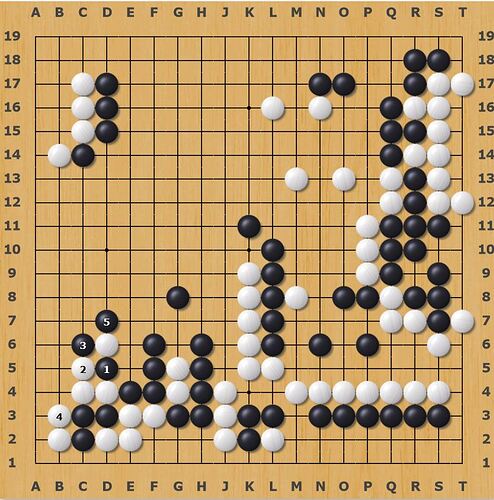 that was a joke. not many 4d here.

sorry if it offends you. i did see an empty triangle at the opening, that’s pretty much i can understand.

It’s fine, don’t worry about it. Losing games is always a bit difficult for me, especially when I try doing my best and am emotionally invested. So don’t sweat it.

Obviously not many people are qualified to review your game.

It’s lonely at the top.

I don’t know if this is helpful, since obviously it’s not about moves, techniques and such:

I think the unexpected move 4 threw you off a bit disproportionately. I got the impression that you had an eye there even when contemplating urgent moves elsewhere; maybe it was just a bad day (since you mentioned you were tired), I can’t judge so high in the ranks. You couldn’t shake the surprise, somewhat.

Even if it’s a God move, once it’s on the goban, take it for granted and keep going. It is what it is.

Obviously not many people are qualified to review your game

Anybody have a link to a simple download of Katago or the sorts?

I have LizGoban. It’s quite intuitive and has Leela zero as well as Katago. I only used it to review games and it isn’t very different from OGS AI analysis.
Main feature for me: stone faces!

KataGo wants to touch the D6 stone all the time (with the D5 wedge or the C6 attachment or the D7 attachment) from around move 23. I suppose it wants to get some forcing moves and overconcentrate white’s strong group.

Connecting at D10 on move 127 seems to be a fairly big mistake (-3.5 points). I suppose it’s too slow.
Black needs to take care of his center group first by jumping out to H13: 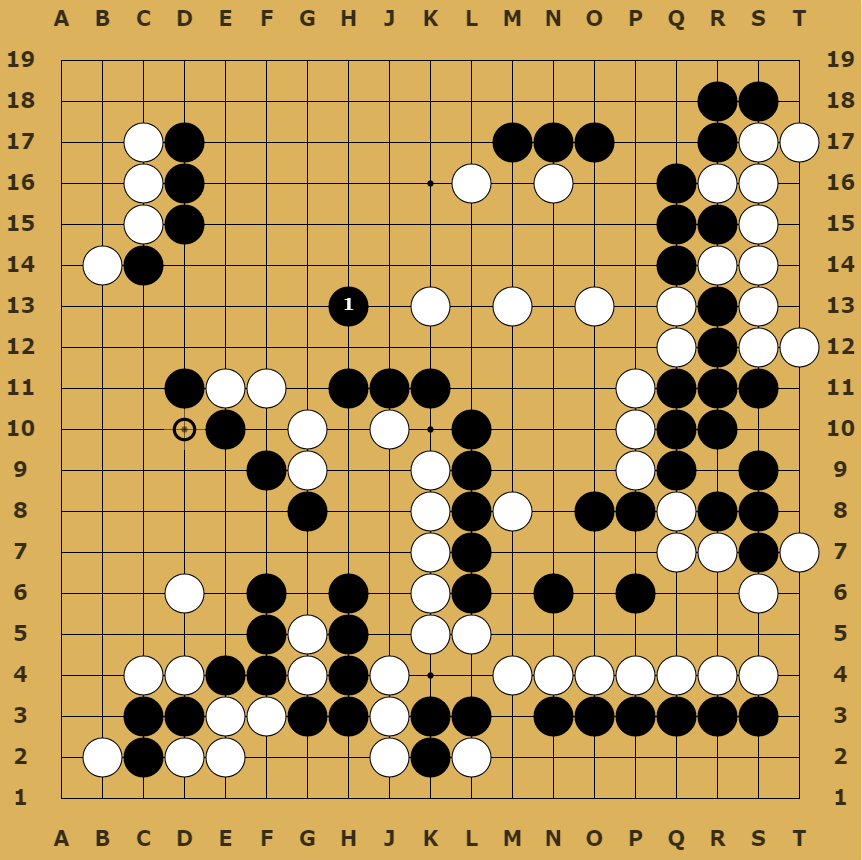 image862×860 45.6 KB
The game move allows white to seal that group in and take the initiative.

Move 131 is also slow according to KataGo (-4.5 points). Living like this would have been better: 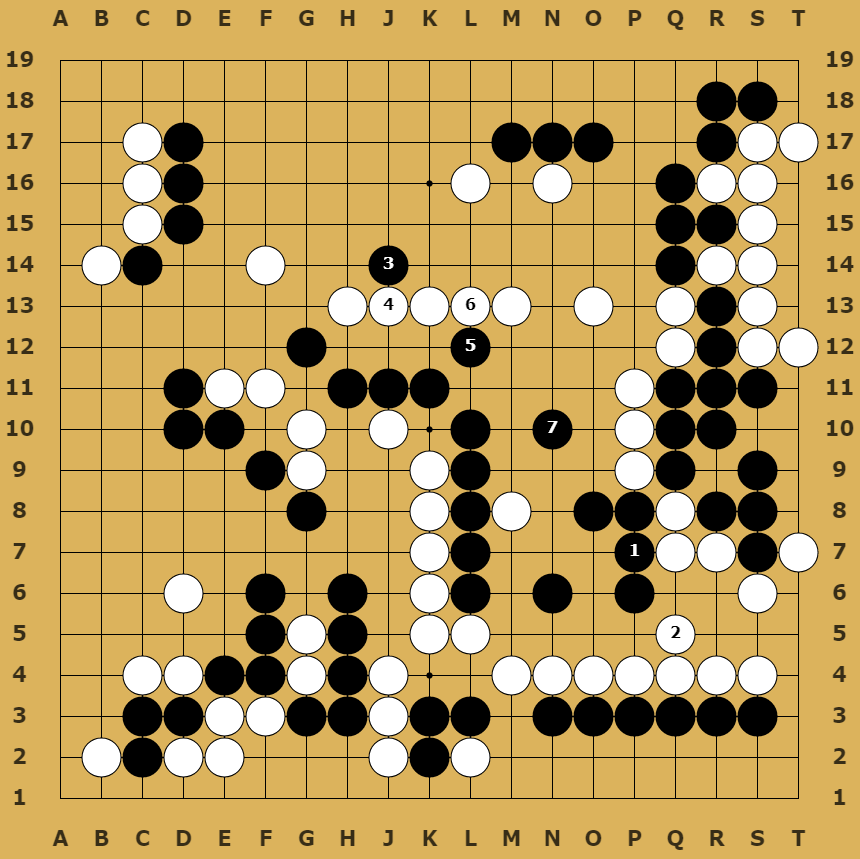 Move 147 wasn’t neccessary according to KataGo, so it is again slow (-9 points, losing the lead). KataGo would tenuki.

I agree, that definetely startled me. I should not have used so much time in the first corner fight.

As a general comment, I’d say your basic haengma is ok and you are making sensible shapes, but you are lacking when a more finessed haengma is needed. This is particularly relevant when your opponent stops overplaying with moves where the simple answer is good for you, but starts playing better moves which need better moves from you to keep level. When you’ve found a move that achieves the strategic goal you want, don’t just play it but think “is there another move that does this even better, more efficiently, better order, probe first?” Review running fighting of pro games, first thinking of what you’d play and then look what they did and compare. You sometimes need to leave a weakness to be efficient.

Thank you for your comment Uberdude. I believe that I am not incapable of finding sophisticated finesse sequences, but only given ample time. Under time pressure I tend to butcher my games - either by misreading or by playing slack moves, and so I unfortunately lack tactical awareness. I will try and work on it.

Gia and Uberdude said very well and I think two issues they mentioned, time management and loose moves in the second half of the game, reflect that currently you are less of a competitor. IMO you are more on the mathematician side.

If you want to become competitively stronger, I think it’s helpful to watch pro’s videos on them playing same level players. Losing more emotionally devoted games can help, too, but it’s painful.

currently you are less of a competitor. IMO you are more on the mathematician side.

I am not sure what you mean by this.

Yea I should’ve explained more, since it’s my personal way of characterizing players.

So a pure competitor only cares about winning a game. They can use anything (exploiting oppo’s time, make use of oppo’s mental and style weakness) to achieve that goal. A mathematician focuses on the game itself. For a mathematician the game is solving a math question: given a position, find the best move. There might be a third type of players, the artists, who have their own aesthetics.

So a pure competitor only cares about winning a game. They can use anything (exploiting oppo’s time, make use of oppo’s mental and style weakness) to achieve that goal.

I’m sorry but this sounds extremely disturbing to me. If this is what it takes to be good at go then I don’t want to be good.

I said a pure competitor. In reality few people are so extreme. And competitor and mathematician don’t really conflict. You could be both.

Thank you for giving me advise terrific but I will not try to exploit my opponents mental weakness.