would appriciate an overall review about this game:

(Topic(s) could be: → How to deal with invasion in Sanrensai
→ General midgame strategy, defend a potenial in the middle
→ Endgame 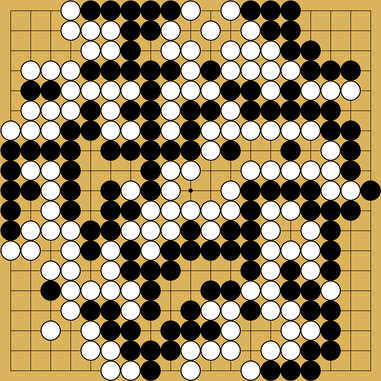 Thanks a lot to all.

Good luck and have fun =)

problem is - with such rank difference with your opponent, its doesn’t matter what you do, you would lose.

and when you are really behind, existence of endgame just doesn’t make sense

(Topic(s) could be: → How to deal with invasion in Sanrensai
→ General midgame strategy, defend a potenial in the middle
→ Endgame

Sanrensai is really something if one wants to play, one needs to study before playing.

For example, black move 11. It has to be on 4th line at k4 instead of k3. Otherwise, it contradicts with Sanrensai’s initial intent.

Sanrensai probably requires more fundamental skills to execute: for example, you build a big moyo, it very likely force deep invasion, that would requires very good reading to decide to kill or do something else. So nothing wrong to experience to get a sense, but my suggestion is not to be too serious. Then when you try this to someone way stronger, it is almost guaranteed with a bad outcome/experience. Don’t worry about it.

Endgame is one topic one can learn from a book very well, because it can be calculated well, probably the only thing in Go that can be valued clearly.

can be calculated well

but endgame of equal game is very different
when opponent is ahead, they can just make small stupid simple moves on purpose - so nothing even hypothetically breaks

but endgame of equal game is very different
when opponent is ahead, they can just make small stupid simple moves on purpose - so nothing even hypothetically breaks

True, but if one insists to play on, there is still a good vs bad sequence to play. For example, I’ve seen too many DDK fighting the center which is always very small in natural. The center visually appears to be big, which causes the common mistake.

Fighting is the wrong word chosen.

Ok, let me try some suggestions, but take it as a grand of salt only.

This move, why not p3 to be consistent to go outside? 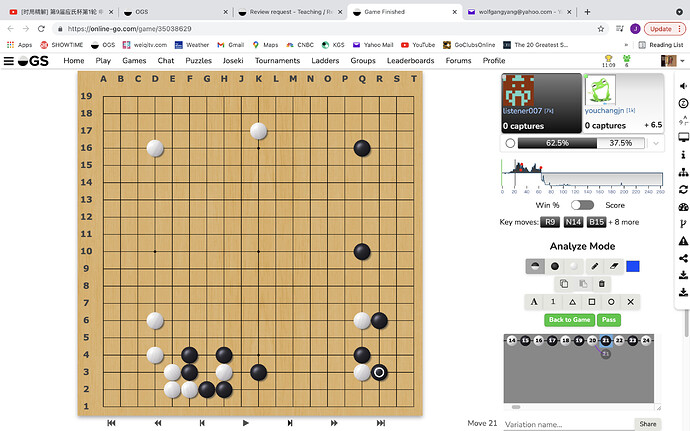 So the basic idea of Sanrensai is to build moyo, the downside is it gives up territory earlier, how does one compensate the loss of territory? Use moyo to pressure opponent’s stone to gain back territory.

So in this black move, the four X white stones are weak. Black should attack them. Even if not directly at this point, what is the black doing at C5? Black is going inside again.

What is so interesting though, AI thinks black is 85% winning. I can’t argue with AI, but that’s my point of not to play this opening, too difficult to understand. Though one guess would be the four white weak stones. 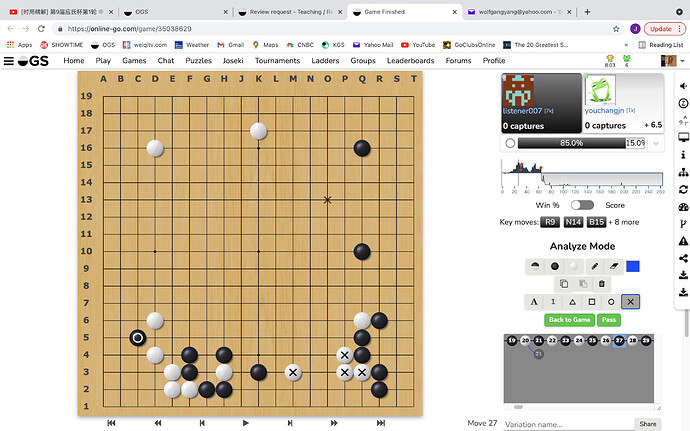 Three white groups not live, probably why black is 80+% winrate:

Why is white 90+ winrate here? One reason I see is black never attacks any of the three groups, instead just let them connect.

So, the trick here is not anything to do with sanrensai. It is the fundamentals, when to attack, what to attack, why attack … Don’t fancy sanrensai, chinese opening etc etc …

At this point, you should also look at d5, d7. what did those two black moves do? nothing.

General midgame strategy, defend a potenial in the middle

Playing a san-ren-sei opening is no guarantee to get a great potential in the middle.
Checking the middle game from around move 42, I don’t see much potential for a large black territory in the center. This just looks like a calm territorial position to me with not much potential for a big center for either color (on the right black has corner+side potential, but not much center potential): 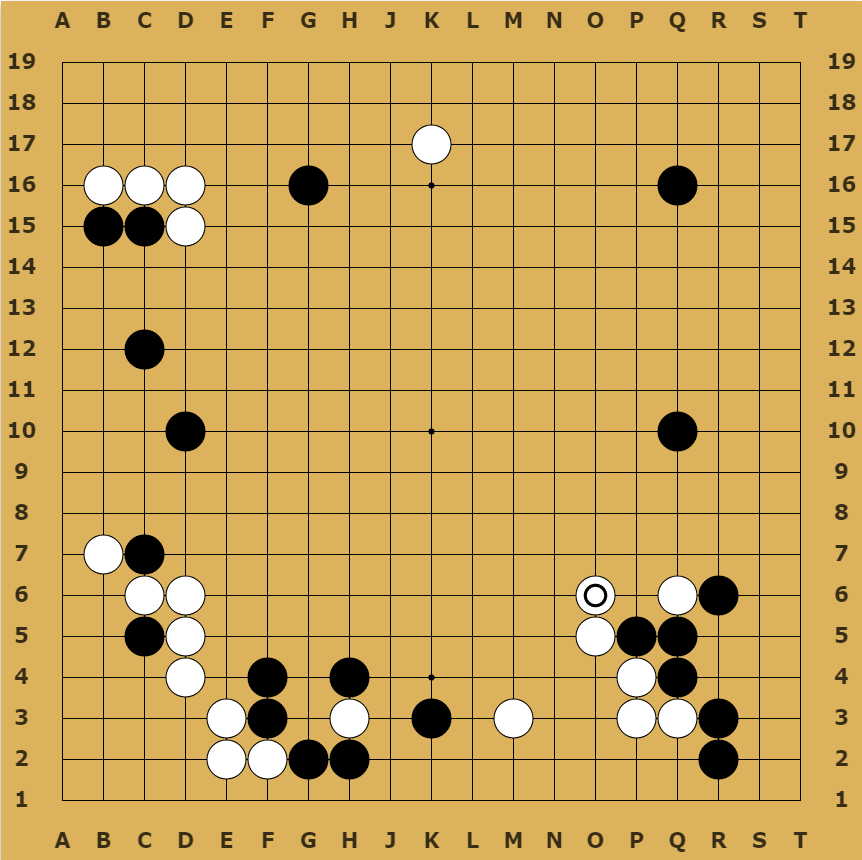 Later on (move 83-109) black does try to build some territory in the center-left, but it’s not enough as white can easily reduce it: 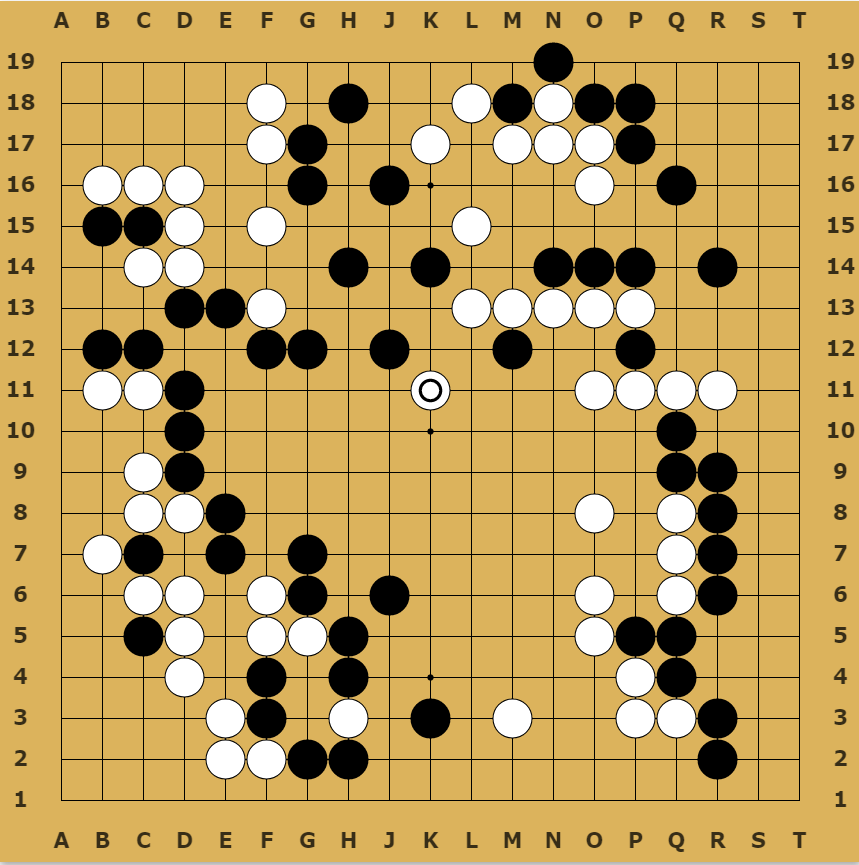 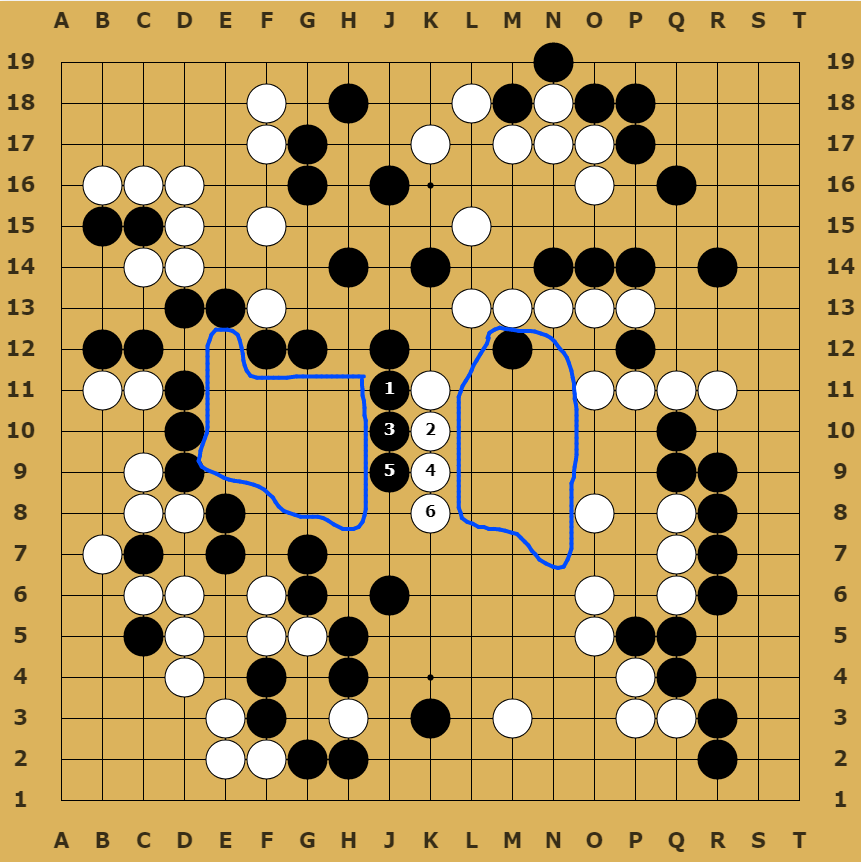 image861×862 55 KB
This kind of thing is generally the reason that makes it hard to profit from the center. Usually it turns out that both players get a similar amount of profit in the center, making the center equivalent to mostly a neutral area, as it turns out in this game (both colors get only a few points in the center): 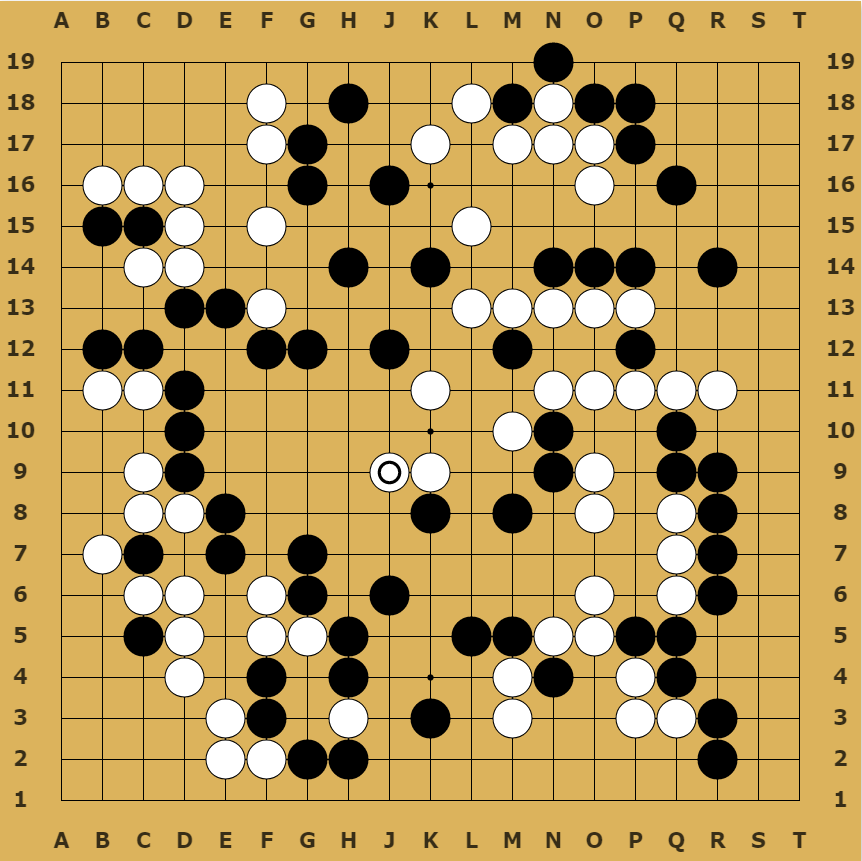 image862×861 47.5 KB
And the game will be decided by the territories in the corners and sides (and white has a fairly safe 10-15 point lead there, including komi).

Edit: When checking the AI review, please use the score metric instead of the win% metric. Win% is much less meaningful for amateur players. I wish OGS would just remove the win% option.

Why use this graph …

… when you can use this much more informative graph?

True, would probably be the better chose to go with. Push your opponent to your strength.