For some reason, the Dan Challenge incentivized me to start playing live AFTER the fact

Questions:
-I see AI doing the “HEY!!! HERE!!!” with Q15 and S5 for both B and W, I guess those moves secure the corner?
-It was a lost game, but was there a fight that I could have won for some bite in W territory?
-Also, I don’t like how I lost the A5 and O13 areas early on, but I can’t pinpoint when.

(I’ve hidden ranks, but I peaked after the fact, my opponent was 14k, I should have expected a beating 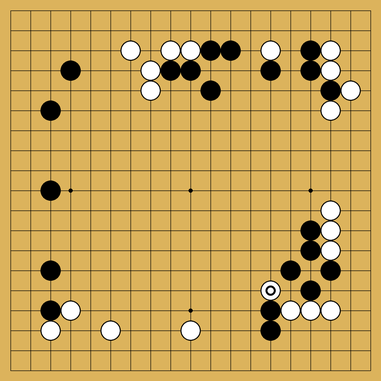 I think I have tackled the questions about HEY HEY for Q15, was there a fight, and A5 and O13, though feel free to ask about that if it’s not evident from what I wrote.

Thank you, I will check it out

@GreenAsJade What the review is telling me, is that everyone knows joseki but me :deeply ashamed but not going to do anything about it:.

Because you didn’t play Q3 at move 5, you gave a huge corner to white and move 35 crystallised the loss by forcing white to solidify the corner. (I think)

Don’t be afraid of setting up a ko when defending 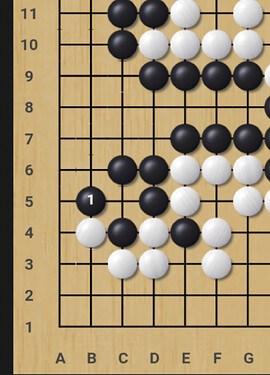 Even if you don’t want to fight it in the end A5 is stronger. When you have two stones on the second line it’s gote for your opponent to push on the first line (white A, black B and white needs to defend at C or lose A) 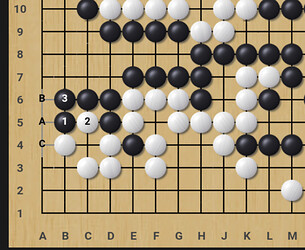 And for the rest of that side, if you opponent plays shenanigans like c8 then don’t ignore it unless you are totally sure you are safe. They probably have a reason to try it and it will be painful to tenuki. (Although it seems it could have been worse but your opponent didn’t take the Snapback: 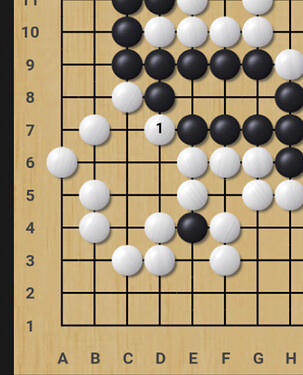 setting up a ko when defending

That’s above my grade

Well, I just mean don’t necessity save the one stone. It is often the case that you can make that ko shape instead and it’s also often a better move

I also made a review: Play Go at online-go.com! | OGS

But I only made text comments in my review, because I feel that a review with variation branches becomes way too ugly/messy/cluttered in OGS’ review system.

What the review is telling me, is that everyone knows joseki but me :deeply ashamed but not going to do anything about it:.

No no! Nooooo! As DDKs we are told we do not need to learn lots of joseki.

I wonder how I gave that impression?

Maybe it’s because it is true that even beginners should know how to approach 4-4?

If you don’t feel it’s worth learning these, it may also not be worth having reviews, because any other lesson will be more difficult than learning these two

Any other comment I may have made about joseki in the review would have been “by the way”.

If there’s one other thing I think is worth learning right from the start it is the approach for finding the next move;

What are all the next big moves

Even better if you can also first think:

You don’t even have to remember this - BHydden has his checklist on his screen while he plays, for example.

Edit: I realise I said “you left the joseki”, which emphasises the joseki again.

You could read this as “you played one stone into danger and then tenukied”. It’s about the fact that the one stone needed support, not the joseki itself. Apologies for the wrong way of expressing it

I’ve been thinking about this joseki business.

I wouldn’t worry about joseki in terms of learning sequences but I think there is value in thinking about your moves in terms of what am I getting, what is my opponent getting, is it fair/even? Which is the answer to the last question is yes then it’s joseki but that’s not really what matters.

For example move 5 looks to get the side. Move 6 gets the corner and points to the other side. Maybe not the best deal for black (giving up the whole corner for “only” the side) but then thinking about what you are trying to get and doing the same on the next move would mean move 7 should be up the side somewhere, supporting move 5.

If move 7 tries to do something different from what move 5 was trying to do then the deal will be even worse. If your stones are all trying to do different things, it starts to go wrong. They should all be on the same team, working together.