I put a self review, mainly catching my though process in the game. Would appreciate any comments.

I made a review with a couple of comments and variations to consider: OGS Team League

I’m not sure what general advise I can give you, but I noticed that you played some moves that strengthen groups of yours that were already pretty strong. For example in the early middle game, around moves 50 - 60. You kept building your corner group, which is already settled. White used this opportunity to seal in your C9 stone, which I believe you should have prevented by jumping out.

//Edit: Thinking about it some more, I feel like you picked the wrong fights this game. Early on with move 24 at Q12 I felt like you tried to avoid a fight, but there was no reason to play so reserved, as white can’t afford to neglect defending their two groups. Instead you should play hane (or answer at the lower right).

Then much later at move 72 you ventured deeply into whites framework. At this point you are outnumbered, so white was able to attack you strongly. Instead you should have reduced from further away, for example with a move at K15, which works well with your group on the right.

I am not strong enough to review the game, but I am wondering about the sequence on the upper right. The joseki is normally used when Black wants sente, so as Black I would have tenukied after White R13.

In the game, Black played 2 more moves in the corner than White, which means that Black must be outnumbered elsewhere on the board. That seems a risky way to play against a stronger player. 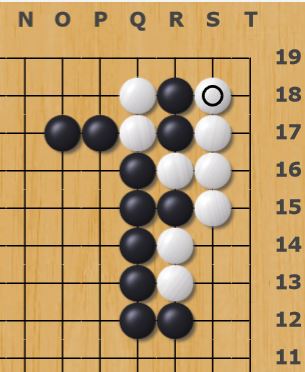 Thanks for the review. I agree with you on all accounts.

Move 72 is a good lesson I had before. I knew this is white territory and I should just reduce, but somehow forgot white could refute like that. Otherwise, I would’ve played at K15 as you suggested.This enforces my memory.

I knew I was giving in in lower left corner, but could not read better. Not that a complicated reading. I blame my vacation on that.

Q13 is actually the AI move.

I thought white can not tenuki, or I will hane. Then when white did, I chickened out and played a simple extend instead.

I did spend time to read the hane and felt it was very much playable for black, but since I couldn’t clearly read out the final outcome, I am actually still ok with this give-in, not because it is right, but my conscious decision. Normally this kind of give-in would not lose the game around my rank. However, if I were playing a 1k, …

Guess, I did not have enough confidence going into the game.

By the way, when I clicked through your game with the automated AI review, I thought that this AI sequence (starting at move 81) was neat: 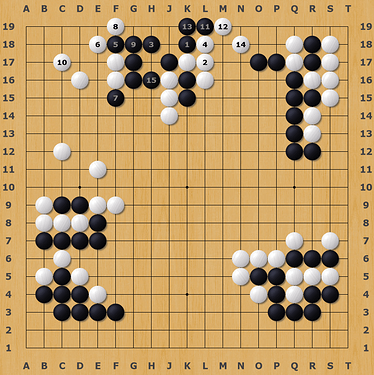 Guess, I did not have enough confidence going into the game.

Don’t let ranks discourage you! Otherwise the game turns into a self-fulfilling prophecy.

Looking at the game again, I find you actually played pretty well until the fight on the top. The most obvious mistake in this phase is move 58, eliminating the ko. Some other minor mistakes:

Some moves I’ll not play as black but can’t say they are bad: