Anyone wants to review my game?

I am particular interested in white move 24, can it cap as shown in Variation Question 1 in the game chat, instead? Thanks very much! 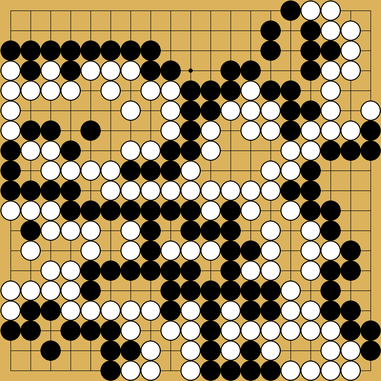 I wanted to make a review but this game turned out to be too complex for me pretty quickly so I just waited for a stronger player, so thank you dangomango for the review it was really useful.

However I have a question for your drifterwolf, were you planning on making this a fighting game when you built two walls top and bottom? For me even though I try to keep it simple it seems there’s always some situation I misread and end up in a fight, which I can’t handle very well. So my question is if you were planning on it or it ‘just happened’ and how do you usually do in these type of games?

For me even though I try to keep it simple it seems there’s always some situation I misread and end up in a fight, which I can’t handle very well.

like you make a moyo, so you expect an invasion, Wah-Lah, fights happen after the invasion
or you just make your standard plays, they still touch your stones and again fights happen
or they just make overplays, you have to punish right?
or you just have a some influence, hm…you can’t use it much unless you aim for some fights to occur attack opponents group or just invading then running out with support for the influence you have
or your opponent makes a decent moyo, you invade…then you try to make life etc.
or you just make some territory…but your opponent is jealous…hm…so he comes in and rob them, you get pitiful influence that you didn’t want…don’t know what to do, it’s fight or lose, so you fight

it seems fights occur left and right, even if you don’t want to
such is life I suppose

and you just give in, eventually those tiny edges that you gave up on will add up one by one and then when the game ended you realize you lost because you tried the whole way to avoid fights

anyways, you can play simple non aggressive games but it all depends on the opponent to let you play such way
even if you play territorial go, you still need to grab them territories right? the more you grab the more your opponent reacts hence a full scale war might break out coz you stole all the territories
i think probably needs alot of reading to gain profitably and doing very little fighting
I believe Lee Changho was famous for simple and solid moves with very little fighting, then win by just playing godlike endgame moves
But, he was good at what he did, not all can be alike

Like me for example, initially I started go and had been taught all kinds of “standard” plays
then when i saw non-standard moves…i try to gain an edge to punish opponents for nonstandard plays
but to punish you need to read deeper than them
you also have to understand why that move was “wrong” to begin with to punish
if i were to just try and keep everything simple and avoid fights, i won’t gain much edge on him right
then i won’t improve much just coz i was trying out of my way to keep everything simple

sure you might lose more than you expect in the beginning with fights all over the place
but you dont have to fight every single time, you can try to fight in your favor everytime (make solid moves/keep weak groups to a minimum/forces opponent to invade your moyo etc.)
so what if you still lose, it’s fine, it’s not like you lose forever
the more you understand, the deeper you read into those moves, you’ll win those fights because the fight started in your favor to begin with!

No, it just happened. I hate 3-4, 5-3 enclosure, so I always approach 3-4, not saying this is right thing to do. Then when it was my turn in opening, it seemed natural to me to build two walls. Of course, my opponent could not tolerate it and tenuki to split. With two corner gone, I had to attack.

For the past few months I’ve noticed that by playing more ‘simple’ I end up building a lot of influence, which is another thing I’m afraid of because that as you said leads to invasion and a nasty fight lol So yeah I’ve been trying to move toward a slightly more aggressive play just to get use to this a bit more, and follow some common ideas like fight for profit, keep groups separated, etc.
I guess the difficulty lies in knowing which fights are worth it, and then of course understanding the purpose of that move your opponent played that you know it’s bad but not sure how to punish. I think basics only take you so far right?

any fights you find you have surrounding/supporting stones/group nearby go for it, because fights will go in your favor most likely(imagine 2 guys ganging up vs 1 kid)…unless you mess up which happens to us all the time(opponent knows kongfu and ko 2 of you)…but when you review those games you will understand a bit more about your mistakes

knowing a move is bad might not necessarily mean you can punish
but you try to go for a punishment like mentioned above, sure you missed out on the punishments but once you review the game later on, you might find how you didn’t punish your opponent
the purpose of all this is to get stronger in your game, you might drop a rank or two doing something you’re not used to like attacking opponents weak group trying to gain a profit, but in the end you gained nothing…but those games that you think you gained nothing, once you reviewed them, you might have become a stronger player, that you will learn from your mistakes and actually attacking + profitting later on when it happens again in your games

I think basics only take you so far right?

depends on what you mean by basics
like tsumego for example is super basic, but can take you super far
basic opening is making bases, keeping groups healthy and alive
then is stones efficiency, trying to make your stones work for the maximum value
then is shapes, eyes, etc., if you see opponent as no eyes or only 1, it’s a weak group right
can attack, surround, or tenuki waiting for a chance later
then you know attach/diagonal move is strengthening both sides right? then you can attach/diagonal move on opponents stronghold to gain something out of it that were initially your opponents foothold to begin with right? or you were chasing a group then all of sudden you attach to a far away opponents base to gain some outer stones to help you surround the group you were chasing

these so called basics can take you very far, but require deeper thinking and more usage of the so called basics
unless you go for pro…which you need mad calculations and learn from the AI
and all those basics might go out of the window besides tsumego…

I know what you mean, a while back I downloaded a few of the games that I played on KGS a few years ago when I was in my ~10k-15k (I’ve been playing on and off) and actually I could remember some of the reasons why I made a particular move, even though I was able to understand today the reason why it was a bad, or not the optimal move.

For me basics comes down to keep your groups connected and split your opponent, and only attack for profit or when situation is already bad for you. I tend to lose myself trying to follow these simple steps but like you said, it’s a slow process I agree and I don’t intend to make it to pro in any case so I’ll take your wisdom and take it one step at the time, and I’ll risk making that mistake just for the sake of what happens, then get stronger for the next game

I don’t think this game is particular complex. It’s influence attacking one group only with no other weak groups on the board. It looks complex only because so many moves played for the attack. I never had expectation to kill the group. the prolonged or ugly fight reflected the strength or weakness in this case of players who could not read out too far like stronger players, thus settled or agreed with an intermediate result and moved on playing other places. Stronger players in my position might also choose to play other places first to prepare the attack etc. That would be complex.

But thanks for the compliment.

I forgot to mention also the two wall formation is a text book opening example favoring my side because one extension move for two walls, thus we don’t see it often in real games. Again, i did not design it when i approached two corners and just got there by accident. lol