Half point game. Mostly it felt very congested, with lots of running fights instead of territory building. I felt behind for pretty much the whole game, which I think was part of the problem with how I played. I overplayed in a few key points because I was trying to figure out a way to kill big things because I thought I was behind, rather than playing principled moves aimed at building territory. (Also: I wasn’t paying enough attention to the fact that my opponent had a big weak group on the right. Tunnel vision definitely showed its face.) The AI, however, says I was the one ahead for most of the game, and the final score came out slightly tilted in my favor, despite a few last gasp endgame mistakes costing me a few points.

I think my questions on this game are threefold: first and second, what could I have done to have played a more principled game, and what thought process should I be following to find those moves instead of ending up in the capturing scrambles I felt like this game revolved around. Lastly, how should I be estimating score in this game, particularly as it pertains to my opponent’s territory in the top right, which I think I overestimated and as a result overplayed to catch up to. 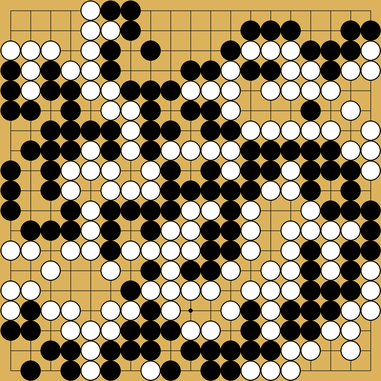 I’m the same rank as you and not strong enough to answer your questions but I looked at the game anyway.

I think the biggest thing I would have done differently is the left side.

And then ignoring shoulder hit made you kick black with E17 reinforcing them, I didn’t like that.

Generally I think you’re supposed to wait for an opportune moment to do something about these big looking structures like on the top. In my game I would maybe claim the left side and after that if my opponent lets me just invade the top. Moves like H17, J16 or K17 come to mind.

Top probably what made you feel behind in the first place, so what not invade it instead of fighting for middle.

Wanna be study buddies? Review each other games?

Thanks for the review! Good stuff to think about.

H5 is definitely a slow move. I’m not fighting over enough territory for it to matter, and taking the left side is bigger. Katago, interestingly, says that the side (while better than H5) is still the wrong direction of play, highlighting P17, S4, and M9 as optimal in some order. P17 is katago’s best way of reducing the top, and it’s a fan of the move for most of the game. There’s a ton of aji around playing that move, then cutting. White gets forcing moves on the outside and is able to reduce black’s corner substantially, or at least gets a few corner moves in sente earlier on in the game and aji for later. I didn’t read that out, and I think I’ll generally have trouble doing so until my reading improves a bit more. The other two moves are less of a reading issue, and more of a recognition that black’s group on the right isn’t actually alive. Playing a few forcing moves to point that out gives white’s middle group more shape, and gives white a target for later. My biggest mistake in the game, according to the AI, was no recognizing that group as weak. Even later in the game when I was losing the middle group, I was actually way ahead because there was no way for black to both save the right and kill the middle. Not attacking cost me my entire lead and then some. (I also misplayed the P17 move once I finally played it, taking a small capture instead of leveraging it for aji. There’s a huge possible reduction of the top if it’s played right.)

I think, for me, I should’ve played S4, P11, and then D10. My reading isn’t good enough to find the sequence on P17 (though I’m certainly going to try to remember katago’s tesuji up there, or at least remember to look for similar things in the future!), and I don’t want to get unnecessarily bogged down in trying to attack things when there’s big moves on the board, of which D10 is certainly an example. However, the S4 and P11 moves are forcing moves that cost my opponent eye shape. They’re big enough that he can’t well afford to ignore them, and they have tangible benefits to my play. I should look for those moves and play them immediately, rather than waiting until later in the game. Even if I don’t end up going after those stones, they’re free and are functionally creating aji by weakening my opponent.

For the top, I think my paradigm should be that it’s big, but not urgent (barring good aji moves like P17, if I can read them.) Any stones I put up there won’t be generating territory, so I’m better of playing away until a good opportunity presents itself that won’t leave me running with a weak group. It’s solid territory, but it’s also almost all of the territory that black has on the board. I can busy myself with the rest of the board and win without ever really needing some brash invasion to smash what black is building. (J16 is the AI’s preference for “brash invasion”, and likely something I need to learn to play at some point.)

I’d definitely be down to be study buddies; I’ll send you a friend request.