anybody have a look? 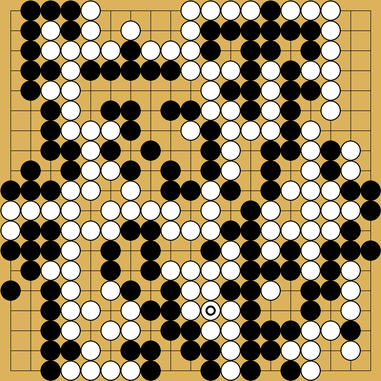 I think you should’ve addressed white ignoring you on the left instead of approaching the top right. That’s the only big looking thing that I can call a mistake. It’s hard to tell with unorthodox openings.
In the game overall white played with points in mind while black seemed to have just been playing stones and shapes. Throughout the game it was always unclear where black’s points are.
The fighting was equally bad I think so I’d say the opening had the biggest effect on the game. It was a special opening with all the special corner moves but somehow it came across as undercooked. For example the lower left initial position played into a supposed moyo from the lower right to-be-high-enclosure, which it has never become, and then the “moyo stones” were given up for a 10 point corner with no outside aji instead. On the top black played thin which implies flexibility, but when the shape got attacked the flexibility of the position wasn’t utilized and it ended up a heavy group.
If you’re looking to push it past this rank I suggest you work on your opening by going over pro games (not necessarily modern games, just any pros) and think more about territory.