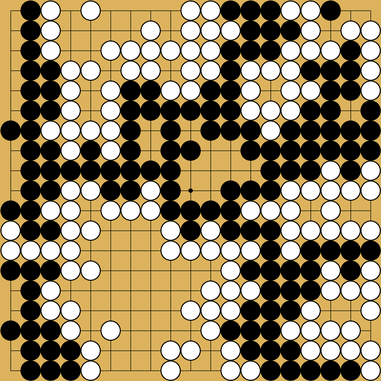 Here’s my self-review, done with goreviewpartner/leela. It covers the first 120 moves or so, since by that point I should be lost. I gave up on reviewing around the point where Leela’s top move choice is “resign”: 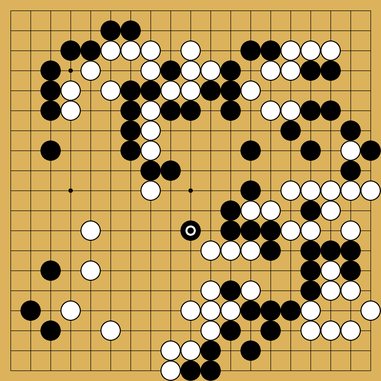 Basically, my middlegame is kind of awful. I came out of the opening with a slight advantage, and then slowly frittered it away with bad midgame play. However, my opponent made a bad endgame mistake and lost a huge group, which gave me the game. Then he makes another endgame mistake and looses a small group. He then proceeds to fill in a bunch of his own territory.

I think my two biggest midgame problems are bad direction of play, and being overly passive.

On the first point, I have difficulty finding the right way to grow my territory. I should be more attentive about making sure that I’m looking at what aji my opponent has to attack, and trying to find prophylactic moves that fix my shape or attack my opponent, instead of just extending the walls of my territory further up the board.

On the second, I’ve been burned by getting into big, ugly fights and losing huge groups in the past, so I play moves to make sure that I’m alive, when I should really be taking advantages of cuts and aji. Once the outside is done, if I still need to, I can live locally. So long as my outside moves are sente, I’ll have the same local opportunities after the outside is played out. (Plus, if I live outside, then the local moves are just endgame and I can find big points elsewhere.)

Is that a fair assessment of my play? What else did I miss, and what should I be doing to improve?