does anybody mind have a look at my game: 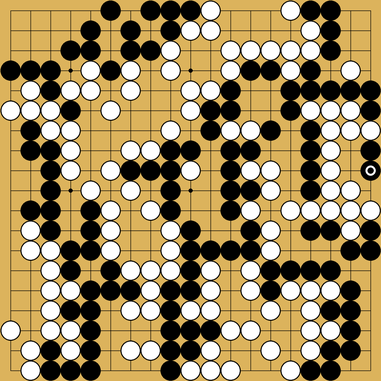 I dont have any specific question this time. Just wanna know, at what aspects of my game i have good and bad habits. (for example shape, opening, midgame, endgame, fighting etc)

I would love to have somebody have a look.

Obviously, life and death is one of your main weaknesses.

I also noticed the following bad habit: make forcing moves that help your opponent more than you. For instance

Both players need to reconsider points.
You seem to be too concerned about the middle. Q5 feels like you want to make the middle smaller. F14 is playing for the middle as well. N5 and E10, too. There are actually so many moves in the middle, so it feels like a bad habit. You should instead go for certain points. Probably the best advice, I can give you, is a Korean guideline for the opening:
First go for the corner (approach and josekis). Second you go for wide sides. Third you go for big points.
Try not to thing to much about the Japanese “First go for important moves, than for big moves” - with your habit, you probably overvalue the importance of middle moves.