can anybody have a look at my game pls and put some comments on: 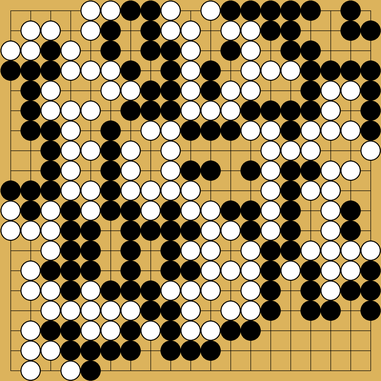 I have no specific question, just wanna know, where i lost track basically. If you like, you can put up some variation.

Your first mistake was at move 15, it looks like you missed a ladder: 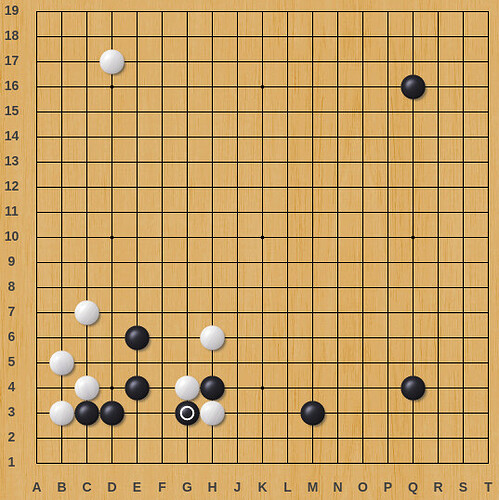 White can capture your stone in a ladder: 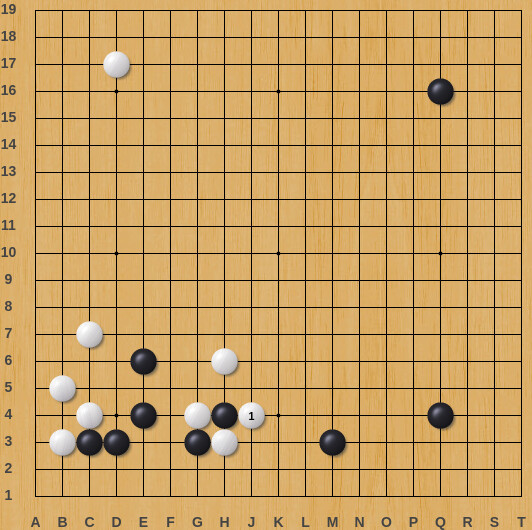 That would be a very good result for White. Instead, you could have tried to cut the White stones and break the ladder: 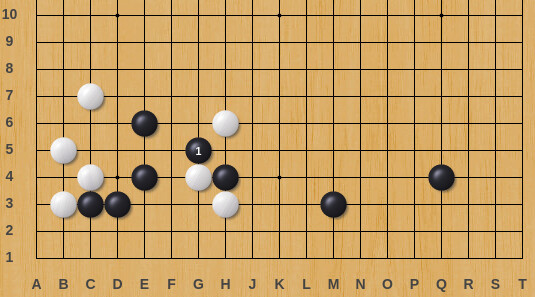 This would result in any of these two situations, both very good for Black: 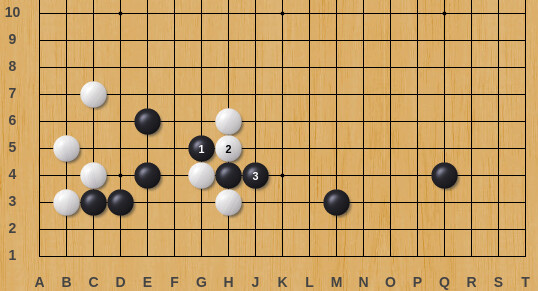 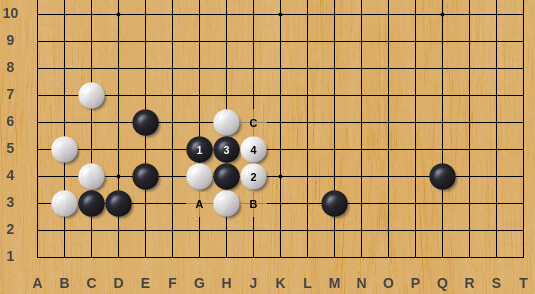 In the game, White missed the ladder too, and the result is extremely good for Black. 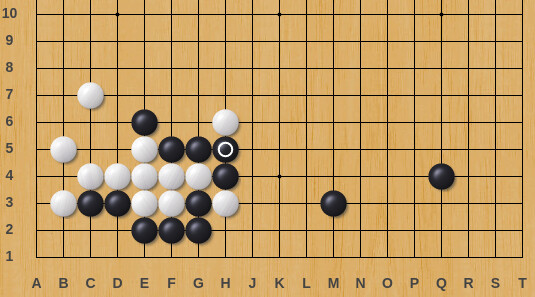 White’s group is a big blotch of inefficient stones, while Black is building influence towards the South side, the East side and the centre. Awesome for Black. 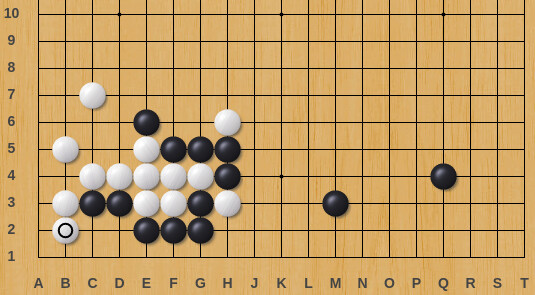 This is a second-line move. Here is one important advice: every time your opponent plays a second line move in the opening or in the middle game, consider tenuki.

Here you have the opportunity for big moves: 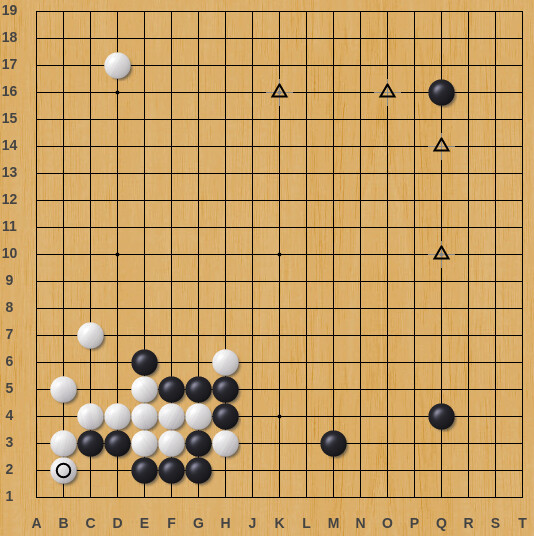 All the points I’ve marked are very big moves that Black could play now.

Instead you played this move: 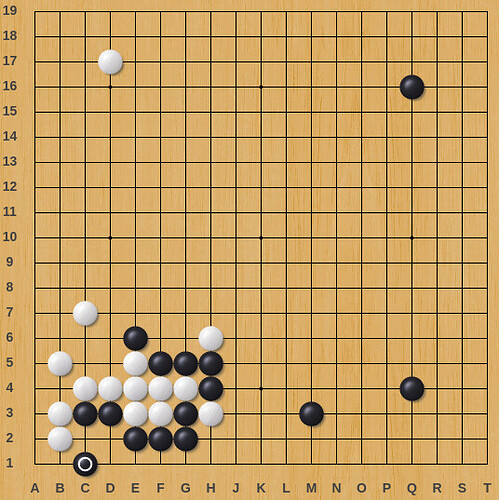 Also note that the White stone at H3 is a bit dangerous, and with your move at C1 you haven’t removed that danger. If you’re afraid about this danger, you could play at J3 instead of C1. If you’re not afraid, then I recommend playing elsewhere, one of the huge opening moves that I’ve marked on the board.

At move 35 you played a move which is a bit unusual: 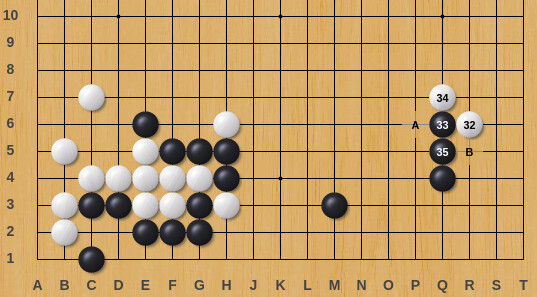 In this situation, Black usually plays at A or B instead. A develops the centre while B protects the corner. 35 is an inbetween move that doesn’t develop the centre as well as A, and doesn’t protect the corner as well as B.

At move 37 you approached White’s corner: 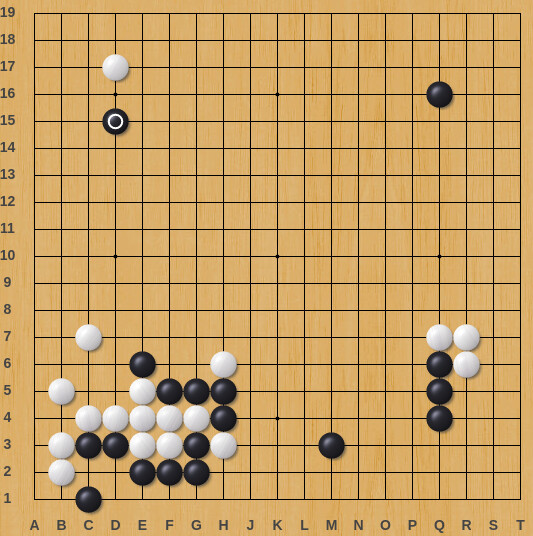 Approaching the opponent’s corner in this way is often good in the opening. However, you have to think about whole-board strategy and direction. What is best in this position, approach White’s corner from the West side, or develop your large area of influence on the East and North sides?

White also has a weak group in the Southeast corner. I think that a Black move near Q10 or P7 could put a lot of pressure on the White weak group, while developing Black’s area of influence. At this point in the game, developing Black’s area looks like a simpler and more efficient strategy than invading White’s area on the West side. This is because Black’s area has the potential to be much larger than White’s area, and Black has the initiative, so if both players just develop their own zone, Black will surely win.

For instance, this would be extremely good for Black: 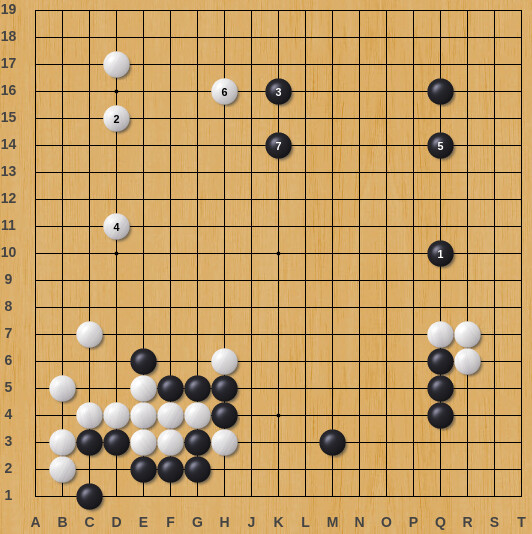 At move 51 you let White tear through your keima: 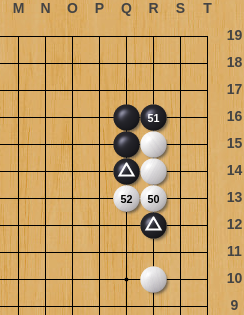 A torn keima is a very bad shape. If you have a keima, you want it to stay connected. Or at least, if your opponent cuts, you don’t want the cut to be as clean through as this torn-keima shape. So, your move 51 should have been at 52.

If you believe that protecting the corner is more important than connecting to your R12 stone, then you should anticipate and protect the corner right away, to avoid that torn-keima shape: 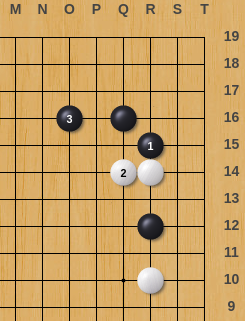 Now the Black stone at R12 is separated, but it has more liberties and is not stuck against the White wall, so fighting is going to be a lot easier for Black that with the torn-keima.

At move 67 you appear to have misread a ladder again: 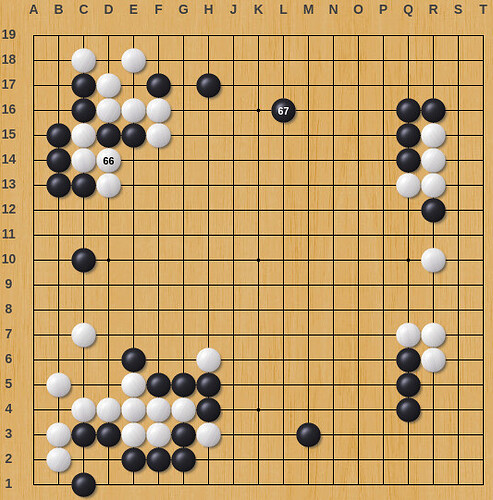 Here, saving your cutstones is easy: 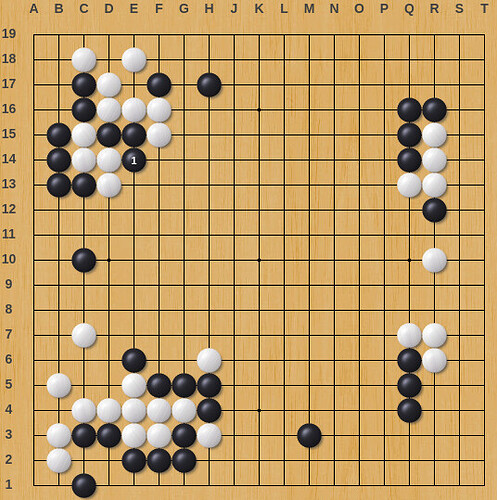 There is no net and the ladder is good for Black. The four White stones around D14 are in an extremely uncomfortable position. 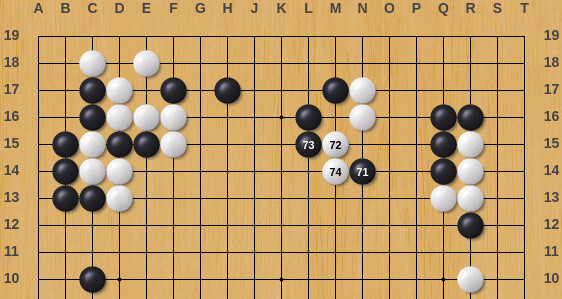 Torn-keima is bad for you!!