Hi guys,
This is my first post on the forums. I starting playing Go years ago but have recently started playing again during the lockdown.

I just played a 9x9 game and the AI review seems to think I was winning easily for most of the game up until move 41 where I lost the game.

I have two issues: 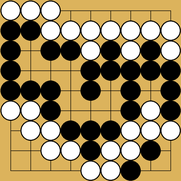 I think this link should show you the game.

Welcome to the forums!

The answer to question 2 has to do with counting. At 19k, you may not think you’re at a point when counting matters during your games. But it mattered here because the score was so close. I assume you know how to count territories, but maybe you don’t know how to count move values yet. To count a move value, you need to compare the value of playing there with the value of your opponent playing there.

Take my variations for your C4 move. Variation 1 is you playing there, and variation 2 is your opponent playing there. The difference is 1 point, because Black lost 1 point and White gained 0. So, following this process, you can see that C4 had some value, but the value was small—only 1 point.

Now take my variations for J8. Variation 3 is you playing there, and variation 4 is your opponent playing there. The difference is 3 points, because Black lost 1 point and White gained 2 points. As a result, J8 was 2 points better than C4. And it so happens that Black’s lead was fewer than 2 points.

I suppose that answers question 1 as well, because the 99% win rate might make you think you were winning by a lot when it just wasn’t true.

That’s really helpful, thanks a lot.

I’m still confused though because I lost by 16.5 points, so although I see how I would gain points through the moves outlined but I still don’t see how the AI thinks I was winning up to that point.

I have made you a short review further illustrating some of the difficulties for that position and the winning condition the AI saw.

I am not sure how far you have gotten in your Go studies, as a prerequisite for understanding the position you need to understand the concept of “two eyes to live”, you can read about that one here: https://www.learn-go.net/lessons/06/

And here is the review:

It is a complicated situation that requires either a lot of reading or a lot of experience to figure out, but hopefully it will explain the AI review for you. Often times the AI review can be more a burden rathen than a help for newer players to figure out by themselves, so kudos on asking

keep them coming if you have more questions.

I do understand all the key concepts you mention, just failed to spot it.

Thanks so much for clearing it up for ne